OPP use spike belt to stop vehicle on Hwy. 400. One man arrested, other still at large 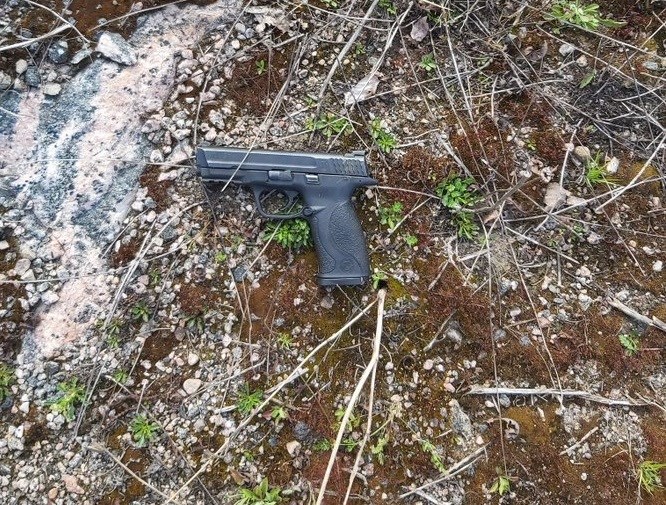 OPP seized this gun along with drugs. Courtesy OPP

PARRY SOUND — Police seized a handgun, body armour and $160,000 worth of drugs from a vehicle that police stopped using a spikebelt on Highway 400 Monday evening.

One person is under arrest charged with weapons, drug and traffic offenses. A second man still at large, although police say they are no longer searching the immediate area for the suspect.

West Parry Sound OPP responded to a report of a vehicle traveling northbound on Highway 400 that had previously failed to stop for police. Officers used a spike belt to stop the vehicle in the median of Highway 400 at Highway 559 and both of the occupants fled from the vehicle.

One man was immediately arrested and the second fled into a wooded area.

The OPP Central Tactics and Rescue Unit, Aviation Services, Tactical K9, and Emergency Response Team were called in to help search the area but were unable to find him.

The suspect is described as:

Should you wish to remain anonymous, you may call Crime Stoppers at 1-800-222-8477 (TIPS) or submit information online at www.tipsubmit.com where you may be eligible to receive a cash reward of up to $2,000.

Province providing $1.4 million to ramp up production of Ontario-made masks
0

You might lose weight on keto, but it’s not the healthiest way to do it
0