Boxer-Labrador held by shelter for more than two months after being considered a pit bull; humane society takes exception to 'false stories' spread by dog's owner
0
Sep 18, 2019 9:57 AM By: James Hopkin 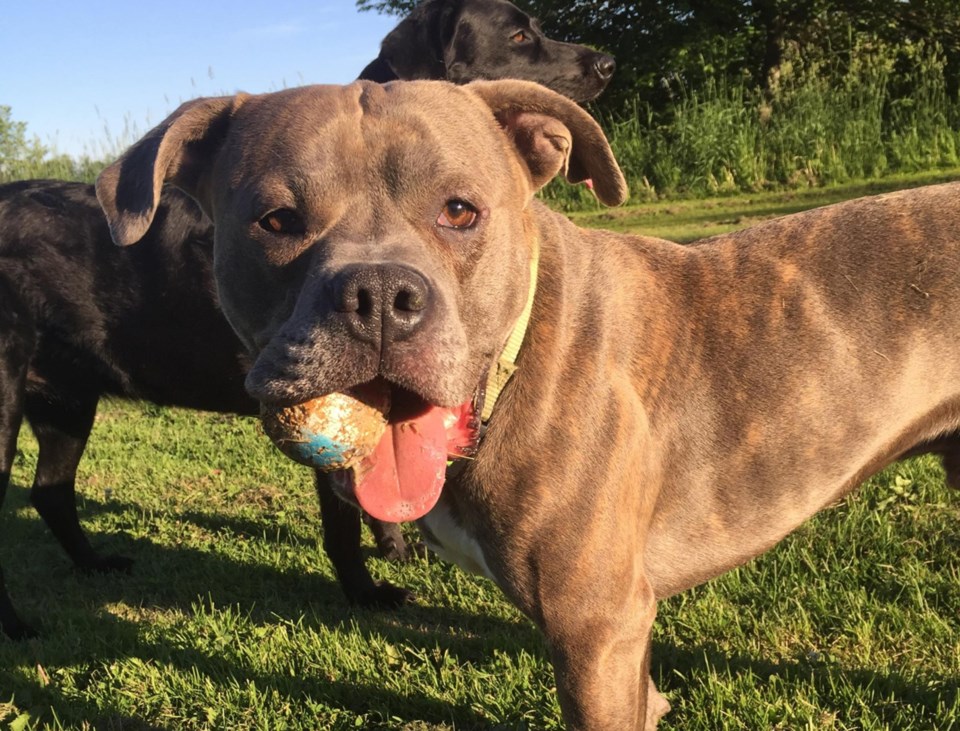 This Boxer-Labrador mix named Odie was held by the Sault Ste. Marie Humane Society for more than two months after owner Jennifer Santana couldn't prove her dog was not a pitbull. Odie was eventually released back into Santana's care Aug. 29. Facebook photo

SAULT STE. MARIE — The Sault Ste. Marie Humane Society says it has served a cease and desist letter to a local dog owner following a number of accusations that the organization maintains are false.

On Friday, the humane society issued an open letter containing a timeline of events detailing its rift with Jennifer Santana, whose dog, Odie - a Boxer-Labrador mix - was held for 65 days by the not-for-profit organization after he was considered a pit bull.

“These false stories and the social media misinformation it generated incited others to participate in disparaging commentary, including threats and defamatory comments to shelter staff,” the letter read.

According to the humane society’s statement, Odie was apprehended June 23 by an animal care and control officer after being discovered by two people on Goulais Avenue without any identification.

The humane society says Santana contacted the animal shelter the following day in search of her “three-year-old blue-brindle pit bull.”

“A search of city dog license records indicates this dog has never been registered to this owner and does not have a current city license. Staff advised Jennifer Santana that she would require evidence/proof (i.e. veterinary records) that Odie was not a pit bull for it to be released,” the statement from the humane society read.

The animal care and control officer, the humane society says, noted discrepancies in the paperwork that was produced for Odie.

“The humane society reviewed the document from British Columbia; several discrepancies were found, most notably his birth date showing him to be [one-and-a-half] years old, his first vaccine being administered at [six] days of age and that [two] cat vaccines had been administered to the dog,” the statement read.

Santana was eventually charged for owning a pit bull under the province’s Dog Owners Liability Act.

“No one had provided verifiable information that the dog was not a pit bull,” the humane society statement said. “Jennifer Santana reported the dog as a pit bull and refers to him as such in social media posts. Matters were further complicated by Jennifer Santana's providing unverifiable documents.”

“At this time, charges were laid against Jennifer Santana for owning a pit bull and allowing a pit bull to run at large were sworn June 27 and served by July 2.”

The charges against Santana were dropped in a Sudbury court Aug. 27, and Odie was ordered to be released back into Santana’s care the next day.

Meanwhile, the humane society says that Santana made a number of false claims leading up to that point.

”The charges were withdrawn by the court, therefore there were no court orders made nor findings by the court in respect to the breed of Odie.”

The humane society says that Santana is now claiming that Odie came back from the local animal shelter with eight broken teeth, and unable to eat.

“Jennifer Santana made several social media posts following her phone call to the shelter on August 29 where she made allegations of the injuries Odie suffered, posted pictures of the same, and numerous claims that put into question the humane society’s governance and operating practices.”

The organization also alleges that Santana has been spreading misinformation by talking to the Huffington Post and other media outlets.

“These false stories, and the social media misinformation it generated incited others to participate in disparaging commentary, including threats and defamatory comments to shelter staff,” the humane society said.

Santana could not be reached by SooToday for comment.

“We will not be providing any further comment to the released statement at this time,” said Sault Ste. Marie Humane Society Shelter Manager Cindy Ross.

Backcountry camping is open once again at Ontario Parks
0