The comet, first discovered in March, is now travelling away from Earth but will still appear in the northwest sky between 11 p.m. and midnight for the next several days.
Jul 24, 2020 1:00 PM By: Doug Diaczuk 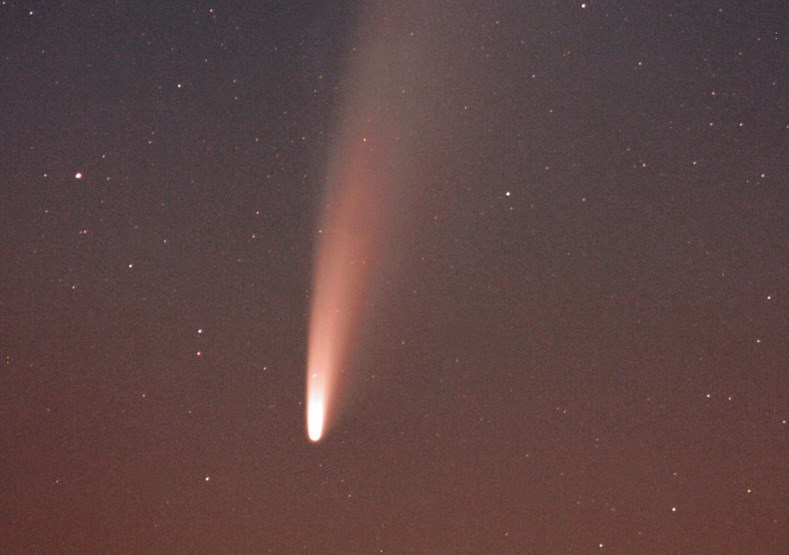 THUNDER BAY - Stargazers hoping to catch a glimpse of a visiting celestial body passing through the solar system better look to the night sky soon, because it’s light is starting to fade as it journeys back into interstellar space.

The comet NEOWISE, first discovered in March, survived its orbit around the sun and is now quickly hurtling away from Earth.

“You probably only have until the end of this weekend,” said Thunder Bay astronomy enthusiast, Dave Gallant. “It’s getting dimmer, so now it’s a good chance to get out and try to get a picture of it.”

For the next several days, NEOWISE can be seen in the northwest sky between 11 p.m. and midnight just below the Big Dipper constellation.

“Look halfway to the horizon below the Big Dipper,” Gallant said. “If you have a pair of binoculars look for a fuzzy streak in the sky with a pinpoint end on it.”

Images of the celestial visitor have been circulating widely on the internet, with stargazers snapping pictures from around the world.

According to Gallant, comets as visible as NEOWISE are a rare sight in the night sky.

“Comets are not very often in our night sky,” he said. “A lot of them orbit the sun just like we do and this one takes about 6,000 years, so it’s a once in a lifetime comet to see.”

“A lot of the comets don’t survive their trip around the sun. They get to close and are made up of ice and dirt and water and they get sucked into the sun or melt and evaporate. The fact that this one did and we get to see it is pretty cool.”

NEOWISE survived it’s trip around our star in July, producing the familiar tail comets are known for from the heat evaporating ice and water inside the comet.

If you happen to miss out on catching a glimpse of NEOWISE, there is another astronomical sight to keep an eye out for, one much closer to home.

The International Space Station is expected to make several passes over the city in the coming days and it’s kind of hard to miss if you happen to be looking up.

“We are in the middle of a number of International Space Station passes overhead,” Gallant said. “It looks like a bright star travelling across the sky. It takes five minutes to travel from one side of the sky to the other side. There’s a period of time for two weeks every two months that you will get three or four passes a night.”

“You think about there is five people floating in space about 400 kilometers above us.”

Several websites can help you track where and when the ISS will be passing overhead.

To see NEOWISE all you need is a clear line of sight to the northwest. Being outside of the city and away from light pollution will also make it easier to spot.

Hot, humid day with a good chance of showers, risk of a thunderstorm
0