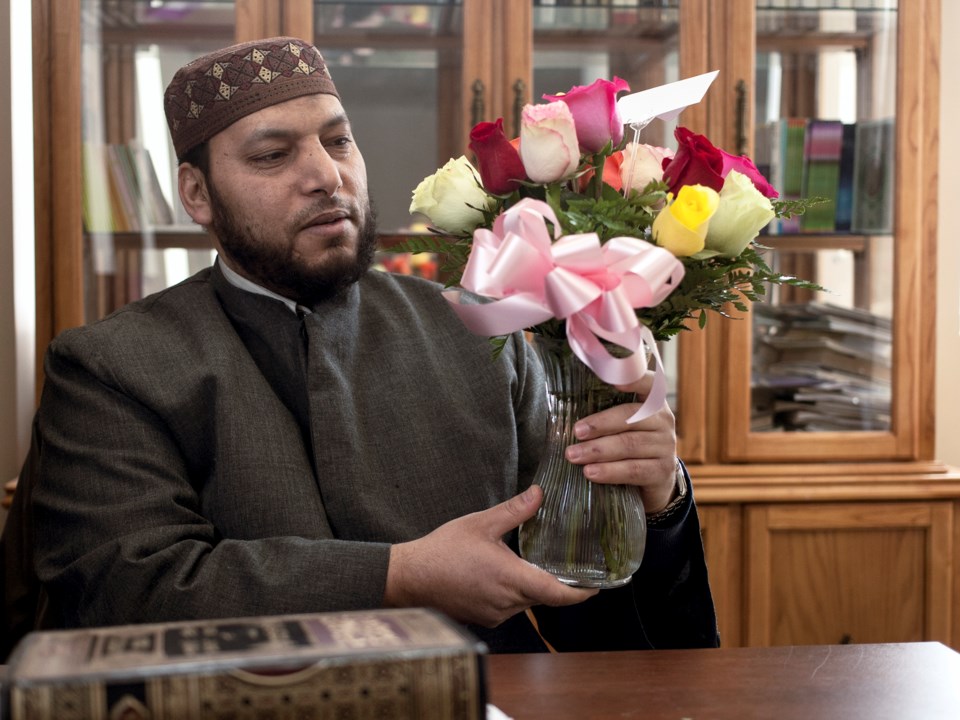 Imam Saber Alkilani looks at flowers offered by members of the Sault Ste. Marie community in response to the terror attack in Quebec City. Kenneth Armstrong/SooToday

While he condemns the violence experienced yesterday at a Quebec mosque, a local Muslim spiritual leader said he is overwhelmed by the outpouring of support from the Sault Ste. Marie community.

Saber Alkilani, imam at the Sault’s only mosque, said he was shocked when he heard yesterday about an attack at a Quebec City mosque that has killed 6 and wounded 19.

Alkilani said he spoke of the terror attack while presiding over prayer this morning.

“It makes everyone get scared. I believe many brothers and sisters are feeling terrible and afraid to come to do their daily prayers,” said Alkilani.

He is telling worshipers to live their lives as normal.

“We have to wait for the investigation to lead us to what happened exactly,” said Alkilani.

Alkilani said he believes some acts of violence against Muslims have been the result of Islamophobia.

“They just hate Muslims because of what they hear from the news. I believe Islamophobia should be stopped and we have to be honest with ourselves. There are many Muslims in your community — your neighbours, in your colleges. They are peaceful people and they are living their lives as you exactly — nothing different,” Alkilani said.

Recent efforts to restrict travel to the United States by refugees from some Muslim countries isn’t helping, said Saber Alkilani.

Recent words by Prime Minister Justin Trudeau — both in welcoming refugees to Canada and condemning the terror attacks in Quebec City — have been welcome, said Alkilani.

Yesterday and today, flowers, gifts and words of support have begun to arrive at the Towers Street mosque.

The outpouring of support has meant a lot, Alkilani said,

“To show their support for us and to give us some nice words, to make us feel like we are not alone,” said Alkilani.

“It’s a very good message and we really appreciate it so much. It makes our community feel a little bit safer,” he added.

One bouquet of flowers, which was delivered early this afternoon, was simply signed 'a friend in your community'.

Additionally, Alkilani said the leader of a Christian church in town reached out to him yesterday to show support.

“Last night he sent us a message saying his heart broke when he heard the news in Quebec. He said, ‘We are with you,’” said Alkilani.

“This message makes us feel so good — to find somebody outside the Muslim community telling you we are here with you, to support you,” he said, adding, “It gives us a good feeling, we are not alone.”