Retired Gen. Rick Hillier, the head of the province's vaccine rollout, announced the timeline Wednesday while noting the schedule is dependent on supply. He did not provide details on when residents younger than 60 could expect a vaccine
Feb 25, 2021 7:00 AM By: Canadian Press 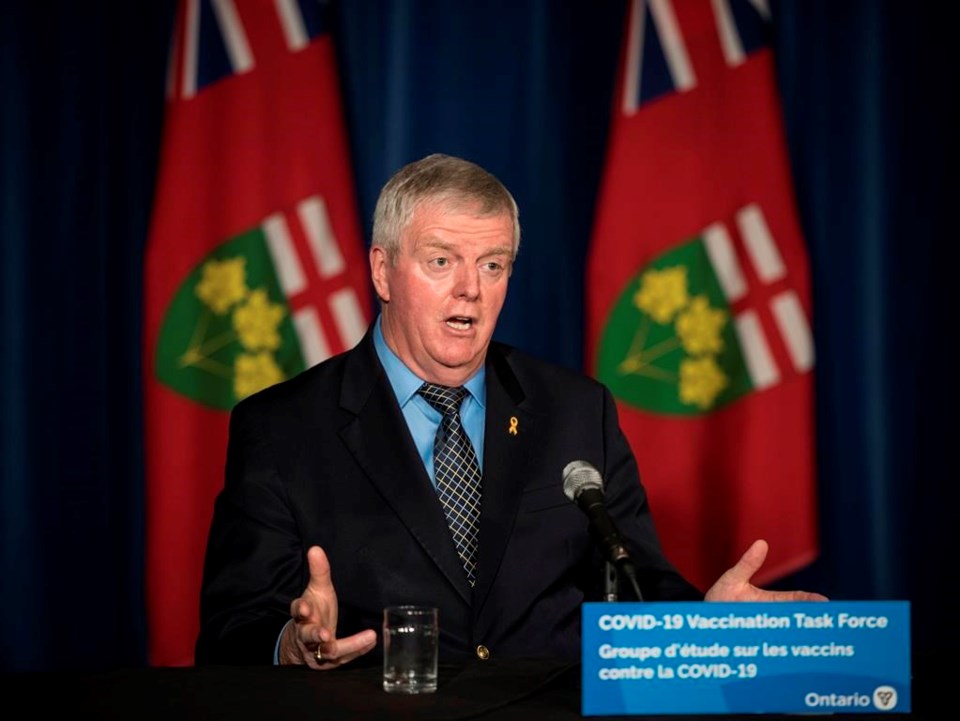 Retired Gen. Rick Hillier, chair of the COVID-19 Vaccine Distribution Task force, responds to a question during a press conference at Queen's Park in Toronto on Friday, December 11, 2020. The head of Ontario’s COVID-19 task force aims to begin inoculations for people aged 80 and older in the third week of March. THE CANADIAN PRESS/ Tijana Martin

TORONTO — Ontarians aged 80 and older will start receiving COVID-19 vaccines in the third week of March, with the province planning to target seniors in decreasing five-year age increments until 60-year-olds get the shot in July.

Retired Gen. Rick Hillier, the head of the province's vaccine rollout, announced the timeline Wednesday while noting the schedule is dependent on supply. He did not provide details on when residents younger than 60 could expect a vaccine

An online booking system and service desk will become available on March 15 and people in that 80 and older age range, or those booking for them, can access it, Hillier said.

Residents will be notified about the availability of vaccines through media announcements, flyers delivered to households and calls from health units, said Hillier, who asked that families and community groups help those 80 and over book their shots.

"Let's make sure we look after them and help them get that appointment," he said.

People aged 65 and older will be vaccinated starting June 1, and those 60 and older can get their shots the following month.

Vaccinations in populations considered high-risk, including Indigenous adults, will be ongoing as the province targets seniors.

Essential workers will likely begin getting their shots in May if supply allows, but the government is still deciding who will be in that group.

Critics said the government was taking too long to launch the online booking portal and get seniors their shots.

NDP Leader Andrea Horwath said it's "terrifying" that vaccines for those 80 and older won't be available until mid-March given that the province has recently loosened public health restrictions.

"Seniors, particularly vulnerable folks, need to know the information. When is it coming? What are the basics? And why is the province of Ontario so far behind," Horwath said.

"There's no doubt this rollout is being botched by the Ford government."

Dr. Nathan Stall, a geriatrician at Toronto's Mount Sinai Hospital, called the province's vaccine rollout to seniors slow and "extremely disappointing," noting that the group represents more than 95 per cent of COVID-19 deaths in Ontario to date.

He said the plan to vaccinate essential workers at the same time as older adults will complicate efforts, and called for greater transparency on how groups are being prioritized.

"Let's simplify it and let's focus our supply of vaccine where we know deaths and hospitalizations are occurring," Stall said in an interview.

Hillier said he would have liked to see the booking system up and running sooner but noted that it hadn't been required for the high-priority populations the province has so far focused on, such as those in long-term care.

He added that some private-sector companies with large operations have offered to vaccinate their essential workers, their families and communities when the time comes and the province intends to take up those offers.

Premier Doug Ford said his province is lagging behind others -- such as Alberta -- in offering vaccines to adults under age 80 because Ontario has a larger population with more people in long-term care.

He said the rollout is focused on those most at risk and argued the plan depends on supply.

"The bottom line is, we need vaccines. If we had millions of vaccines, it'd be a lot easier," Ford said Wednesday.

"When we get to that point, everyone will know when their turn is coming."

Shots will be administered at pharmacies, mass vaccination sites, mobile units and smaller sites depending on the public health unit.

The vaccine rollout will enter a "transition phase" next week, with inoculations resuming among patient-facing health care workers, Hillier said. Shots were paused for that group last month as the province focused on vaccinating long-term care residents amid a shortage in dose deliveries.

Supply will determine whether Ontario meets Prime Minister Justin Trudeau's pledge that all Canadians who want a COVID-19 vaccine will have one by September, Hillier said.

"I'd love to say, yeah, you know, by Labour Day weekend we're gonna have every single person in Ontario who is eligible and who wants a vaccine to have one. I'm a little bit reluctant to do that, because it depends on the arrival of those vaccines," Hillier said.

"I say this, if the vaccines arrive in the numbers required, we'll get them into the arms of the people of Ontario."

A total of 602,848 vaccine doses have been administered in the province so far.

Ontario reported 1,054 new cases of COVID-19 on Wednesday and nine more deaths linked to the virus.

Also on Wednesday, the provincial government announced a plan to spend $115 million on training for personal support workers in health and long-term care.

The program set to begin in April will shorten college training for the workers to six months.

This report by The Canadian Press was first published Feb. 24, 2021.