Column - The birds of spring are back

The first American robin arrives in March in Greater Sudbury. Males, with the darker black head and richer red breast stake out a territory near our homes and sing their hearts out to attract a mate.
Apr 19, 2015 6:38 PM By: Chris Blomme 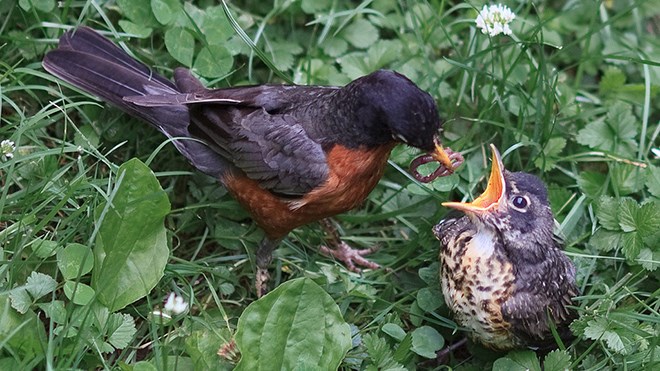 Spring is a busy time for the American robin. Photo by Chris Blomme.

The first American robin arrives in March in Greater Sudbury. Males, with the darker black head and richer red breast stake out a territory near our homes and sing their hearts out to attract a mate.

In April and May a better half is found and the mating begins with nest-building on the agenda.

Robins are wild but our neighbours. They will choose nest sites that are sometimes accommodating to our entertainment but other times a bit of a nuisance. Nests placed over our entryway or on a useful outdoor lamp post can make for trying times.

The good news is that they don’t need the nest site for long, so patience has its own rewards. The nest is made with a mud bowl and encased in dried grasses and plant matter.

Eggs are laid roughly once a day until a full clutch of four is formed. The female will then incubate the clutch of eggs for 12 to 15 days. When the eggs hatch, the altricial young are almost naked and need to be cared for by the parents.

Food in the form of earth worms and insects are brought continually by the parents and the birds grow quickly. Here is when the tricky part starts.

Young birds begin to leave the nest or fledge at about nine to 16 days after hatching. They still will need the care of the parents for several weeks but when they first leave the nest they become very vulnerable to cats, crows, and human activity or interference.

Young birds hop out of the nest and on the first day are sometimes in peculiar places like the lawn, porch or driveway. They are not orphans. The parent birds have four mouths to feed and will try and draw their young into the shrubs and trees and out of obvious locations.

It is at this stage that young birds are found and believed to be orphaned. If a young fledgling is found in a dangerous area it can be carefully moved in a hat or bowl to nearby cover like a tree or shrub and left on a perch low to the ground.

If the fledgling looks safe leave the area. Out of sight you may watch what happens. One of the parent birds will eventually return, feed the chick, and eventually draw it away from the area. Four chicks moving in four directions with two parents make for busy periods so the return may take some time.

Most of the encounters of stray chicks are just that. They have left the nest recently and are learning to fly, hunt their own food and become independent with the parent bird’s help.

You can sometimes hear the alarm calls of the parents if you approach too close to the young.

You may even hear an alarm call from a parent further away, dealing with another offspring situation. Cats, those notorious hunters, should remain indoors if there are young birds around.


Chris Blomme is an executive member of the Sudbury Ornithological Society and works with animals at Laurentian University. Have a question for Chris? Send it to editor@northernlife.ca.

The Birdman: This has been a great winter for spotting snowy owls
Feb 27, 2018 3:04 PM
Comments
We welcome your feedback and encourage you to share your thoughts. We ask that you be respectful of others and their points of view, refrain from personal attacks and stay on topic. To learn about our commenting policies and how we moderate, please read our Community Guidelines.