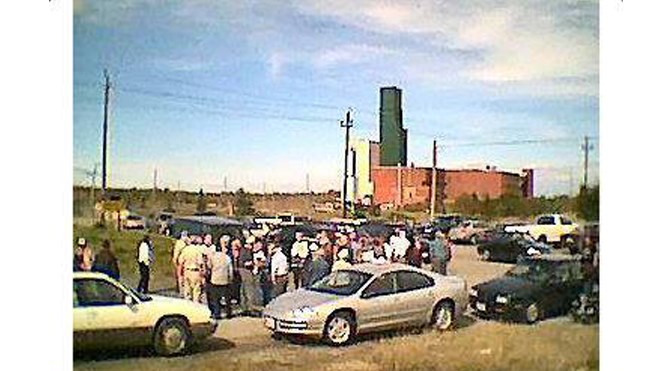 Former Creightonites gather for a reunion in this undated photo. (Supplied)

People often ask me why I am so attached to the Town of Creighton when I was not born there.

It’s true. I was not even born in Canada. But when our family arrived in Creighton in 1952, living on an abandoned farm two miles behind the town in fact, Creightonites received us with open arms and hearts.

It began with Miss Ursula Black, principal of Creighton Mine Public School. When Dad took us to register at the school, she could not have been kinder to my father, me, Ron and Willy. She placed me in Grade 5 with Mr. Keith MacNaughton, Ron in Grade 4 with Mrs. Rita Craigen and Willy with Miss Ann McClelland in Grade 2.  All of the teachers assisted us in every way possible. This was important because we spoke only rudimentary English as we had been in Canada less than a year. The children on the playground included us in their games from the first day. How we appreciated that.

Father Emmett Regan made us most welcome at St. Michael’s Catholic Church. Accompanied by his dog, he often walked to visit my mother during the week for tea. She was at home alone with my little brother, Franky, and our baby sister, Marianne, who had Down’s Syndrome. Mom loved his visits. His big Irish smile always perked up her day.

Sometimes parishioners invited us for breakfast after Sunday Mass, all six of us. I remember Mrs. Eileen Massey hosted us several times. Often, Mrs. Reid invited my two brothers and me for a hot lunch — usually tomato soup and grilled cheese sandwiches. The first time I tasted pumpkin pie was at the home of our choir director, Mrs. Della Drennan. It was so good, and I’ve loved it ever since.

Father Moore brought the statue of Our Lady of Fatima to Creighton Mine in May of 1953. He travelled all over the world with this statue. Parishioners and choir gathered around it on the church lawn, prayed and sang hymns to Mary. After we had returned to our home in the bush, we noticed Father Regan and Father

Moore approaching the house. When our parish priest had told Father Moore about our family and our ill baby, he wanted to come to visit us. He was carrying the rosary from the statue and placed it in Marianne’s bassinet and we all prayed around her little bed. Then he took the tiny blue medal from his watch band and pinned it to the baby’s nightie. He told us that in 10 days we would see a change in the baby’s condition. We did. Marianne died on the 10th day. Dad carried her little body to Wavell Street, where Mr. Doug Brown happened to be sitting outside. When he ascertained that my father had carried his dead baby for two miles, he immediately offered him transportation to Lougheed’s Funeral Home on Eyre Street in Sudbury.

In 1960, when my brother Willy, 15 years old, was killed in a car accident, the support of Creightonites was overwhelming. So much food was brought to our home that it was impossible to consume it all. Miss Black came to visit us on several occasions, as did Father Regan numerous times. St. Michael’s was packed for the funeral Mass. Many Creightonites had come to the funeral home, as well.

The Ladies’ Auxiliary of the church organized a huge baby shower for Mom and our new baby, Lillian, who was born just six weeks after my brother’s accident. My mother had been invited to become a member, which she did. Creightonites included us in every aspect of the life of the town.

My teaching career began at Creighton Mine Public School in 1962, the school I had attended as a child. That was a special thrill for me. I was living at the Teachers’ Residence on Snider Street with most of the staff which facilitated us becoming well acquainted and indeed becoming friends — friendships which have lasted until today.

When Alex and I got married on Dec. 28, 1963, it was the Ladies Auxiliary who catered our wedding dinner in Cabrini Hall located beside the church, even though it was during the busy season between Christmas and New Year’s. Creighton well-wishers gave us many lovely gifts. We moved into an apartment on George Street across the street from the school, most convenient for me. Our eldest daughter was born while we resided there. We then moved to Wavell Street, where the neighbours were like family. Everyone looked out for all the children.

Our second daughter was born during the years we lived there. The neighbours couldn’t wait to meet the new baby and brought presents for her. Bringing two babies into our homes in Creighton Mine definitely made the town feel like our home town.

Dad worked underground at the mine in Creighton, which is why our family had moved to the little town. Colleagues explained safety factors to him as working deep underground was a totally new experience for this man, who had been born and raised on a farm in Holland. He had never envisioned working in a mine, but he needed money to support his family in this new country.

Unfortunately, the Town of Creighton no longer exists due to the mining company’s plans to divest itself of residential real estate, but in 1989 the first exhilarating Creighton Reunion was held. The excitement was palpable everywhere on the town site. Creightonites came in droves from many places in Canada and the United States. Since then, Creighton Reunions have been held every year on the third Sunday of September, with this year being the 28th annual Creighton Reunion. Giving back a little, I advertise the annual reunions every year with posters, flyers and on social media inviting anyone who ever lived in Creighton to come once again to reconnect with former neighbours and friends.

The physical Town of Creighton is gone, but the spirit of Creighton lives on in our memories. My home town will always be Creighton because of the warm welcoming people of Creighton Mine.