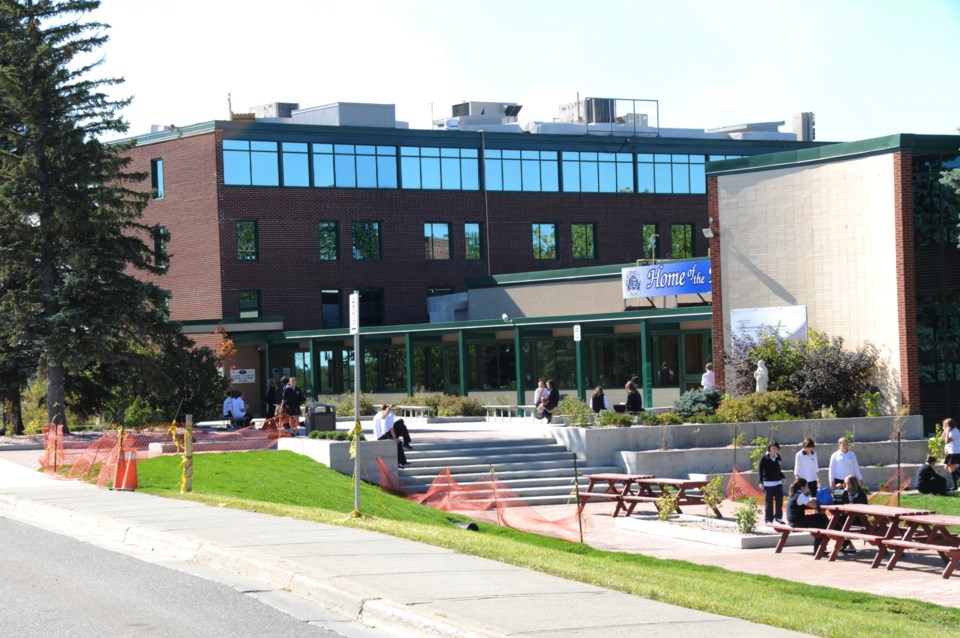 After I graduated from Grade 8 at Lively Public School at the age of 15, it was time to choose a high school.

I had heard of this new school for Catholic girls called Marymount College in Sudbury. I knew that buses would take me there, as well as boys to St. Charles College. I was excited to begin my new educational experience. I had no idea of what an adventure it would turn out to be! It was September of 1956.

When the bus arrived at the school, we discovered that the school’s construction had not yet been completed. We were directed where to go and began our climb to the top storey of what later became the Convent of the Sisters of St. Joseph.

We were the very first Marymount students. Because of this, only Grade 9 was offered. There were three classes of 30 students in each class. Sisters of St. Joseph taught us. I remember that Sister Estelle was principal, Sister Alicia taught science and math, and there was one other teacher who I believe was Miss McDonald. My memory may be erroneous on this point as it was, after all, more than 60 years ago.

We wore uniforms very different from the uniforms worn later. I had a grey jumper, white blouse with a little blue ribbon in the top button, a cobalt-blue blazer and sturdy black oxford laced shoes with clear nylons. Silver and blue were the school’s colours in those early days. I was proud of that uniform, the first uniform I ever wore.

Since there were only 90 students, we became acquainted with each other very quickly. Going up these long stairs was not something any of us had anticipated upon entering high school. Once we entered our classrooms, we noticed immediately that the construction of these rooms had not been accomplished either.

As a result, electricians on ladders were working above our heads. It happened that I knew one of these electrical workers as he was Dutch, as I was. (The Dutch community was very small in the Sudbury area at the time.)  He would smile at me at times, which was a distraction I must admit. Plumbers were doing their work outside the classrooms. We encountered tradesmen of all kinds trying to finish their assigned jobs everywhere.

Thirty desks had been set up in each room, as well as a teacher’s desk and some blackboards. The instruction by the teachers under these extreme conditions was nevertheless excellent. We learned a school song, as well as the motto, “Disce ut Vivas,” which meant “Learn to Live” appropriately. I still remember bits of the school song which went, “Disce ut Vivas let us sing; to Alma Mater honour bring. We promise loyalty to you, beneath the silver and the blue.”

I don’t know whether that still is the Marymount school song or even the motto, but those words have stuck in my mind all these years, so they were meaningful to me obviously.