Working from home, the new old

LU history prof emeritus says maybe the pandemic will allow us to rediscover the joys of everything from baking to sewing
Apr 13, 2020 2:45 PM By: Community Submission 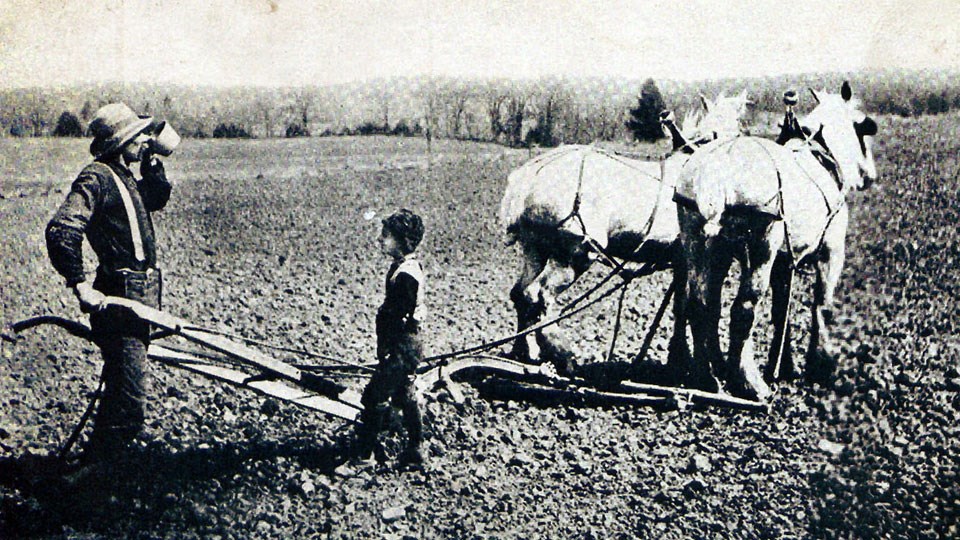 We found this photo entitled "ploughing in Northern Ontario" in our database of historic photos from the area. (Supplied)

If we take a long time frame, even in a very simplified historical account as the following, we can see that working from home is a return to a previous era, as opposed to something fully new.

Before the development of factories and intensive urbanization in the 19th century (1800-1900), working from home was the norm.

Until then, all countries were predominantly rural. Farm work was, until the mid-19th century development of reaping and threshing machines, a family and single household affair. It was also labour intensive, and extended families worked the fields within walking distance from their homes.

Working in factories and in big clusters in cities was a novelty of the modern era.
It started in England in the late 18th century and eventually spread everywhere.

The steam engine plus spinning and weaving machines enabled factory work which eventually became the norm for many workers. To illustrate with a country often associated with industrialization and large factories: until the 1860s, two thirds of Germans lived on farms working from home, but by 1913, two thirds lived in towns or cities with nearly half of those working in factories.

Simultaneously with the English industrial revolution a demographic shift occurred in all of western Europe. Population expanded due to medical improvements, such as vaccinations. Mortality rates were also lowered by nutritious foodstuffs, such as potatoes from the so-called new world. These changes, combined with dividing up or expropriating of common lands, drove many people into towns and cities. The demographic and industrial revolutions supplied the labour for the factories, hence many no longer worked at home.

Until industrialization, most consumer goods were handmade. Artisans with an intricate system of training and quality control made almost everything from shoes, to shirts and pants, to spoons, plates and tables. This work was done in little shops where apprentices and journeymen lived in the master’s household.

Cities were relatively small and served mainly to finance trade and exchange goods. A place like the German city state of Bremen (that I have studied) with a population of about 30,000 in the 1820s had 80 bread bakeries, 12 specialty bakeries, 68 butchering and slaughtering shops, 25 beer breweries, 65 distilleries, 146 shoemakers shops, 180 tailoring places, even 21 button maker shops and 27 chair makers, to list only some of the mainly one-family, at home workshops.

Some of these home-based production sites were run by women. All these craftspeople usually worked from shops above which they lived.

After the introduction of stitching and riveting machines with factory production, shoe and boot makers declined. Cutting and sewing machines did the same to tailoring.

Before kneading machines displaced bakers, artisanal bakeries existed on nearly every third or fourth block. By the early 20th century, Bremen’s guilds and artisan organizations were being displaced by small and large factories making beer and bread, while clothes and furniture came from factories in other towns.

Another aspect of making goods in the pre-industrial era involved the so-called domestic or putting-out system. Before factories, suppliers went from shop to shop, from household to household, bringing the raw materials such as wool or linen or leather or wood and collecting finished products.

For example, socks or cloth were made on looms with only a few labourers working together in a work room in one household where they lived. Often these rural people worked part time on making goods that others transported to market. Many luxury goods, like fancy gloves and lace, were made this way by women in addition to doing their farm and household chores.

Before industrialization, except for sailors, soldiers, merchants or a few financiers and some intellectuals, ninety percent of the population worked from home. One could point way back and note that the Romans had neither military helmet or insignia factories nor cart-making industries. Those were produced in little shops next to the home of the craftsmen/women.

As service industries in the 20th replaced the agricultural or industrial sector of the economy in terms of where most people were employed, a slow shift towards working from home meant going back to a previous approach of working where one lived.

Technological change has slowly reinforced that trend as machines make cars and robots mine minerals. The increase in the self-employed and consultants meant many could and did work from home, thanks to the personal computer which only made that possible in the last three decades.

So before this virus forced us to stay at/work from home, the trend away from working in big clusters was already underway.

Indeed, in places like Bangladesh where Nike has its horrid factories, in fact many children also work at home in what could be seen as a new form of the putting-out system.

Perhaps this virus will influence our supply chain such that individuals will start to take more responsibility for their daily needs. While working at home we could rediscover the joys of growing food, making baked goods, sewing clothes, doing more culturally creative activities or walking in our beautiful countryside to help reduce the global trade of goods and thus the spread of pests/diseases, not to mention reduce carbon emissions and waste.

We created the problem … it’s up to us to solve it. Previous generations had some good things going, even if not by design.

Dr. Dieter K. Buse is Professor Emeritus, History, Laurentian University. He has published many studies on modern European history and more recently on our region, including Come on Over: Northeastern Ontario (co-authored with Graeme S. Mount) and the two volume work, Untold: Northeastern Ontario’s Military Past vol. 1: 1662-World War I and vol. 2: World War II-Peacekeeping (available from Latitude 46, Sudbury).

Who died at Burwash? When the 1918 flu epidemic collided with Canada’s ‘enemy aliens’ policy
Jul 6, 2020 6:00 PM
Comments
We welcome your feedback and encourage you to share your thoughts. We ask that you be respectful of others and their points of view, refrain from personal attacks and stay on topic. To learn about our commenting policies and how we moderate, please read our Community Guidelines.