A near-capacity crowd filled Glad Tidings Church on Nov. 28 to hear a selection of holiday classics and music often associated with the Christmas season.
Dec 7, 2015 7:00 PM By: Hugh Kruzel for NorthernLife.ca 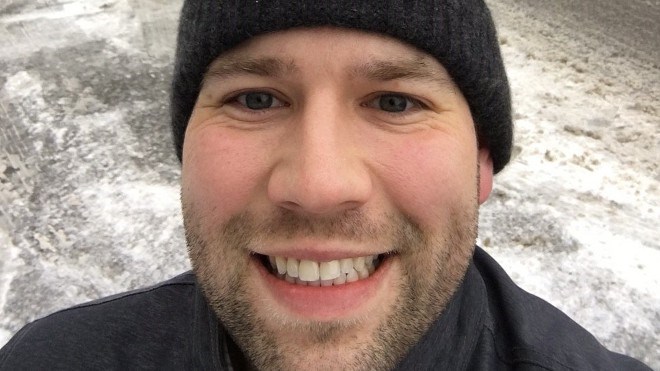 Kevin Zakresky, who guest-conducted the Sudbury Symphony Orchestra on Nov. 28, shot a selfie in a toque to prove he’s ready to take on a Northern Ontario winter. Too bad Mother Nature hasn’t delivered one yet. Photo supplied
A near-capacity crowd filled Glad Tidings Church on Nov. 28 to hear a selection of holiday classics and music often associated with the Christmas season.

As in previous years, the audience was encouraged to sing along with the entire stage of performers during the last four selections and encore.

“I really got into the spirit,” was a remark repeated throughout the crowd as the extended applause finally faded. That afternoon, a special matinee was also offered to a youngsters and families. They were the first to experience the zestful leadership of guest conductor Kevin Zakresky.

“He really seems to connect with the audience,” said Albert Sieve, who took in the presentation from Row D. “He had us along for the ride right from the first minute.”

Indeed, Zakresky’s expressive nature and buoyant gestures – on the tip of his toes at times – brought out the best from the performers.

With the illusion of the crack of a whip and sleigh bells from the percussion section, the opening selection by Leroy Anderson really set a tone of fun, momentum and energy. Music sacred and secular, instrumental and vocal, English and French, were all part of the program.

Instead of telling everyone to turn off their electronic devices — a common refrain at live stage arts presentations — Zakresky encouraged people to bring out their phones and take selfies.

“We like to be Liked,” he said, suggesting everyone post the image on Facebook. In the middle of one piece, he gently put down his baton and took out his own cellphone to shoot a selfie himself, something the audience really seemed to enjoy.

“I like his presence and social media savvy,” said Dave Petryna, the past president of the SSO board. “The SSO and all cultural outlets need the 21st century tools and techniques to move forward. Classical music is not just for those with life experiences — we need to see an audience that represents the total population of Sudbury.”

Zakresky is a graduate of Yale University and the University of British Columbia. Since 2013, he has taught voice and music repertoire at the Vancouver Symphony Orchestra School of Music, and publishes regularly in choral and vocal periodicals.

Naturally the signature passages from Tchaikovsky’s “Nutcracker Suite” are a holiday concert staple, but visiting tenor Owen McCausland plucked heartstrings with his rendition of “Oh Holy Night.” When more than 60 members of the Bel Canto Chorus filed onto the stage, the audience knew Handel’s “Messiah” would get the full treatment of richness, depth and volume.

“The Hallelujah Chorus is more than a holiday classic, it is such an amazing part of the suite of traditional music for orchestras and listeners. It stirs your spirit,” music therapist Kylie Klym told me.

In case you were wondering, Zakresky is not one of the candidates in the competition to fill the shoes of outgoing conductor Victor Sawa. To explain, in the new year, three professional conductors, whittled down after a cross-country search, will each perform and have their potential evaluated. The last conductor standing becomes the new conductor of the SSO.

“The audience will also have an opportunity to be engaged in the selection process if they attend all three concerts,” said Jennifer McGillivray, executive director of the SSO.

Hugh Kruzel is a freelance writer, Sudbury Symphony supporter and chair of the Sudbury chapter of CARP.

Greater Sudbury enters ‘Stage 3’ today, but we can’t let our guard down
Jul 17, 2020 1:00 PM
Comments
We welcome your feedback and encourage you to share your thoughts. We ask that you be respectful of others and their points of view, refrain from personal attacks and stay on topic. To learn about our commenting policies and how we moderate, please read our Community Guidelines.