But it turns out satisfying those concerns only led to new complaints.
Jul 21, 2014 6:21 PM By: Darren MacDonald 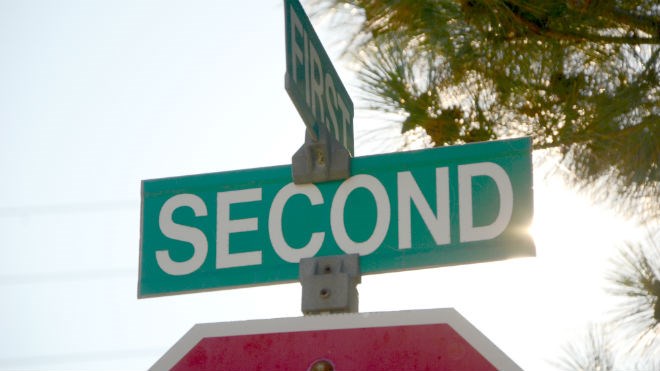 second ave sign
But it turns out satisfying those concerns only led to new complaints. And just by writing letters of concern to the Ministry of Environment, Minnow Lake Community Action Network members John Lindsay and Dot Klein managed to halt the project for this year. What's going on here?

Second Avenue was to be the city's biggest road and sewer rebuilding project for 2014, adding a centre turning lane and sidewalks from Donna Drive to First Avenue and a traffic light at the Scarlett Road intersection, where the road would expand to five lanes. The entrance to the Civic Cemetery and the nearby dog park would be realigned, and drivers could turn onto the strip mall and the other residential streets along Second without holding up traffic.

Anyone who takes Second Avenue knows that at rush hour, it's bumper-to-bumper of single lane, frustrating traffic. The improvements aim to smooth traffic flow, reducing idling emissions — and frustration — among drivers.

A public meeting in March prompted the city to move up a plan to replace ditches with a more formal drainage system, allowing for paved shoulders and bike lanes from Bancroft to Donna Drive, connecting riders to the big box stores in the area.

Never mind this was the same John Lindsay who, in 2012, opposed a roundabout (horrible for pedestrians, he said) as part of the nearby Silver Hills development. In fact, Lindsay has been a regular at planning committee over the years, fighting developments in Minnow Lake, ranging from the massive Silver Hills development, to a small plan to add four units to a four-unit apartment building. The latter decision he took to the Ontario Municipal Board and lost.

His stance on Second Avenue — that the five-lane intersection isn't needed — is all the more confusing considering how many times he has gone to planning to argue against development in Minnow Lake because roads in the neighbourhood can't handle the increased traffic. Yet here, he's fighting a project to address that concern.

With developers eyeing Minnow Lake for future subdivisions, the city must ensure the roads can handle the increased traffic.

Packing more development into a smaller area is part of the city's intensification policy. Not only is it good planning, and cheaper for taxpayers, the policy is good for the environment. People living closer together means more undeveloped wilderness areas outside urban zones, reduced commute times, easier public transit and ultimately lower carbon emissions.

That's not an easy pill to swallow for many of us who have grown up in our spread out city. The angry voices at planning committee meetings have gotten louder over the years. “I'm not opposed to development, but there's plenty of other areas in this city where you can build” is a familiar refrain.

In the case of Second Avenue, however, the CAN has taken advantage of the public consultation process to delay a project that would have benefited Minnow Lake. As Marge Simpson once said, one person can make a difference. But sometimes, they probably shouldn't.