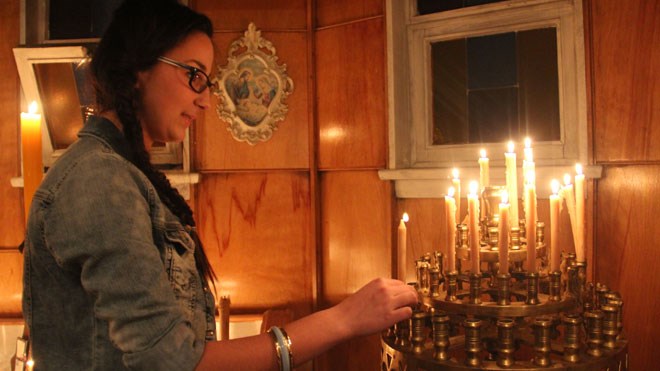 The first was Dec. 24 at St. John the Divine Anglican Church in Copper Cliff.

I grew up in the church, so the service featured familiar traditions, including singing Christmas carols, listening to the Christmas story and shaking the peace with people I've known all my life.

My second Christmas Eve was Jan. 6, thanks to Father Jovan (John) Marjanac of Sts. Peter and Paul Serbian Orthodox Church, who invited the media to take in the service.

The church also opened its doors to others who celebrate Christmas in January instead of December, including the city's Ukrainian and Coptic Christian communities, as well as anybody interested in attending.

It was a chance to experience another of the rich mosaic of cultures that make up Greater Sudbury, as boasted by the flags on the Bridge of Nations.

As someone whose totality of knowledge of Orthodox traditions includes the movie “My Big Fat Greek Wedding” and attending a university friend's Romanian wedding, the traditions practised in the Serbian Orthodox faith seemed novel.

I must add, though, when the service strayed into English, I did recognize parts of the liturgy. Unlike most Christian churches, the choir sings a capella in four-part harmony, without the aid of an organ or other musical instruments.

There are no pews in the sanctuary, so most people stand — men on one side, women on the other (I have to admit I didn't notice this arrangement, and accidentally situated myself with the men). “We're not too strict,” Father John later assured me.

The faithful lit candles throughout the service.

Most delightful was the badnyak, an oak tree decorated with crepe paper, candies and oranges that's the Serbian Orthodox version of the Christmas tree.

After Father John blessed the tree, it became something of a free-for-all, with parishioners rushing to break off branches to bring home, seeing them as a blessing for the year to come.

Because the oak tree doesn't lose its leaves in winter, it's a symbol of the endurance of the Serbian Orthodox faith.

Sts. Peter and Paul parishioner Zandra Zubac, like me, said Christmas Eve service is a special time evoking childhood memories. “My father was Serbian Orthodox, so when I come here and celebrate with the Serbian community in Sudbury, I'm really enjoying myself, because it brings me to my roots,” she said.

Zubac has a poignant tradition with her badnyak branch.

“My father passed away 21 years ago, so I'll be taking my piece of the badnyak and a little bit of the ribbon, a walnut, an orange, candy, and I'll bring it to the cemetery to place on his grave,” she said.

The evening ended with a fish dinner in the church's basement, the traditional meal on Christmas Eve, before the feasting on Christmas Day (Serbians are especially fond of roast pork, I'm told).

After enjoying this delicious meal, I walked out of the church into a cold, snowy Sudbury winter evening. It was Christmas Eve again. I sang quietly to myself ... “Silent Night, Holy Night.”

Heidi Ulrichsen has been a reporter with NorthernLife.ca for 10 years, currently covering the lifestyle and education beats.