I step out of the cold February night into the warmth of David Wood and Diane McLean's spacious Sudbury home. There's a hubbub of voices coming from groups of people standing around a snack table, sipping wine. A cat winds around their feet.
Feb 17, 2015 8:41 PM By: Heidi Ulrichsen 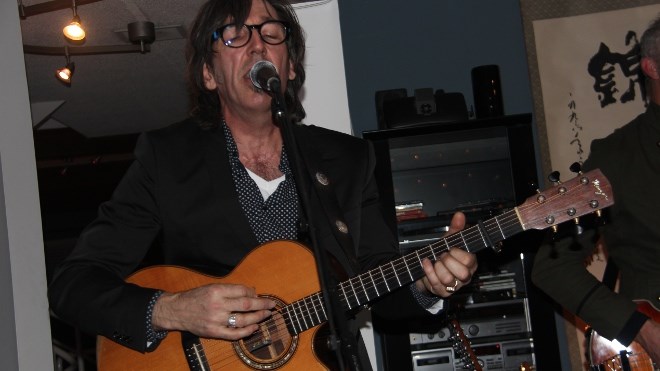 Stephen Fearing performs at a Sudbury house concert. Photo by Heidi Ulrichsen.
I step out of the cold February night into the warmth of David Wood and Diane McLean's spacious Sudbury home.

There's a hubbub of voices coming from groups of people standing around a snack table, sipping wine. A cat winds around their feet.

It's not the typical scene associated with a musical performance, but that's just what it was. This past weekend, I was invited to take in one of the lesser-known aspects of Sudbury's music scene — a house concert.

The concert in question, featuring the folk music duo Fearing and White — they're currently on tour with their second album, Tea and Confidences — was organized by Scott Merrifield.

The former Northern Lights Festival artistic director has been putting on the house concert series for a quarter-century, with about six to eight concerts held each year.

He said people love the up-close-and-personal nature of house concerts. “I just get a kick out of bringing audiences and performers together for a great entertainment,” Merrifield said.

House concerts are becoming more popular in the city, Merrifield added, and there's a handful of other Sudburians who also organize house concert series.

On this evening, about 70 people — most wearing house slippers — are crammed into Wood and McLean's living room, sitting on an assortment of couches and chairs brought in for the occasion.

In lieu of selling tickets, Merrifield passes around a hat, and people make donations to the musicians. Audience members chat and joke with musicians Stephen Fearing and Andy White in between sets.

Before Fearing and White took to the stage, I chatted with Olga Brinkman, who's a regular at these shindigs.

“It's a great venue that Sudbury doesn't really know about,” Brinkman said. “It's kind of like a hidden gem. To be that close to the musicians in an intimate setting like this is fabulous. That's Sudbury for you.”

For his part, Wood said he loves hosting house concerts. Arts patrons who also regularly board Sudbury Theatre Centre actors, he and his wife have likely had a dozen concerts at their home over the last decade.

Although Wood admits hosting a house concert is “quite a disruption” — it takes them a weekend to set up and clean up afterwards — it's worth it. “It's always a great evening,” he said.

Not only do they provide a venue for the house concert, they also get to know the musicians, as they stay with them overnight.

White told me he loves playing house concerts not only because he gets to stay in swanky homes with wonderful hosts, but also because the audiences are so appreciative.

“I think the people who come to it feel closer to the artists because you're literally having a cup of tea or a glass of wine with them, and you're just mingling together,” he said.

Heidi Ulrichsen has been a reporter with NorthernLife.ca for 10 years, currently covering the lifestyle and education beats.