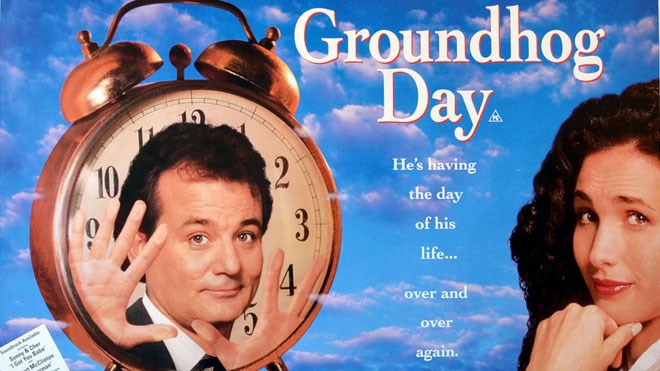 Since purchasing the 1993 movie "Groundhog Day" on DVD, it has become tradition for Northern Life reporter Heidi Ulrichsen to watch it every year on Feb. 2.
I have a bit of an admittedly-quirky tradition for Groundhog Day.

No, I don't stick a groundhog out the back door of my apartment building to find out whether or not it can see its shadow, and thus if the approach of spring is imminent (fat chance), although I do have two spoiled guinea pigs who might stand in.

Rather, since purchasing the 1993 movie Groundhog Day on DVD, I've watched it every year on Feb. 2.

He finds himself in a time loop, living Feb. 2 over and over. Director Harold Ramis estimates 30 or 40 years pass before the time loop finally ends.

After indulging in bad behaviour and numerous suicide attempts, Connors reexamines his life and priorities.

Eventually, Phil is able to befriend almost everyone he meets during the day, using his experiences to save lives, help townspeople, and even win the heart of his producer, Rita (played by Andie MacDowell).

Watching Groundhog Day each year on Feb. 2 has a certain symmetry with the point of the movie, don't you think?

Besides, as someone who has been in the news business in Sudbury for nearly a decade now, I know very well how Phil feels when sent out to cover the same event yet again.

But just as Phil comes to realize, you can't do exactly as you please each day. You just need to find the beauty in those commonplace moments. That beauty usually comes from the people you interact with.

The lyrics from the song Ordinary Day by the band Great Big Sea sum up this sentiment: “And I say way-hey-hey, it's just an ordinary day, and it's all your state of mind.”

Phil's statement that Groundhog Day is “long, and cold, and it's going to last the rest of your life” might have some resonance with the Sudburians I've heard grumbling lately about the cold, snowy winter we've been having.

Perhaps people would enjoy themselves a bit more if they got out and took part in the numerous winter activities this community has to offer — downhill and cross-country skiing, skating and snowshoeing.

Maybe you could even build a snowman and get into a snowball fight with some kids, as Phil does in the movie with his would-be girlfriend.

Embrace the winter. Enjoy the little things in life. Regardless of the groundhog's prediction this Feb. 2, spring will be upon us again eventually.