People often ask me what continues to motivate me to advocate for the orphaned children of Kenya. In early August, I was reminded how lucky the children at Zawadi la Tumaini Children’s Home are to have our home — and each other.
0
Dec 28, 2014 4:56 PM By: Jacqueline Villeneuve - Adventures in Hope 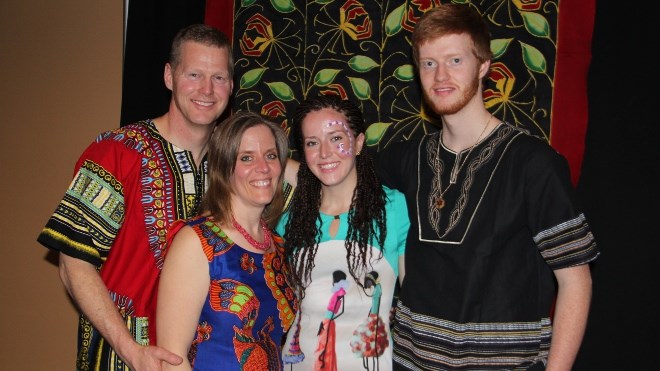 Jacqueline Villeneuve, second from right, is seen with her family in February, 2014. She said many people have contributed to her cause. File photo.

People often ask me what continues to motivate me to advocate for the orphaned children of Kenya.

In early August, I was reminded how lucky the children at Zawadi la Tumaini Children’s Home are to have our home — and each other.

I was travelling to our new location for a home inspection. Victor, a Kenyan board of trustees member, was driving. It was a cold morning, roughly five degrees.

The streets were bustling and everyone was bundled up and heading to work. Victor and I chose to drive through Mathare Slum, which is similar to Soweto Slum, where the majority of our children were born and raised prior to coming to Zawadi la Tumaini.

As we were passing through in the slow 7 a.m. traffic, I saw a small bundle on the sidewalk to my left. As people walked by the bundle, I saw them quickly rush past, some stopping for just a moment before turning away. My heart sank.

Victor also spotted the bundle. He turned away, too, and recommended I do the same. I knew immediately my suspicions were true. It was an abandoned baby.

Victor reminded me that we were in a rush and that someone else would help the baby. I couldn’t stand to leave the child and told him to pull over.

As our car pulled to the side, a nurse that I recognized from Aga Khan Hospital was doing the same. She was on her way to work, but stopped to see if the child was OK.

Together, we approached the baby in the bundle. I tried to steel myself for the worst, praying the baby was alive.

There she — yes, a girl — lay, wrapped in a thin red towel. I could tell she had been born just hours earlier. Her eyes were closed, her skin discoloured. She wasn't alive.

I leaned down. I didn't want to leave her on the sidewalk. I wanted to take her away from the busy road, away from the street dogs and people who had chosen to walk past her without a second glance.

The nurse stopped me. She explained that some fluids might still be left on her body and she may be HIV positive. A man standing near by told us a someone had gone to get a police officer 10 minutes before we arrived. He assured us they would be bringing the baby’s body to the morgue.

I couldn’t turn away. She looked so peaceful, but we couldn’t save her.

They each have their own story of heartbreak and success.

Khadija came to our home at 10 years old. She had just lost her mother to AIDS and was left in the care of an aunt, who was also suffering from the disease and who passed on shortly after bringing Khadija to us.

She was a kind and gentle woman who loved Khadija more than anything and treated her as her own child. Khadija inherited her aunt’s kind heart. She has always been a supportive member of our family. She was especially helpful when our home expanded last December from 10 children to 23.

Khadija gave the children home tours, helped them select their shoes and clothing and introduced them to the other children. She remained by their side for the first three weeks in our home. She's a true believer in education, even at 11 years old, and is always setting new challenges for herself academically.

Khadija loves to practise her reading in English, which she delivers out loud, in a very animated fashion. In particular, she enjoys the books of Robert Munsch and even does all the voices, just like he does.

By the time Khadija came to live with our family at Zawadi la Tumaini, she had sacrificed her education to take care of her mother. She nursed her and had watched her die. Taken in by the only living family member who truly cared about her, Khadija lost her, as well.

Her story could have ended as tragically as the baby on the side of the road. Instead, her story will have a different ending. Each one of our children has a similar story to tell.

When people hear about the conditions that brought our children to us, they feel sympathy, of course. That is reality.

However, ours is not a story of tragedy. I also love to share the positive stories of the present and the future that these children are being offered. I want to share their triumphs and their victories.