This is Faith: She and her new family need your help

There is nothing greater than a parent’s love for their child. As a parent, you will do anything to support your child. You are there through the good times and the bad. Through sickness and in health.
0
Dec 21, 2015 5:44 PM By: Jacqueline Villeneuve - Adventures in Hope 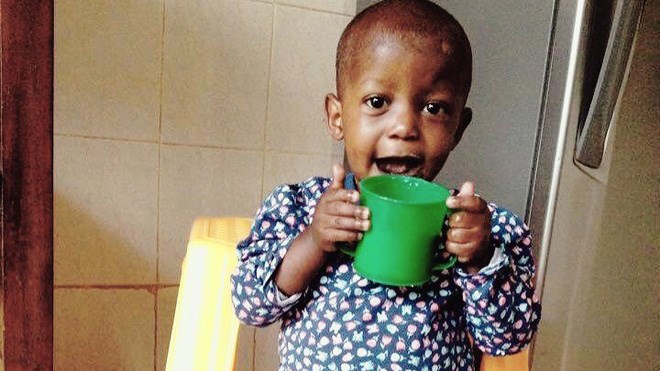 The smile on Faith’s tiny face speaks volumes about how her life has improved since going to live at the Zawadi la Tumaini - Gift of Hope Children's Home in Kenya. The home was founded and is operated by Jacqueline Villeneuve, originally of Hanmer. Photo supplied
There is nothing greater than a parent’s love for their child.

As a parent, you will do anything to support your child. You are there through the good times and the bad. Through sickness and in health. You are patient through every tantrum; you support through the difficult teenage years, and; you never give up on the children who desperately need your support.

Two months ago we were reminded of this when we rescued a young girl named Faith.

The holidays have always been very important to our family at Zawadi la Tumaini. Most of our children had never experienced the joy of the holidays until coming to our home. This year will be very special for our family. In November, we rescued four-year-old Faith.

Our social worker heard Faith’s story from concerned neighbors, who witnessed her abuse on a daily basis since she was an infant. At three months old, Faith was left in the care of her aunt after her mother’s passing. Her father left immediately after her mother’s death.

Faith’s aunt had six children of her own (she’s currently pregnant with the seventh). When our social worker visited the home, she found Faith in a dirty sweatshirt.

She said Faith appeared to have gone weeks without bathing. The little girl had a black eye, a cut on the back of her head and bruising around her neck. She saw Faith’s frail body, her protruding stomach. She knew immediately the neighbor’s stories must be true.

When we went to see Faith, I stayed in the car. Faith’s aunt was refusing to let Faith go, claiming the girl “fell down the stairs.”

There were no stairs for Faith to fall down. She lived in the slums in a home with tin walls. While her aunt’s children ran free, playing, going to school and getting 3 meals a day, Faith was locked away alone. She didn’t know the difference — this was the only life she knew.

When Jerusha returned to our car, she told me Faith surely could not be four years old. Jerusha compared her to the size of my daughter, who turned one in early December. Since Faith’s aunt denied us taking her into our care, we went to the authorities.

We returned the next morning with the police. Thirty minutes later, we were in the car with our sweet Faith. Jerusha was right: She was tiny. She was also quiet, wearing the same dirty sweater and no pants. Her first night in our home, she cried for hours. She was in pain. Because of the heavy rains overnight caused by the El Nino, the road to our home is impassable (we have to walk half a kilometre to the tarmac) we had to wait until morning to rush Faith to the hospital.

When we got to the pediatric emergency wing, our doctor brought in all the doctors on staff to assist with Faith’s initial assessment. As the physical exam continued, it was clear how badly she had been abused. Everyone — us, nurses, doctors — held back tears. Two doctors were so overcome they had to step away.

The doctors told us the deep wound on the back of Faith’s head meant she was probably struck with a heavy object. There was an abscess on her head that required immediate surgery. After she was admitted, doctors looked for any fractures, examined her stomach and created a plan to combat her extreme malnutrition. When they listened to Faith’s heart, they found a heart murmur.

As the examination of Faith’s tiny, little body continued, we were told to prepare for the worst. Her hands and feet were swollen and purple. A cardiologist was brought in, who explained that Faith had Tetralogy of Fallot, a congenital heart defect normally caught at birth

It is treatable with open-heart surgery, but because Faith weighs only 17 pounds at four years old, she likely wouldn’t survive surgery. The condition leaves Faith in constant pain — a pain she has lived with every day since her birth — but she will need to wait at least six month before she’s strong enough for the operation.

Jerusha and I turned to each other. We were experiencing a parent’s worst nightmare – knowing your child was in immense pain and not being able to help in any way. We stayed in the hospital for three days. At this time, we began a small crowd funding campaign. I appealed to supporters on our Facebook page and throughout my networks.

I was blown away by the support we received. In fewer than two weeks, we raised $5,000 for Faith’s initial medical bills.

Donors from across Canada and Europe heard Faith’s story and joined together to help her. This will be Faith’s first Christmas with her new family. Since moving to Zawadi la Tumaini, she’s gained four pounds. She is talking more and more every day. She smiles and laughs, dances and plays with her brothers and sisters.

She formed a lovely bond with Jerusha and thinks of her as her own mother. She goes everywhere with her. There’s much to be hopeful for, but Faith’s condition leaves us with a lot of uncertainty.

It is a miracle she has lived this long with her malnutrition and untreated heart defect. Everyone here wants to give Faith an amazing first Christmas.

Many children’s homes would have turned away after finding out the severity of Faith’s condition. Jerusha and I have promised to stick by our children through thick and thin. There was no question in our mind that we would make Faith a member of our family.

On Feb. 20, 2016, Zawadi la Tumaini hosts our fourth annual A Night in Africa Gala fundraiser at Cambrian College. It’s the largest fundraiser of the year for Zawadi la Tumaini – Gift of Hope Children's Home. and will feature the flavours, rhythms and culture of Africa.

Besides the flavours, rhythms and cultures of Africa, the gala includes live African entertainment, a silent auction featuring authentic African items, a message from the founder of Zawadi la Tumaini, and a menu inspired by food from across the African continent.

A portion of the proceeds raised at the A Night in Africa Gala will directly support Faith’s Tetralogy of Fallot surgery and recovery.

Purchasing a ticket is a gift of hope. It’s a gift that means a child who has only known fear, abandonment, severe abuse, hunger and hardship in their young life, can believe in the possibility of a bright future – one that includes proper nutrition, an education, healthcare and unconditional love.

Tickets can be purchased online by visiting ANightInAfricaGala2016.eventbrite.ca, or by calling 705-923-1182.

Faith’s journey is only beginning. Our family at Zawadi la Tumaini has been standing behind her, supporting her every step of the way. The journey ahead will be difficult, but we remain optimistic. For more information on Faith’s journey, please visit ZLTHope.org or GoFundMe.com/FaithsJourney.

Former Hanmer resident Jacqueline Villeneuve chronicles her efforts running the Zawadi la Tumaini Children's Home, a refuge for orphans in Kenya she started as a teenager.

Column: We're trying to build dreams for Kenya's orphans
Dec 28, 2014 4:56 PM
Comments
We welcome your feedback and encourage you to share your thoughts on this story. We ask that you be respectful of others and their points of view, refrain from personal attacks and stay on topic. To learn about our commenting policies and how we moderate, please read our Community Guidelines.