Discover: How long does Santa need to deliver to Sudbury’s kids? We did the math on the magic of Christmas

How many calories in cookies and milk does Kris Kringle consume on his nightly rounds? How much weight does his sleigh have to carry? Jenny Lamothe gets some help from LU computation sciences student Yingli Song to find the answers
Dec 24, 2019 12:00 PM By: Jenny Lamothe 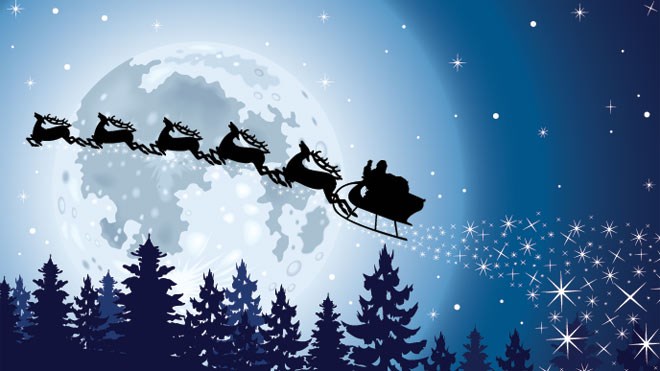 For many children with inquisitive minds, the responses to their questions about Santa’s journey are similar to those given to anyone questioning how Batman is able to overcome any obstacle: ‘Because he’s Santa.’

Second only to this would be a one-word answer: Magic.

But for any parent who has sat through an endless barrage of questions from their little one, trying desperately to answer in a way that makes the child feel heard, but also keeps the spirit alive, there may be hope; your relief may lie in math and science.

That, and many kids will run in the other direction if given those options as answers.

But in case you’re wondering, or you have interested ears in front of you, here’s a handy list of Santa Solutions, brought to you with the expertise of Yingli Song, a graduate student working on her Master’s degree in Computational Sciences at Laurentian University.

First, let’s focus on the numbers we know, even if it’s a rough estimate; and let’s go global, as well as local.

We also know that there is approximately 63,824,448 square kilometres of habitable land on earth.

Now, here’s where it gets a bit tricky. There are a few different ideas about the amount of time Mr. Claus would have to make his trip. Since we’re going global, the idea of ‘one night’ has a fuzzy definition. So let’s go with the idea from Dr. Roger Highfield, former editor of New Scientist and author of the Physics of Christmas: From the Aerodynamics of Reindeer to the Thermodynamics of Turkey.

He posits that while Santa would reasonably have 24 hours to deliver, if he played it smart, he could have almost 48 hours to deliver gifts. If Santa begins his deliveries from the point on the planet where the clocks are the first to strike midnight on Dec. 24, but instead of hovering over a longitude waiting for the Earth's rotation to bring homes to him, he instead travels backward against the direction of Earth's rotation, he adds some much needed time to his Eve.

So if we give Santa a solid 48 hours to make his journey, he’s travelling at an approximate speed of 413 kilometres per second. Here’s what that looks like with more numbers, fewer words:

Of course, at that speed, Song points out a very loud issue.

This is a good place to refer back to either magic, or Batman, as a solid defense.

Now, let’s make those numbers a little more local. According to Statistics Canada’s 2016 population census, there are 25,580 people under the age of 14 in Greater Sudbury – we’re optimistic about the age of true believers. Let us also consider the 3924.48 square kilometres that make up Sudbury – by geography the largest city in Ontario and Canada’s seventh largest city. If we assume Santa has 48 hours to work, we end up here:

Yes, that’s right, 11 seconds to cover the entirety of the city. If you want to break that down even further, we find the number of households in Sudbury: 25,580/2.5= 10,232. By virtue of having only 11 seconds, Santa must make the Nickel City’s children happy by spending .001 seconds at each home.

For context, Song says: “The time of a human blink is 0.3 seconds.”

And just a fun little fact: if Santa did manage to consume one 250 millilitre glass of milk, and one 100 gram butter cookie within his blink of a visit, he would consume approximately 657 calories per household. With 10,232 households, that’s 6,722,424 calories, just in Sudbury. This is definitely one area where Santa is better than Batman.

Of course, in order to achieve speeds like this, Santa has to rely on some pretty spectacular reindeer. While there is some speculation that they are actually female – given that within some species of reindeer males lose their antlers before Christmas – but as there is no indication of the type of reindeer they are, we’ll go with how they are normally portrayed, as males.

Male reindeer have an average size of 160 to 180 kilograms, and have been clocked at between 60-80 kilometres per hour. Let’s assume that Santa’s reindeer would be the best of the best – after all, Donner and Blitzen translates from German as Thunder and Lightning – and go to the high side of these numbers.

Now, let’s figure out what they have to pull. Give every child Santa visits a traditional teddy bear, weighing one half pound for each of the two billion children – we’ve just hit 453,592,370 kilograms.

That’s a heck of a sleigh to pull.

There is a theory from Larry Silverberg, a mechanical and aerospace engineering professor at North Carolina State University, that says the man in red employs a Nanotoymaker, making his sack into an on-site toy factory — with chimney soot, leftover cookies and carbon-based materials activated by high-precision electromagnetic fields transforming into presents on Santa’s sleigh.

We can’t prove it, but again, being that Santa > Batman, you could assume that Santa has an amazing number of cool gadgets.

But back to our known numbers: based on our initial calculations, that of the weight of the teddy bears with what we know of reindeers highest capabilities, it might actually take approximately 2,519,958 reindeers to pull the sleigh.

And that’s without the weight of the sleigh, or the jolly man himself.

So, while the math may not always be plausible within our understanding, it might be easier to say that Santa is a scientist, a mathematician, a lover of cookies and milk, and someone imbued with enough magic to make it all possible.

All of this to leave you with two messages: have a wonderful holiday season, and are Santa and Batman maybe the same person?

Jenny Lamothe is a freelance writer, proof-reader and editor in Greater Sudbury. Contact her through her website, JennyLamothe.com

Discover: So you want to have your DNA sequenced ....
Jun 23, 2020 1:10 PM
Comments
We welcome your feedback and encourage you to share your thoughts. We ask that you be respectful of others and their points of view, refrain from personal attacks and stay on topic. To learn about our commenting policies and how we moderate, please read our Community Guidelines.