Roads are important, but what Ring of Fire really needs is a roadmap 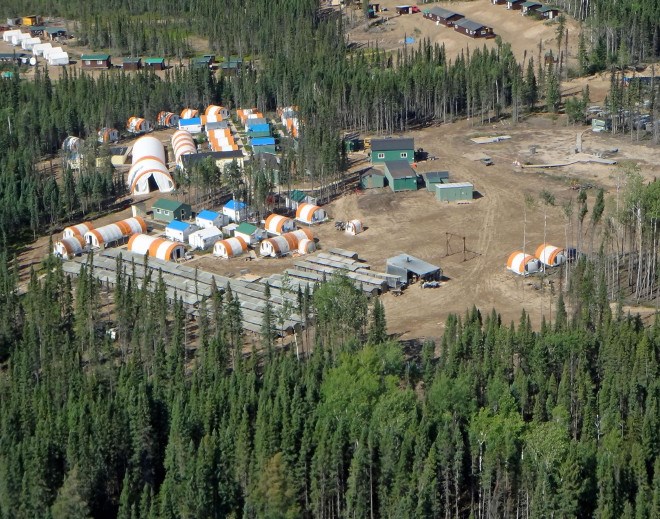 Noront Resources' exploration camp in the Ring of Fire. (Supplied)

It appears Premier Kathleen Wynne followed through this week on a threat she made back in May: If the member communities of the Matawa First Nations couldn’t come up with a consensus on road access to the Ring of Fire, the province would start talks with individual reserves, and negotiate access on a community-by-community basis.

With the chiefs of Webequie First Nation and Marten Falls First Nation on hand for the announcement, Wynne announced Monday the province has put forward access road proposals to connect three of the nine Matawa communities closest to the deposit, whose traditional territory falls within the mineral-rich Ring of Fire deposit in the James Bay lowlands.

The announcement seems to be the outcome of a letter Wynne sent to the nine Matawa chiefs in May. In that letter, the premier warned the chiefs not to squander the opportunity for permanent road access to connect their remote, fly-in communities to the rest of the province and to reap the benefits of multi-billion-dollar Ring of Fire development.

Seeming to blame the chiefs for the delay in getting the project moving, she wrote that with little progress in three years on developing the infrastructure needed to get at the Ring of Fire riches, the province couldn’t wait much longer for the communities to reach a consensus on roads.

Monday’s announcement that agreements had been reached with three of the Matawa First Nations appears to be the culmination of that spring-time threat.

Here’s why. The province began touting the Ring of Fire all the back in 2007. Ten years ago. With promises of jobs and prosperity, first Dalton McGuinty’s and then Wynne’s governments said the deposit had the potential to transform the North.

And the Ring of Fire is chock-a-block with riches: At least $60-billion worth of zinc, nickel, copper, gold and chromite, a metal used in the production of stainless steel.

Getting at it will be difficult. There some 30,000 claims spread mainly over a 20-kilometre strip of swamp in the 5,000-square-kilometre Ring of Fire.

The area is in the muskeg of the James Bay lowlands. It’s wet and swampy. Mining the area will require serious ingenuity. The lowlands are also a massive carbon sink, a valuable resource in the fight against climate change. Mining it in such a way that protects the area from destruction will be a serious challenge.

Developing the deposit must be done in a way that greatly benefits the First Nations in the area and doesn’t destroy the land they call home.

Before any minerals can come out of the ground, there must be agreements with First Nations, infrastructure to access the deposits and move material out, environmental assessments to protect the flora and fauna.

But what has the province done in the decade since “Ring of Fire” became a term for a mineral deposit (at least in Ontario) and not the title of a Johnny Cash song or an area of high volcanic activity in the Pacific Ocean? The province’s efforts to move the development forward have been myopic, disjointed, and unfocused. Much passionate lip service has been paid to the importance of the deposit, but little else.

In 2011, the province created the Ring of Fire Secretariat, ostensibly to work with and consult First Nations, Northern Ontario communities and mining companies to encourage the development of the deposit. The same year, a Ring of Fire office opened in Thunder Bay to promote opportunities in the Ring of Fire and facilitate development. Not much happened.

Seven years after Noront Resources found nickel in the Ring of Fire, in 2014, the province created the Ring of Fire Infrastructure Development Corporation, which was supposed to create partnerships between First Nations and the private and public sectors, so a road could be built into the area of the deposit.

Fits and starts. No clear plan forward. Uncertainty. These have been the hallmarks of the province’s approach. Uncertainty is not a way to attract or to keep investors.

It’s not the First Nations or mining companies who are supposed to lead the charge on development, to set the pace, to establish benchmarks; that’s the province’s job.

In 2015, frustrated with the lack of movement and the lack of direction, and after having spent $500 million over five years trying to develop its Black Thor deposit, Ohio miner Cliffs Natural Resources washed its hands and sold its stake to Noront.

Noront has held on, with its CEO, Alan Coutts, running point in the media trying to move the process along and to keep investors from flying the coop in frustration. He said this week the road announcement will “re-energize” development. Let’s hope he’s right.

The province has announced a road, which is a good and necessary first step. But what the Ring of Fire really needs is a road map, and, ten years later, that doesn’t seem to be on the horizon.