Hand it to the City of Greater Sudbury: where other Canadian municipalities gave into the fear of getting sued and banned it outright, in the Nickel City you can still jump on a sled and shoot down a municipally owned hill at break-neck speed.
0
Jan 12, 2015 5:21 PM By: Sudbury.com Staff 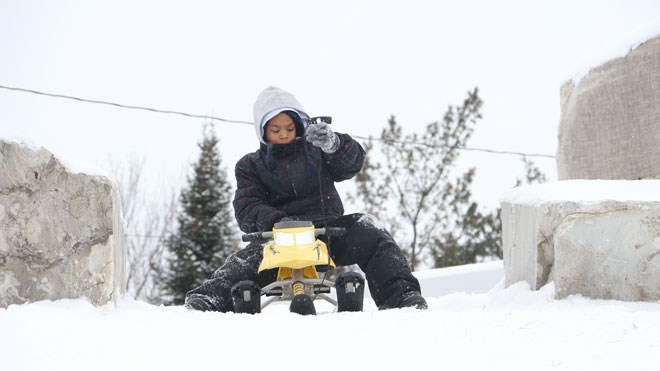 With Queen's Athletic Field closed to sliding Sunday, Rayan Sandiwidi slid down a hill in Bell Park with her father and brother. Photo by Jonathan Migneault.
Hand it to the City of Greater Sudbury: where other Canadian municipalities gave into the fear of getting sued and banned it outright, in the Nickel City you can still jump on a sled and shoot down a municipally owned hill at break-neck speed.

You just can't do it at Queen's Athletic Field, a sensible decision from our perspective.

Tobogganing was the hot topic in the city — and the province — last week, dominating headlines and social media feeds as people expressed exasperation that the nanny state was spoiling all the fun.

Having a sliding hill intersect with a skating oval, as it does at Queen's Athletic, is a recipe for injury anyway. And the popular hill in Bell Park was closed off only temporarily, so city staff could put hay bales in front of light posts to make for a safer ride.

While some see the spate of tobogganing bans — or rumours of bans — as symptoms of the nanny state, NorthernLife.ca can't find fault with municipalities for choosing to ban sliding.

A year ago last month, Darren MacDonald did an admirable job of digging into the thorny issue of municipal lawsuits and their frightening impact on insurance rates.
Here are some sobering numbers.

The Association of Municipalities of Ontario (AMO) told us that since 2007, municipal insurance costs have outpaced the Canadian inflation rate by more than 30 per cent as a direct result of personal injury lawsuits.

And we're not an anomoly. Those rates are pretty consistent across the entire province, AMO told us.

Those numbers are scary, but even more scary is a piece of legislation in the Ontario Negligence Act that is behind the skyrocketing insurance costs. It's called "joint and several liability," but we prefer to call it by the more colloquial and provocative appellation: the one per cent rule.

What that means is, in Ontario, if a lawsuit has several defendants, the one with the deepest pockets can be made to pay the entire damage award even if their share of the responsbility is as little as one per cent.

Municipalities not only have deep pockets (since they have the ability to raise taxes), but they are responsible for policing, roads, social services, child care — all areas with a high potential for lawsuits.

People aren't stupid. They go where the money is. Of course, when you sue a municipality, you're not just taking money for your friends, your family, your neighbours, your employer and so on, you're taking it out of your own pocket.

From the woman who burned herself with hot coffee in a McDonald's drive-thru to the guy who sued Anheiser-Busch in 1991 because beer didn't make him Casanova, it seems more and more North Americans — the richest people in all the world — are willing to portray themselves as victims, especially if there's potential profit in it.

Legislation like the one per cent rule makes it much easier.

Make no mistake, if the municipality is at fault, it should pony up. But as MacDonald cited in his Dec. 18, 2013 story, there are countless cases where municipal involvement — let alone culpability — was tangential at best.

Here are some other sobering numbers.

Toboggans can reach speeds of 35 km/h. Under the right conditions, they can break 60 km/h.

A 2007 study by the Canadian Institute for Health Information (CIHI), found between 2003 and the time of the study, seven people died sliding, several of them children.

Using CIHI data from 2008, neurosurgeon Dr. Charles Tator, an Ontario expert in brain and spinal cord injury, looked into the rate of "catastrophic injury" (which he defined as injury that causes permanent or long-term disability) for sliding, and found it was four times higher than for rugby and six times higher than for hockey.

One in six sliding injuries happen to children between two and four years old. Predictably, children are the ones who get hurt most often.

But just because it can be dangerous doesn't mean we should ban sliding. It means as parents, we need to be cognizant of the inherent dangers and do what we can to mitigate them. Check the hill conditions for ice and jumps; wait until a line is clear before starting to slide; don't overload a sled; the older the child, the more aware he or she is to bail out if necessary.

When it comes to children and sliding, minimizing the risk maximizes the fun.

We don't know the details yet of the lawsuit that is being blamed for ending sliding at Queen's Athletic Field, so it would not be fair to comment on the case without knowing the facts.

But we must face up to the fact that, like so many enjoyable pastimes, sliding is inherently risky. It doesn't mean we should avoid it, but it does mean that each of us has a personal responsibility for our own, and our children's, safety when we decide to careen down an icy hill.

Ontario's municipal governments need to make the one per cent rule a priority. AMO says it's been lobbying about it. We say lobby harder. It's costing us millions upon millions of dollars every year. Taxpayers must be protected from rulings where municipal culpability is below a reasonable threshold.

We're heading into a byelection. The one per cent rule might not be a sexy campaign issue, but it is an important one.

And finally, we must also face up to the fact that, when something bad happens, there isn't always someone to blame. Even if it feels like there should be.