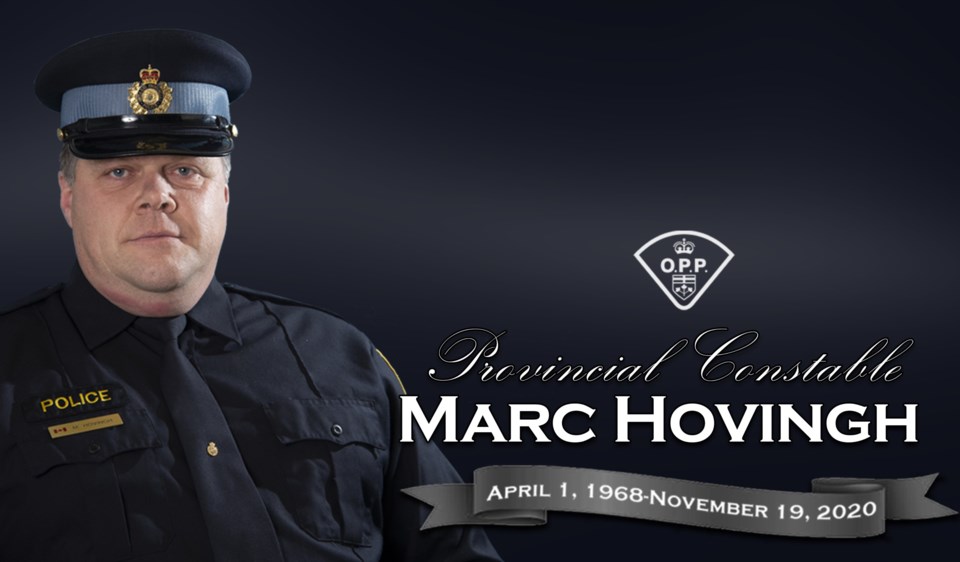 A funeral service is to be held on Saturday for an Ontario Provincial Police officer who was killed in the line of duty. (File)

Private funeral to be held for slain OPP Const. Marc Hovingh on Saturday:

A funeral service is to be held on Saturday for an Ontario Provincial Police officer who was killed in the line of duty. Const. Marc Hovingh died Nov. 19 in a shooting on Manitoulin Island that also resulted in the death of a civilian. The Ontario Provincial Police Association says the private service is to be livestreamed. Sudbury.com will carry the livestream, starting at 1 p.m. Hovingh, a 28-year veteran of the force, is survived by his wife Lianne and children Laura, Nathan, Elena and Sarah. Hovingh, who was 52, was one of the officers who responded to a call Thursday regarding an "unwanted man'' on a property in Gore Bay, Ont., on Manitoulin Island. According to the Special Investigations Unit -- Ontario's police watchdog -- Hovingh and civilian Gary Brohman died in hospital after an exchange of gunfire.

The man and woman accused of first-degree murder in the firearm-related death of Killarney man Brant Burke in October are his estranged wife and brother, the Nipissing West OPP have confirmed to Sudbury.com. Brant Burke’s body was discovered a month ago, on Oct. 25, on a trail in the Point Grondine Reserve off Highway 637, the road that leads to the hamlet of Killarney. Police were responding to what was termed "a sudden death" at the time. In an earlier news release, OPP revealed that a post-mortem examination confirmed the cause of death was a firearm-related injury. After an extensive investigation, Ontario Provincial Police said two people were arrested and charged this week. Brant Burke’s brother, 58-year-old Kerry Burke of Killarney, was charged with first degree murder, as was his estranged wife, 39-year-old Melissa Sheridan of Sudbury. The deceased man’s obituary said he is the father of four and grandfather of two. According to social media posts, two of these kids appear to be his children with Melissa Sheridan. Melissa Sheridan and Kerry Burke are listed in the obituary as his wife and brother, respectively. Get the full story here.

Greater Sudbury Police confirmed that one person was killed in a collision on MR 55 near Copper Cliff Friday morning. The collision involved a pickup truck and a pedestrian. The pedestrian, a 38-year-old man, has been pronounced deceased. Officers are in the process of notifying the man's family, Greater Sudbury Police said on their Twitter account.  Police spokesperson Kaitlyn Dunn said the collision was called in just before 3:45 a.m. Friday. The collision occurred approximately halfway in between Balsam Street in Copper Cliff and the Big Nickel Mine Road ramp.

If your place of business is ramping up activity for the holiday season, Public Health Sudbury and District is advising precautions to keep customers and employees safe during this time. The warning was published during the regular weekly update provided by the local health unit. The information is appropriate given that Sudbury is designated in the "Yellow-Protect" category, one of the five color-coded zones for taking preventive measures during the pandemic. It has been that way since Monday, Nov. 16. While the green zone is designated for most parts of Ontario requiring standard precautions and allowing for the broadest scope of public activities, the yellow category is one step up, with specified limits on both public and private activities. The warning about taking precautions ahead of the holiday season is directed at public venues where increased activity can be taking place. This could include shopping malls and retail spaces for Christmas shopping. Find more on this story here.

Police say two people died as a result of the two-vehicle collision, which occurred at around 7:25 a.m. on Highway 17 on Nov. 27, about one kilometre west of the Highway 6 turnoff (the highway leading to Espanola and Manitoulin Island). OPP Technical Collision Investigators (TCI) were called in to assist with the investigation, said the OPP. The investigation is ongoing and further information will be provided once available.

The message from local police services is simple this holiday season: have a plan before you start drinking. Drinking and driving is not trending downward, said Greater Sudbury Police Service’s new traffic sergeant, Ryan Johnson, during the media launch of the Festive RIDE campaign, which officially gets underway Dec. 1. That means it’s going in the wrong direction. “The No. 1 preventative measure for impaired driving is having a plan,” said Johnson “Once you’ve been drinking, you’re more than likely to not make the right decision. If you know you’re going to be drinking, have a plan to get home safely.” If holiday revelers do decide to get behind the wheel after drinking, be warned: Officers will be conducting RIDE checks any day, any time and anywhere, Johnson said. “The world is hurting enough right now, so don’t add to the heartache by choosing to drink and drive,” Johnson said.  Friday also marked the start of the Action Sudbury’s 32nd annual Red Ribbon campaign. The red ribbon is a symbol that represents the thousands of people killed or injured by drunk and drugged driving. It’s also a reminder to people to drive sober through the holidays, as well as the entire year. More on this story here.

Man arrested after pulling knife on security at School of Architecture:

A man was held pending bail court on Friday after he was arrested Nov. 26 for pulling a knife on security guards at the School of Architecture. The man was taken into custody without incident, and there were no injuries, said a tweet Thursday from Greater Sudbury Police. He was scheduled for bail court on Friday.

Festival of Trees is back at Science North:

After a 20-plus-year hiatus, Science North and the Sudbury Charities Foundation are bringing back a holiday tradition in the form of the Festival of Trees. For more than 20 years, Science North and Sudbury Charities Foundation have partnered to deliver the spectacular Festival of Lights, which launched Nov. 22 and is available for viewing daily. The trees have been decked out with all the holiday glamour, and many of the trees have gift cards or other items — one tree had bottles of wine underneath — that will go to the winning bidders. In this unusual year, these two charities have deepened their engagement to bring back a classic holiday tradition, the Festival of Trees, said a news release. The festival will kick off the holiday season with a renewed version in the style of a virtual silent auction taking place now until Dec. 6. This year's event features 17 trees donated by local businesses and organizations with the goal of raising $20,000 to support initiatives at Science North and other groups supported by the Sudbury Charities Foundation. Full story here.