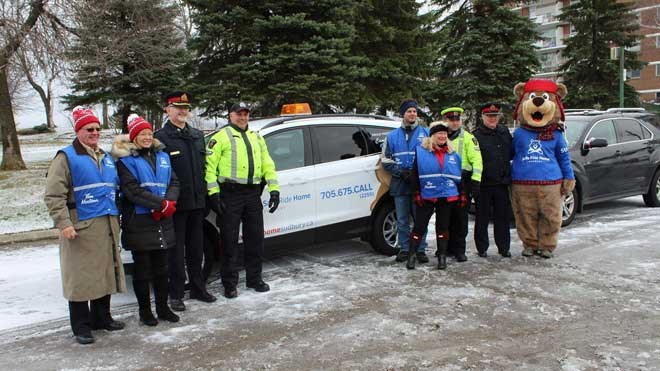 Man alleged to have stabbed woman, punched baby back in court Dec. 17:

A resolution date of Dec. 17 has been set for the charges against Alexander Stavropoulos, the man who allegedly stabbed a woman and repeatedly punched her infant in a Marcus Drive parking lot in early June. He is charged with two counts of attempted murder, two counts of possession of a weapon for a dangerous purpose and one count of breaching probation in connection to the June 3 incident, where he allegedly stabbed the 35-year-old mother in the neck. Her nine-month-old infant was not stabbed, but sustained multiple bruises after being struck repeatedly during the attack. In mid-October, the court heard Stavropoulos intended to plead guilty. He will return to Courtroom C at 2 p.m. on Dec. 17.

It was a day of fun, camaraderie and raising awareness Nov. 3 as the Down Syndrome Association of Sudbury (DSAS) hosted its sixth annual Go21 Walk at Lockerby Composite School. Formally known as the Buddy Walk, the Go21 Sudbury Walk for Down Syndrome Awareness is hosted during National Down Syndrome Awareness Week to raise funds and awareness for individuals with Down Syndrome in the community. It is part of a national movement by the Canadian Down Syndrome Society, who named the event in recognition of the extra material on the 21st chromosome that determines if a person has Down Syndrome. "I think it's really important to show ... that there are people with exceptionalities around and we're just like you guys and we want the same things in life," said Paula Cunningham, vice president of DSAS. While Cunningham said that the total amount raised Nov. 2 has yet to be calculated, donations thus far have surpassed $11,000. The majority of this funding comes from the event's sponsors she said. Cunningham said Mike Foligno donated $5,000 on behalf of the Janice Foligno Foundation and Day Construction donated around $2,000. Get the full story here.

This Sudbury doc says cannabis might be the best thing he’s ever prescribed for pain:

A Sudbury physician says cannabis might be one of the best things he has ever prescribed for his patients and it is something he hopes other physicians will consider, especially if they’re looking to provide chronic pain relief. Dr. Lionel Marks De Chabris has been prescribing cannabis to his patients for more than a decade. He said he is definitely in a minority among physicians in the Sudbury area because he believes many physicians are just not yet comfortable with the idea of prescribing cannabis. He added that cannabis is a valid alternative to prescribing opioids for pain management. In a recent interview with Northern Ontario Medical Journal Marks De Chabris commented on the recent one-year anniversary of the legalization of recreational cannabis use in Canada. But he said that really should have no impact on patients who use cannabis for medical reasons. More on this story here.

'Tis the season for Acts of Kindness, coffee talk and holiday lights:

We’ve got some exciting stuff going on around the Northern Life / Sudbury.com building on Elgin Street, so managing editory Mark Gentili is doing a bit of housekeeping this week and get you in the know. Once again, we’re bringing back our popular 12 Acts of Kindness Christmas campaign. The campaign has become a staple of our holiday coverage. We pick 12 deserving Sudburians who need a bit of a hand and surprise them with something special. Sticking with Christmas, Greater Sudburians have some incredible holiday lights displays. We're always impressed with the quality of the lights we randomly pass by in the car during the season. Problem is, while my wife and I love looking at the lights, unless you know where the best displays are, finding them can be a real hassle and waste of fuel. So this year, at Sudbury.com we’d like to build a holiday lights map to make it easier for me (and everyone else, of course) to find the city’s best holiday displays. Again, we need your help to do it; we need you to tell us about your holiday lights display or your neighbours or your friends. Find out more here.

World-renowned architect and expert on sustainable buildings Jason McLennan returned to his roots in Sudbury to share his knowledge with students at the McEwen School of Architecture. From Nov. 5 to 6, McLennan was a guest in Laurentian University's Architecture Series, led two workshops, and participated in a roundtable discussion with students. McLennan, who was born in Sudbury and now lives outside of Seattle, is the CEO of McLennan Design and the founder and chair of the International Living Future Institute as well as the Cascadia Green Building Council, a chapter of both the United States Green Building Council and the Canada Green Building Council.  He has played a foundational role in the green building movement around the globe by creating the Living Building Challenge (LBC). Find more on this story here.

The Sudbury Wolves announced Wednesday that 19-year-old defenceman Adam Samuelsson has committed to the hockey club. The Rye, New York native was selected by the Wolves in the fifth round of the 2016 OHL Entry Draft. He spent the next two seasons as a member of the USA National Development program. The 6-6, 235 lb. defenceman began last season with Boston College and left the school to join the Sioux City Musketeers of the USHL in December of last season. Samuelsson will join the Wolves this week and is expected to play this Friday night when the team hosts the Niagara IceDogs at 7:05 p.m. for their annual Remembrance Day and Military Appreciation game.

A mix of sun and cloud in the Friday forecast with some chilly temperatures this morning. It's going to feel like -17 with the win chill this morning, getting up to a high of -3 this afternoon. Mainly cloudy into the evening with chances of some flurries. Overnight low will get down to -8. For current weather conditions, short-term and long-term forecasts visit Sudbury.com's weather page at www.sudbury.com/weather.

Here are seven stories to start your day
Jan 18, 2020 8:00 AM
Comments
We welcome your feedback and encourage you to share your thoughts on this story. We ask that you be respectful of others and their points of view, refrain from personal attacks and stay on topic. To learn about our commenting policies and how we moderate, please read our Community Guidelines.