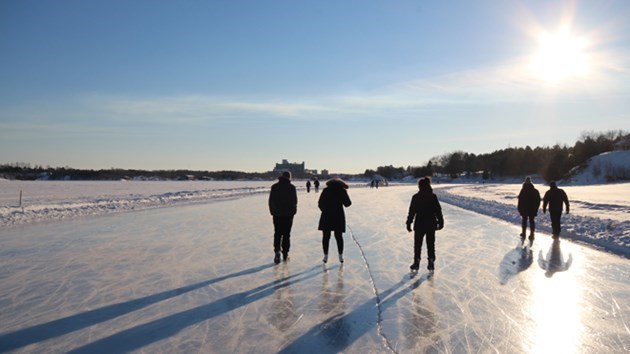 The Ramsey Lake Skating Path officially opened Wednesday afternoon. The path is for skating only; hockey, ringette and shinny are not permitted. Regular operating hours are as follows: Monday - Friday from 4 - 8 p.m.,  Saturday from Noon - 8 p.m., Sunday from Noon - 6 p.m.

City's supervised opioid site application should be ready by spring:

Reducing stigma, improving access to treatment and focusing on harm reduction are major planks of the Sudbury’s strategy to address surging number of opioid addicts, city council heard Tuesday evening. Penny Sutcliffe, the medical officer of health, and Police Chief Paul Pedersen, co-chairs of the Community Drug Strategy, updated council on efforts to get the situation under control. “This is a crisis,” Sutcliffe said, one that took a long time to develop, and one that will take a long time to fix. Opioid prescriptions for chronic pain began in the 1990s, and when the drug Oxycontin was introduced, she said it was billed as having a low rates of addiction. By 2002, Canada was second in the world in opioid prescriptions. In 2013, fentanyl became available, in time release patches that are 50-100 times stronger than morphine. Abuse of the patches began soon after, she said. Between 2009 and 2014, there were 655 fentanyl-related deaths in Canada. Get the full story here.

Two sent to hospital after home invasion, assault in the Donovan:

Greater Sudbury Police are asking seeking the public's help in identifying two suspects involved in a home invasion and assault that took place in the Donovan on Monday. On Jan. 20 around 11:30 p.m. two men entered a residence on Bloor Street and violently assaulted the two residents inside and robbed them. The two victims were taken to hospital where they were treated for extensive injuries and subsequently released. It has been reported that the two male suspects are in their mid-twenties and were wearing dark clothing at the time of the assault and robbery. According to police, this was an isolated incident and there is no threat to public safety at this time. Anyone with information is asked to contact the Greater Sudbury Police Service at 705-675-9171 extension 2341 or Crime Stoppers at 705-222-TIPS (8477).

A Sudbury union official representing English public elementary teachers says she knows having your kids out of school due to strikes is hard, but teachers are striking “because we have no other recourse.” A rotating, one-day strike by members of the Elementary Teachers' Federation of Ontario (ETFO), which includes full-time and occasional teachers, as well as early childhood educators, hit Greater Sudbury Wednesday. Elementary classes at the Rainbow District School Board were cancelled Jan. 22. ETFO has one-day strikes planned in different boards across the province every school day this week, and the strikes continue into next week.  All four Ontario teachers' unions are engaged in either one-day strikes or work-to-rule. More on this story here.

Sentencing for teen with kill list won't happen for a few months:

With a pre-sentence report expected to take at least eight weeks, Zachary Pilon's case was before the courts today, but only to set another date in February. Pilon, represented by his lawyer, Glenn Sandberg, pleaded guilty on Jan. 15 after he used social media to threaten the lives of 40 people at College Notre Dame last March. The teen was arrested March 20. In an Instagram post, Pilon wrote, “Friday March 22nd, everyone will finally know my name ... Look out CND.” The post included a list of dozens of names titled "CND KILL LIST". He was released on bail March 21 and charged with criminal harassment and uttering threats. His bail carries strict conditions, including a curfew and no contact with all of the people he named in his list.

OPP report: Alcohol involved in almost half of snowmobile fatalities over the past decade:

The Ontario Provincial Police has released a report in conjunction with Snowmobile Safety Week, indicating that over the past 10 snowmobile seasons they have investigated 175 snowmobile fatalities.Among the findings in the report, excessive speed, loss of control, driving too fast for the conditions and ability impaired by alcohol were listed as the top contributing factors. In fact, alcohol was involved in almost half (45 per cent) of the deaths. Another fact is that almost half (45 per cent) of the snowmobilers who died were traveling on frozen lakes or rivers at the time of the incident. The circumstances that led to the deaths include intentionally driving onto open water (puddle jumping/water skipping), breaking through the ice and collisions with other snowmobiles and natural landmarks. The OPP is reminding operators that no ice is safe ice. All riders should ensure they use proper safety equipment in addition to wearing appropriate outerwear for the environmental conditions they may encounter. Snowmobile Safety Week runs from Jan. 18 - 26.

A move intended to help keep property taxes down ended up biting city staff in the behind Tuesday, as angry politicians blamed them for not alerting them to the change. As a result, 26,000 tax bills set to be mailed out this week are being delayed as city council passed a motion re-establishing the original due dates. The decision will not only cost about *$12,000 to destroy the bills and prepare new ones, the city won’t receive the $150,000 in investment revenue the early bills were supposed to raise. Sending the bills out three weeks earlier than normal was part of a series of options staff prepared to keep the 2020 tax increase at 3.5 per cent. The final number came in at 3.3 per cent, and councillors later voted to add a 1.5 per cent levy for infrastructure renewal projects. While not raising new revenue, the early tax bills would have allowed the city to earn $150,000 in investment income since it would have the tax money a bit earlier. More on this story here.

Another fairly mild winter day in the forecast for Thursday. Cloudy with 40 per cent chance of flurries. There's a risk of freezing drizzle in the morning. Thurday's high will get up to zero. Cloudy into the evening with 40 per cent chance of flurries. Overnight low will be -2, feeling like -6 with the wind chill. For current weather conditions, short-term and long-term forecasts visit Sudbury.com's weather page at www.sudbury.com/weather.

Here are eight stories to start your day
Feb 20, 2020 6:00 AM
Comments
We welcome your feedback and encourage you to share your thoughts on this story. We ask that you be respectful of others and their points of view, refrain from personal attacks and stay on topic. To learn about our commenting policies and how we moderate, please read our Community Guidelines.