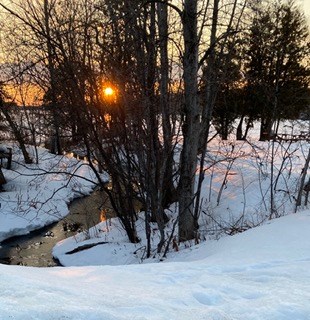 Catherine Hicks snapped this photo during her nightly walk last week overlooking Long Lake. We still want to see your amazing images of the gorgeous landscape of our city, but there is more to Greater Sudbury than our rocks and trees and animals. There are some incredible photographers in our city who aren't shooting landscapes; they're shooting our urban centres, our people, our growth and our decay — we want to see all of these. Send high-resolution images to apickard@sudbury.com. (Catherine Hicks/for Sudbury.com)

State of emergency gives city power to ramp up enforcement:

Mayor Brian Bigger declared a state of emergency in the city of Greater Sudbury on April 6, but for the time being it doesn't sound as though much will change in the day-to-day lives of Sudburians. Sudbury's state of emergency will run concurrent with the province's state of emergency that has been in place since March 17. The mayor called the situation "truly unprecedented" and that he will be using everything in his power to protect the citizens of Greater Sudbury, including the most vulnerable citizens, seniors and the homeless. The state of emergency allows the mayor and council to amend or create bylaws more expeditiously should they be called for. In issuing his statement today, Bigger commended the efforts of the city's residents, but insisted that they can still work harder. While the state of emergency declaration does allow the city to respond more quickly and effectively to concerns, as well as streamline their decision-making powers, no decisions have been made as of yet and no bylaw changes have been put into place. Get the full story here.

A 19-year-old man faces a number of drug-related charges including possession of a weapon for a dangerous purpose after he was found with conducted energy weapon on Sunday night. Greater Sudbury Police were called to a disturbance involving a man believed to have a conducted energy weapon (CEW) in his possession on Adie Street in Greater Sudbury. Upon arrival, the officer saw two men fleeing the scene on foot. The officer followed the men to the intersection of Lansdowne Road and Frood Road where one of the men was seen throwing something into a garbage. Both men were stopped by the officer and the garbage can was checked. The officer found a CEW in the garbage, as well as close to 2,800 Xanax pills, almost 110 grams of crystal meth and an electronic scale. The street value of the drugs is approximately $25,000. The suspect was placed under arrest for possession of a weapon for a dangerous purpose, possession of a prohibited weapon, possession for the purpose of trafficking a Schedule I substance and possession for the purpose of trafficking a Schedule IV substance. Upon searching the man, the officer found $17,000 in cash and the man was additionally charged with possession of property obtained by crime over $5,000. He was taken to police headquarters and held for bail court on April 6. The second man was released unconditionally as he did not have any involvement with the weapon, drugs or money.

Off the Street Emergency Shelter being moved to Regent Street hotel:

The Off the Street Emergency Shelter program is being moved to the Canada's Best Value Inn on Regent Street to house the city's vulnerable population as part of the city's response to the COVID-19 pandemic. The emergency shelter will be set up on the first floor of the hotel and will provide access to washrooms, showers and beds while allowing for proper physical distancing. A supportive isolation shelter will be set up on the second floor, offering 24-hour care for persons who are homeless and are being tested for or are diagnosed with COVID-19. The City of Greater Sudbury is using the more than $320,000 from the federal government to help prevent the spread to the city's homeless.

The province of Ontario now has 4,347 confirmed positive cases of COVID-19, up 309 over Sunday, the Ministry of Health reported Monday. There were also 13 more deaths, for a total of 132 people in the province with COVID-19 who have died. There are now 1,624 Ontario cases classified as “resolved," meaning the person has recovered. A total of 78,796 people have been tested in the province for COVID-19, and there are 329 people under investigation for the virus. Public Health Sudbury & Districts is still reporting 26 confirmed positive cases of COVID-19 — this number has not increased since Saturday, when one new case was announced.

Premier Doug Ford said Monday morning Ontario has about a week's supply of masks and other personal protective equipment (PPE) in its stockpile after the U.S. blocked a shipment of three million masks to the province yesterday. Speaking with Global News Toronto, Ford said a shipment of three million medical masks bound for Ontario was stopped at the border on Sunday. “We had three million masks stopped at the border this weekend coming up to Canada. That’s unacceptable. Absolutely unacceptable that they’re doing this,” Ford said in an interview with Global News. This blocked shipment means Ontario only has about a week's supply of masks and other PPE for health care workers. Ford said he hopes something can be worked out — and exemption for Canada, he called it — between Canada and the U.S. to allow medical supplies to keep flowing. Watch Monday's press conference here.

Prime Minister Justin Trudeau says 240,000 people successfully applied for emergency relief amid the COVID-19 pandemic in the first few hours after the federal government opened the process Monday morning. Only people with birthdays in the first three months of the year were able to apply for the Canada Emergency Response Benefit on Monday. The benefit offers $500-a-week payments for workers who have lost all their income. Trudeau says changes to the program will come soon to offer help for people whose hours have been slashed but who are still working a little. Check out what Trudeau had to say at his daily media briefing on Monday morning here.

A memorial for the victims of the Humboldt Bronocs bus crash will be online this year due to the COVID-19 pandemic. On Monday, on the two-year anniversary of the crash that claimed 16 lives, including St. Albert's Jaxon Joseph, Conner Lukan, Logan Hunter and Stephen Wack, and injured an additional 13 people Canadians can mourn the loss virtually rather than go to Humboldt, Sask. At noon Monday a website launched to allow people to grieve and reflect on the bus crash. The plan for the two-year anniversary to have a temporary exhibit that would feature memorabilia items from the days, weeks and months after the crash, but now that the country is self-isolating due to COVID-19, they had to shift the memorial online. The site will be featured on the City of Humboldt’s website and will have photos, videos and a guestbook.

Sunny start to the day with chances of rain showers this afternoon. Increasing cloudiness into the afternoon then 30 per cent chance of showers. Tuesday's high will get up to around 9. Rain showers changing to periods of drizzle after midnight. Risk of freezing drizzle overnight. Low will get down to 2. For current weather conditions, short-term and long-term forecasts visit Sudbury.com's weather page at www.sudbury.com/weather.

Here are seven stories to start your day
Jun 4, 2020 6:00 AM
Comments
We welcome your feedback and encourage you to share your thoughts. We ask that you be respectful of others and their points of view, refrain from personal attacks and stay on topic. To learn about our commenting policies and how we moderate, please read our Community Guidelines.