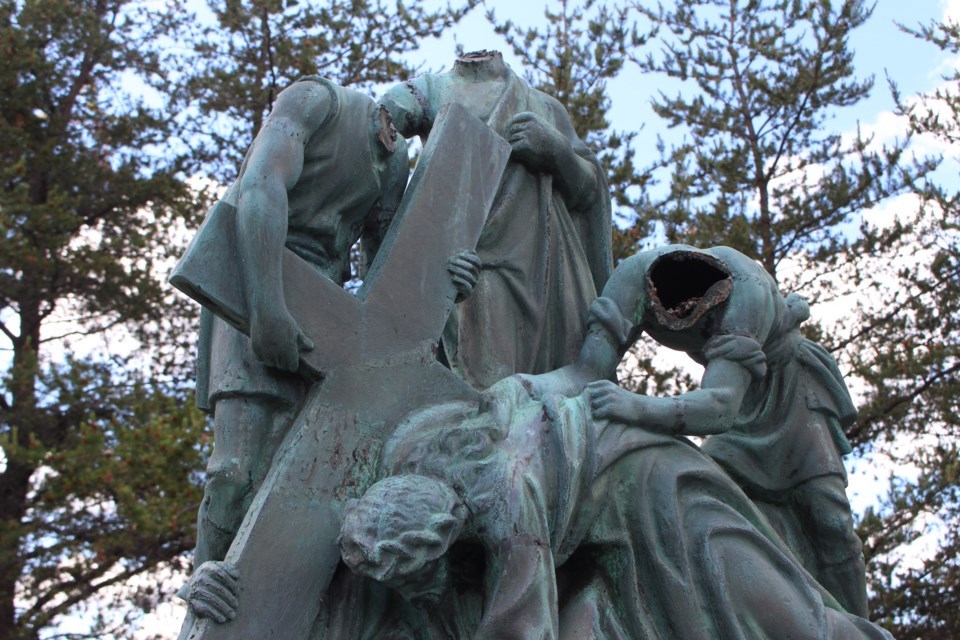 Reward for info on Grotto vandalism upped to $4,500:

More Sudburians are pitching in to increase a reward for information leading to the arrest of those who vandalized the Grotto of Our Lady of Lourdes, which overlooks downtown Sudbury. Sometime between 1 p.m. on May  22 and 7 a.m. on May 23, four bronze statues were decapitated at Grotto, which is located at 271 Van Horne St. Crime Stoppers described the statues as having great historical value to the community, having been placed at the site in the early 1900s. The heads that were removed have not been found. When news first broke, the Lougheed family offered a $1,000 reward for information that leads to an arrest of those responsible. Now, that reward has jumped to $4,500 after local lawyers Glenn Sandberg and Barry Poulson, retired lawyer Victor Vere and business owner Michael Toppazinni all pitched in to boost the amount. “It is good to see the community support in apprehending those responsible for such a heinous and wrong act,” Gerry Lougheed said. A guaranteed reward is being offered for tips received before midnight on Thursday, July 16 if the information leads to the identity of the culprits (reward money will be divided if many successful tips are received). For tips received after the deadline, the standard process for determining reward amounts will apply. If you want to provide information on the identity and/or location of these culprits or have any information about other criminal activity, and you want to remain anonymous, call Crime Stoppers at 705-222-TIPS (8477) or 1-800-222-TIPS (8477), or submit an online tip at SudburyCrimeStoppers.com.

A Sudbury man is presumed drowned after he was pulled from the waters of Agnew Lake early Monday morning. Officers were called to Agnew Lake in Baldwin Township at 6:35 a.m. on July 6 for a report of a possible drowning. The 47-year-old man was pronounced dead at the scene. The deceased is Francois Robert of Sudbury. The investigation is ongoing under the direction of the Office of the Chief Coroner and the Forensic Pathology Service (OCC-FPS).

Driving with no paperwork and no licence plates brought a sudden end to Canada Day celebrations for one Sudbury driver and ticketing for five hefty charges. On July 1, Ontario Provincial Police (OPP) Sudbury T.I.M.E officers stopped a BMW passing by the OPP detachment with no license plates. It was later determined that the 29-year-old was also driving without a considerable amount of necessary paperwork, and with one unpaid fine for driving while suspended under their name. As a result, the driver in question was charged with failing to change the name on their vehicle ownership, having no license plates, operating a vehicle with no insurance, and two counts of driving while under suspension.

The city of Greater Sudbury could be on its way to becoming a hot spot for brewpubs in Northern Ontario, as the city's planning committee gave the go ahead on a zoning bylaw amendment that will make it easier for small-scale breweries to open in the Nickel City. Home to a pair of brewpubs, Stack Brewhouse and Spacecraft, Greater Sudbury's brewpub industry is still in its infant stages, but that may be in part due to some antiquated zoning bylaws that require amendments in order to allow the growing industry to flourish. These businesses combine traditional industrial functions like brewing and distilling with service-related functions such as restaurants and retain. Ward 4 coun. Geoff McCausland spearheaded the initiative that set the wheels in motion for Sudbury to make it easier for anyone looking to open a brewpub in the city. The councillor has his own experience in the beer world, and ran into some speed bumps when he tried to open a brewery of his own nearly a decade ago. "I tried to open a brewery about eight or nine years ago and I got to the planning stages and the city told me that it needed to be in industrial zoning and I said that was ridiculous," said McCausland. Stack Brewing's brewpub on Falconbridge Road is already located on industrial land so they had no hiccups when it came to setting up shop, but Spacecraft on Notre Dame had to go through some rezoning in their quest to establish a brewpub closer to the city's core. Get the full story here.

Members of the Greater Sudbury Police search and rescue team located 48-year-old Garry Poulin, deceased in Lake Laurentian, on Monday afternoon. The GSPS team was assisted by the OPP helicopter and underwater search and rescue team. Foul play is not suspected in Poulin's death. "Our deepest condolences go out to his family and friends," said GSPS in a tweet.

Before families were taking on projects as an effort to keep busy at home during the school closure, two kids made it their mission to be entered into the book of Guinness World Records. With help from their parents, who own the Northwest Fudge Factory in Levack, Ella, 10, and Austin, 5, constructed a Nanaimo bar that weighed a whopping 530 pounds. The family unveiled their delicious creation to the public during the grand opening of the new Guinness World Record exhibit at Science North on March 7, just days before COVID-19 was announced a global pandemic. After submitting photos, logs, the final weight and measurements more than four months ago, the family recently received the official certification from Guinness. Watch the video here to see what went into making the world's largest Nanaimo bar. The family now holds six dessert-related Guinness World Records, including the World's Largest Fudge slab, which weighed 5,750 pounds.

Huntington University is turning 60 and wants to hear from alumni:

Huntington University, one of the first post-secondary institutions in all of Northern Ontario, is turning 60 this year. As part of its birthday party, the school wants to catch up with alumni from years past. “We’re celebrating an amazing history here at Huntington,” said Thomas Barker, president of the Huntington University Alumni Association. “Our great legacy comes in huge part because of the amazing students that walked our halls and pursued their education as proud Huntington graduates over the past six decades.” Huntington opened in 1960, the school said in a news release, and was one of the first post-secondary institutions established in Northern Ontario. The school’s first two graduates, Mary Conroy and Charles Johnson, crossed the stage in 1961. Two years later, in 1963, Huntington graduated its first class. These milestones and countless others will be commemorated by Huntington University throughout 2020. Are you an HU alum, you can contact the school at 1-800-461-6366, ext. 203 (toll-free in Ontario) or 705-673-4126, ext. 203, or simply send an email to ccatt@huntingtonu.ca.

A few showers in the forecast this morning, ending near noon then a mix of sun and cloud. There's a 40 per cent chance of showers this afternoon and a risk of a thunderstorm in the afternoon. High will get up to 29 today, feeling like 37 with the Humidex. Partly cloudy into the evening with a 40 per cent chance of showers. Overnight low will be sitting at 18. For current weather conditions, short-term and long-term forecasts visit Sudbury.com's weather page at www.sudbury.com/weather.

Here are some stories to start your day
Aug 4, 2020 6:00 AM
Comments
We welcome your feedback and encourage you to share your thoughts. We ask that you be respectful of others and their points of view, refrain from personal attacks and stay on topic. To learn about our commenting policies and how we moderate, please read our Community Guidelines.