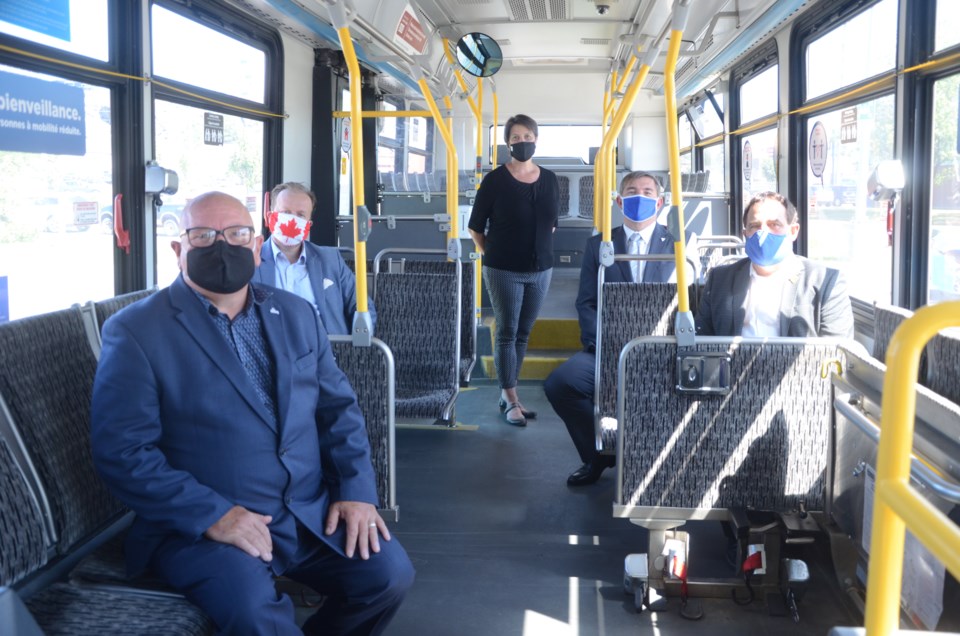 Fifty-three new transit buses are coming to Greater Sudbury as part of an almost $100-million investment from three levels of government. The Government of Canada is investing more than $39.7 million in these projects through the Public Transit Infrastructure Stream (PTIS) of the Investing in Canada Infrastructure Plan. The Government of Ontario is providing more than $33.1 million to the projects, while the City of Greater Sudbury is contributing more than $26.4 million. The funding was announced Aug. 6 at the Transit Fleet Services building on Lorne Street. The bus fleet replacement program will see 53 new low-floor 40-foot buses purchased over eight years, effectively reducing maintenance costs while providing modern, safe and reliable transit. This project  federal, provincial and municipal governments will each provide $13,767,600. Another project will see the implementation of various technological improvements, including an electronic fare payment system and on-demand services for transit users in low ridership areas. The third project will see the installation of new transportation management and communication technology, as well as the replacement of traffic signal controllers at all intersections. Full story can be found here.

City of Greater Sudbury staff is recommending that councillors approve a nearly $360,000 roof repair at the Sudbury Community Arena. The nearly 70-year-old building has some leaks in its roof that were identified by city staff back in 2018, affecting areas of the main lobby, VIP/Catering room, Eastlink broadcast area/Sudbury 5 ticket office, lower level training room and coach’s office/washroom. The south end areas (VIP on the west, and ticketing on the east) have been repaired on several occasions in the last few years, but the condition of the roof system has deteriorated to the point that they are no longer able to be repaired, and the staff report indicates that partial replacement is the only option available. More on this story here.

We are only halfway through the mosquito season in Northern Ontario, but already mosquitoes have been discovered that tested positive for the West Nile virus in Ontario. It has prompted public health officials in a couple of Southern Ontario communities (Hamilton, Alliston) to advise residents to take precautions. The disease is transmitted by mosquitoes and usually produces only mild flu-like symptoms for most people. In some cases it can result in serious illnesses such as meningitis and encephalitis, usually in older adults (50+) and those with weakened immune systems. According to Health Canada a West Nile virus infection can result from the bite of an infected mosquito, usually one that has previously fed on the blood of an infected bird. Find the full story here.

Up Here reveals muralists and guest curator for its sixth edition:

Sudbury will be getting several more splashes of colour during the summer and fall. Up Here, Sudbury’s urban art and music festival, has revealed the artists that will paint murals and hydro boxes around the city this year. The sixth edition of Up Here has been reimagined for the ongoing pandemic and will see the creation of five new large-scale murals by five local artists. The Power Up Project is also back for a fourth straight year, providing electrical utility boxes as canvasses for six more local artists. The festival will offer programming throughout the end of the summer and into the fall. Mural locations will be announced over the next few weeks through the free Up Here app now available in the App Store and Google Play. Meet the locat artists that will be creating this year's murals here.

Laurentian residence will be open under modified conditions this fall:

Laurentian University will open the doors to its residences this fall, with some adaptations made to safeguard against COVID-19. For more than 50 years, Laurentian Residences has provided safe housing accommodations for students. "We recognize many students will prefer to be on campus this fall and Laurentian University has implemented plans to provide the best possible accommodations," said a news release from Laurentian. In the interest of limiting risk, the school has taken a number of measures including reduced occupancy, staggered move-in dates and times, increased cleaning and more. Find the full story here.

A 31-year-old man from Gordon Township was charged on Aug. 2 after being involved in a motor vehicle collision on Highway 540. On Aug. 2, at around 8:30 p.m. members from the Manitoulin Detachment of the OPP responded to a motor vehicle collision on Highway 540 in Gordon Township. It was reported that the collision involved a driver that was ejected from an all-terrain vehicle and had non-life threatening injuries. With the assistance of Emergency Medical Services the driver was transported to hospital. Police continued their investigation at the hospital where officers conducted a mandatory alcohol screening on the driver which registered a "Fail" resulting in further tests. As a result of the investigation, a 31-year-old man from Gordon Township was charged with: Operation while Impaired - alcohol and drugs, Operation while impaired - blood alcohol concentration (80 plus). The accused was released on an appearance notice and is scheduled to appear before the Ontario Court of Justice in Gore Bay on Oct. 7. The driver was served with a 90-day Administrative Driver's Licence Suspension.

A mix of sun and cloud in the forecast for Friday. Warmer weather on the way as we head into the weekend. Friday's high will be 25, feeling like 28. Partly cloudy tonight with the low sitting at 13. For current weather conditions, short-term and long-term forecasts visit Sudbury.com's weather page at www.sudbury.com/weather.

Good morning, Sudbury! Here are 5 stories to start your day
Sep 18, 2020 7:36 AM
Comments
We welcome your feedback and encourage you to share your thoughts. We ask that you be respectful of others and their points of view, refrain from personal attacks and stay on topic. To learn about our commenting policies and how we moderate, please read our Community Guidelines.