A community activist genealogist? Yup, New Sudbury has one of those

Not only does Arthémise Camirand-Peterson work to uncover and preserve the history of New Sudbury, she volunteers to make its parks and pathways accessible to everyone, regardless of ability
Apr 15, 2020 12:22 PM By: Marlene Holkko Moore 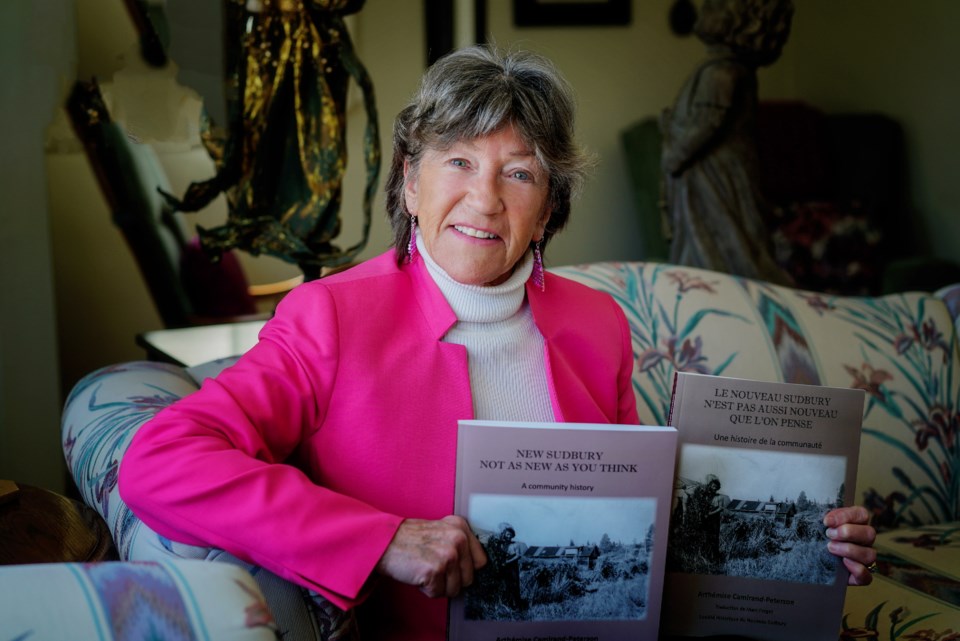 Arthémise Camirand-Peterson is a self-professed genealogy enthusiast whose love for history has paved the way for an exceptionally fulfilling life as a community volunteer.

Born and raised in Blind River, she has always been interested in her family history. “My mom was a wealth of information and I think it fed my lifelong curiosity and thirst for knowledge,” she said.

When Camirand-Peterson was eight, her father fell seriously ill, leaving her mother to raise six children and work multiple jobs to make ends meet. “Despite the hardships, my mother would help anyone who needed it. She was a hero to our family and someone who inspired me deeply.”

Camirand-Peterson began volunteering in Grade 8. “The nuns ingrained in us a strong work ethic and good morals. My classmates and I regularly visited a local retirement home to help lift residents’ spirits, especially those who had no family. Their stories enlightened me about my hometown and the residents’ memories of their lives increased my interest in my own family’s history. It led me to a 25-year search into the never-documented Camirand family genealogy.”

Volunteering from such a young age instilled a sense of community responsibility that followed Camirand-Peterson into adulthood. In her first marriage, she was a stay-at-home mom raising two children.

While the kids were in school, she escaped the daily domestic routine for a few hours by volunteering.

“In Blind River, and in every community for that matter, there are lots of places that can use a helping hand.”

Through her church, Camirand-Peterson signed up to man the phones at a local mental health crisis centre. “It gave me a sense of purpose outside the home, and it was gratifying to know I was helping others.”

Camirand-Peterson and her second husband, Bob Peterson, recently celebrated 42 years together. They have raised a blended family of four, all of whom live and work in Greater Sudbury. The Petersons are also proud grandparents of three girls.

Having resided in New Sudbury for more than 40 years, Camirand-Peterson’s love of local history has paved the way for her involvement in several new neighbourhood initiatives during retirement.

In 1993, she assisted Ward 12 Coun. Joscelyne Landry-Altmann with setting up a community action network (New Sudbury CAN) to serve the ward. The organization, chaired by Camirand-Peterson, along with newly formed Ridgecrest Accessible Park Neighbourhood Association and the councillor worked tirelessly to revitalize Ridgecrest Park on Roy Street.

“The transformation effort was inspired by a youngster who was heartbroken because leg braces precluded him from sitting on the swings. That’s when we initiated acquisition of an accessible swing for the playground.”

Today, the park’s obsolete play structures have been replaced or upgraded to comply with accessibility standards, and new structures with specific enhancements have been added. Ridgecrest now has several features that make it accessible to children and adults with mobility restrictions, while still serving the needs of all users. “The field house has a wide accessible door and ramp and two accessible washrooms have been installed. Most park field houses were built in the 1980s and they simply didn’t accommodate those barriers.”

Over the last 12 years, Ridgecrest Park has continued to improve the playground.

Camirand-Peterson chaired New Sudbury CAN for eight years, until the group’s dissemination in 2015. During her involvement with CAN, she realized that there was no preserved historical record of Ridgecrest Park from the 1960s (when it first opened) to the 1990s. With her natural curiosity and innate ability to dig up facts, Camirand-Peterson managed to investigate and document the park’s history.

But it didn’t end there. She also discovered there was no historical documentation on New Sudbury in general. That motivated this history buff to establish the New Sudbury Historical Society/Historique du Nouveau Sudbury.

Camirand-Peterson has led the society for the last decade. “I wanted to record local history for posterity, and I was very curious personally about how New Sudbury came to be. Many well-informed lifelong residents from the neighbourhood served on our board and during public meetings, residents and former residents spoke about the history of the former townships. Their wealth of information prompted me to write a book.”

Camirand-Peterson self-published “New Sudbury: Not as New as You Think” in 2015. Over the course of five years, she interviewed hundreds of people and conducted in-depth research on the colourful history of the area from the period 1884, when it supported the logging industry, to 1960 when development of major retail and prime residential real estate began.

In partnership with the City of Greater Sudbury, Camirand-Peterson has expanded her quest to promote New Sudbury’s history with the addition of 69 street sign toppers throughout the neighbourhood. She is currently working with Rainbow Routes to add historical plaques along two trails in New Sudbury so that walkers and joggers can also learn more about the area’s past.

Camirand-Peterson is living a rewarding life of volunteering that continues to fuel her passion to preserve local history for many generations to come.

“Raising a family is the most important job you will ever have and making time to volunteer in your community as a leader or an active participant will contribute to good example, rewarding benefits, friendships, community involvement and self worth.

“My involvement in my community gives me satisfaction every day, either by going for a walk and seeing the street sign toppers on top of so many stop signs and traffic controls that have been implemented, walking the trails where some of the historical plaques will soon be mounted, speaking with individuals who have read the book and hearing their personal thankful comments for the New Sudbury Historical Society.”