After their daughter’s passing, this couple began giving back to the Cancer Society 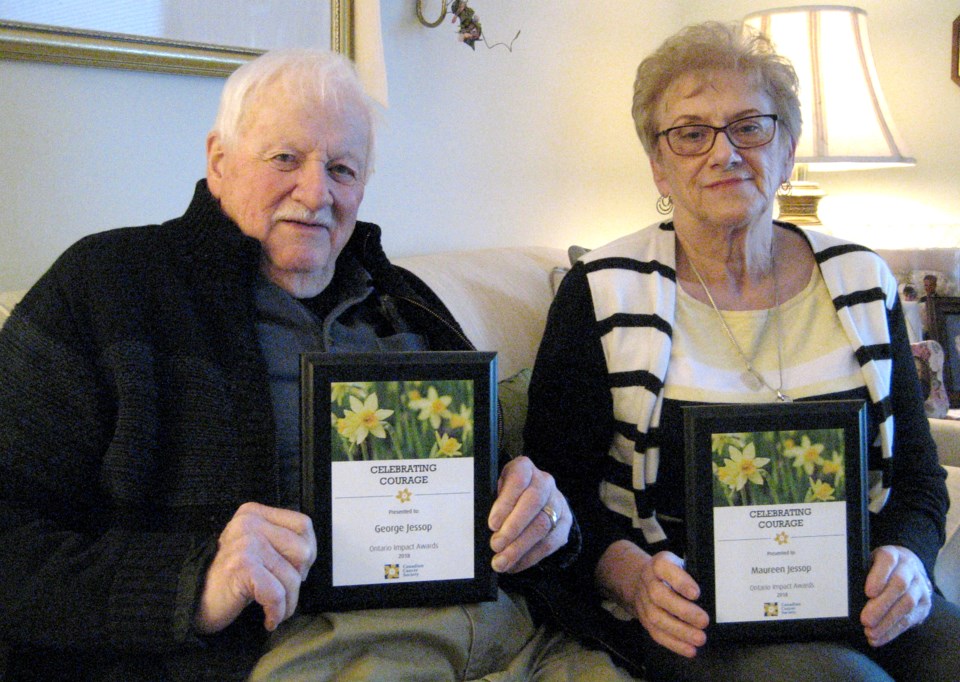 George and Maureen Jessop have been recognized many times over the years for their dedication to the Canadian Cancer Society. They hold Ontario Impact Awards honouring their indelible service after the loss of their daughter. (Image: Marlene Holkko Moore)

Maureen Jessop honours the memory of her daughter by helping cancer patients in a very special way and giving back through service to others.

Jessop was born and raised in northwestern Ontario, where her father worked as a mine shift boss and her mother was an active volunteer. She and her sister were introduced to volunteering by their mom who believed strongly in supporting community.

“Our mother was on committees that hosted church teas and organized various fundraisers, and it wasn’t uncommon for us as teenagers to help out at those events,” said Jessop, adding, “It was actually good life-skills training on how to handle responsibility and develop our self-confidence.

“We took those valuable hands-on lessons into adulthood.”

In 1970, Jessop and her first husband relocated from Geraldton to Chelmsford with their young family. When they divorced, Jessop remained in Greater Sudbury because her kids were happily settled into their elementary school, while the youngest was still a toddler at home.

“Being a single parent working several jobs was challenging, but I was determined to make it work.”

She also recognized the value in being involved in her children’s extra-curricular activities. Jessop served on the local Parent-Teachers Association and the Catholic Women’s League, and she enjoyed mentoring young girls as a Brownie pack leader. She also ensured her sons were matched with a Big Brother.

“Our family life never suffered because the kids and I were very active outside of school and work.”

One day, Jessop was in the market for a new washing machine, never thinking she would also meet the love of her life: George, the salesman who sold her the washer. They married in 1977, creating a wonderful blended family consisting of his two grown children and her five youngsters whom he subsequently adopted. Today, George and Maureen Jessop are doting grandparents of nine and great grandparents of three.

The Jessops have a close connection with cancer, which led them to a heartfelt, enduring commitment of service to the Canadian Cancer Society (CCS).

“When our 27-year-old daughter was battling Hodgkin lymphoma, our family received so much caring support through the Cancer Society. We’ve never forgotten the kindness and compassion shown to us by their staff and volunteers,” Jessop said. “After Kathleen’s passing in 1994, I knew I had to get involved somehow as a means of thanking them.”

Jessop came across a newspaper ad for drivers needed by the CCS and thought it could be her opportunity to give back. The program was a predecessor to the Cancer Society’s current Wheels of Hope initiative that provides patients with transportation to and from cancer-related appointments. She has been a volunteer driver for 21 years, while her husband has been driving for more than 15 years.

“George and I feel it’s a very personal way to honour our precious daughter’s memory.”

Jessop can’t say enough about how rewarding it is to be a part of the CCS Wheels of Hope team.

“You develop a special bond with people you drive back and forth to the Cancer Centre because there’s time to get to know one another during the trip. When you see how brave they are, it gives you an even greater appreciation for life and family.”

She describes the Wheels of Hope program as a godsend to those who have difficulty getting to their treatments and appointments.

“One thing about becoming a volunteer driver is that the commitment is based on your own schedule and whatever amount of time you can give. That could be anywhere from a few hours at a time, to a few trips in a week or month.”

If you’re someone who has free time, or if you’re retired or a senior, don’t be hesitant about exploring opportunities to volunteer. For one thing, it gets you out of the house maybe one or two days a week. You’ll be doing something personally rewarding and helping people who can use a hand. No matter how you get involved, volunteering improves your life and the lives of those you help.

Keeping her daughter’s memory alive has raised nearly $1M to fight cancer
Oct 14, 2020 12:00 PM
Comments
We welcome your feedback and encourage you to share your thoughts. We ask that you be respectful of others and their points of view, refrain from personal attacks and stay on topic. To learn about our commenting policies and how we moderate, please read our Community Guidelines.