Meet Mary Guy, who both lives with the movement disorder dystonia and volunteers her time to raise funds and offer support to others living with the condition
Sep 2, 2020 12:00 PM By: Marlene Holkko Moore 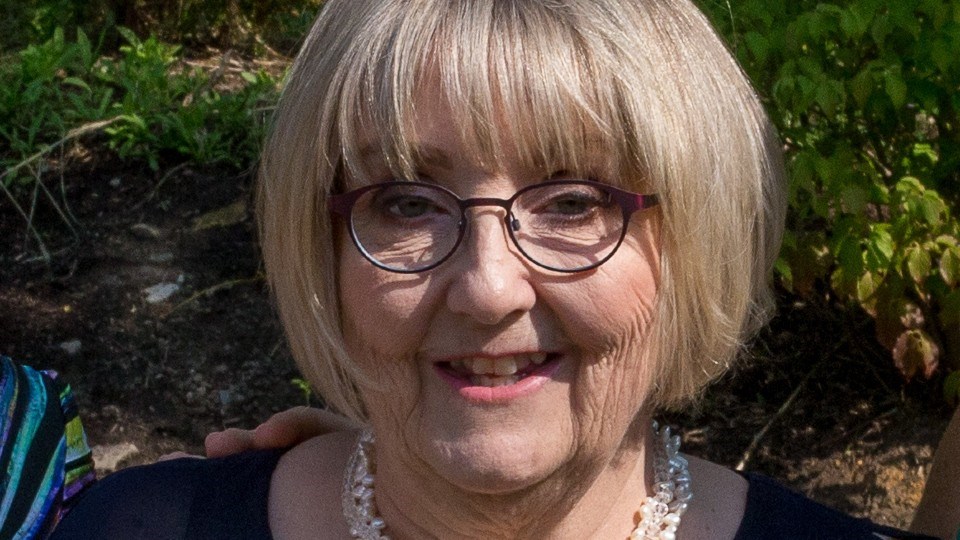 Mary Guy emphasizes that anyone who suffers from a rare medical condition is the person best equipped to help build public awareness and understanding about that illness. Photo supplied.

Mary Guy was born and raised in southern Ontario, the second of five children to Norman and Dorothy Pearsall. She lived in the Scarborough area until she married and relocated to Sudbury.

“My father worked his way up to be the manager of the data processing department at the then Manufacturers Life Insurance Company in downtown Toronto,” she said. “My mother was a stay-at-home mom.”

Mary attended York University, where she would meet her future husband, Richard Guy. Richard studied English at the University of Toronto, wrote the LSAT after his second year (for practice) and, much to his surprise, was accepted into Osgoode Hall Law School. Mary earned a B.A. in mathematics from York, followed by a Bachelor of Education from U of T.

Born and raised in Greater Sudbury, he always intended to return north after passing the bar. That goal came to fruition in 1974 when he came home to establish his own law practice.

Guy launched her teaching career at Agincourt Collegiate Institute. When she and her husband relocated to Sudbury, she accepted a position teaching math at Nickel District Secondary School. During her four-year tenure, Guy was in charge of the school’s student council and in her last year became assistant head of the math department. She also taught summer school for a couple of terms.

Within six years, the Guys became parents of four.

Jennifer, the eldest, is a senior partner at ORP Law. She and her husband, Derek, a lawyer at Justice Canada, live in the west end of Toronto. They have three daughters, all of whom play rep hockey and rep baseball.

Allison, who earned an M.Sc. in neuroscience at U of T, works as a director of regulatory affairs in oncology for the Swiss-based pharmaceutical company and pioneer in health care, Roche. She is married to Costin, an associate professor in the Department of Biology and Chemistry at Ryerson University, where he studies cancer and, more recently, COVID-19. They live in Mississauga with their two sons who, like their parents, are committed to an active lifestyle.

Mary Bess has been an elementary core French teacher with the Rainbow District School Board since 2004. She is also a member of the IODE City of Lakes Chapter. Married to Sami, a pharmacist, they have a daughter involved in pre-competitive dance and a young son who primarily plays hockey and baseball, which Sami helps to coach.

Adam, the Guys’ youngest, graduated from engineering at U of T and then went on to earn a Masters of engineering in public policy at McMaster University. He works in hospital administration as the lead, strategic initiatives and partnerships at St. Joseph’s Healthcare Hamilton, Ontario. His wife, Aisling, is senior communications officer with the City of Hamilton. When the global health pandemic hit, she was on maternity leave with their first child, a son.

Just as her children have been involved in their communities, volunteering has been an important part of Guy’s life since childhood.

As a youngster, Guy was in a choir of eight girls. They sang at Sunday mass, as well as at special occasions. “That experience taught me about teamwork and how to be responsible. Our choir was reliable and always showed up to practise and perform.”

Another valuable childhood volunteer opportunity was participating in Brownies and Girl Guides, where Guy earned a position as patrol leader of her troupe.

When she became a mom, her four toddlers kept life extremely busy, at least until they were school-aged. “Our kids attended Montessori school. Up to that point, I kind of lost myself as a stay-at-home mom because I wasn’t exposed much to the community.”

With all her children attending Montessori, Guy saw an opportunity to rebuild her social network and remain involved by volunteering at their school. She was a committed member of the board, initially responsible for membership, then serving as president for several years. To gain confidence in running meetings and dealing with parents she took a Dale Carnegie course. Guy redid the course as a volunteer by calling attendees to make sure they had their talk ready, helping them if they did not, encouraging them and then conducting demo talks in class.

“I became a Dale Carnegie Instructor. Volunteering brought me out of my shell and challenged me to do things that I had never done before.”

Guy also enjoyed helping at her girls’ dance studio. She exercised her organizational skills co-ordinating dance-a-thons and tag day fundraisers as part of her role as board president. “It was really rewarding. Quite a few of the mothers were involved.”

Over the last 25 years, Guy has taken on new volunteer challenges, one being rather unexpected.

In 1995, she displayed symptoms of dystonia, a disorder where a muscle (or a series of muscles) spasm or contract involuntarily. After almost two years of consultations with medical specialists in Sudbury, Ottawa and Toronto, Guy was officially diagnosed with a focal dystonia called blepharospasm, which caused her eyes to blink uncontrollably. It has progressed over the years, affecting her jaw, voice and neck.

There are several types of focal dystonias affecting different parts of the body and most can be managed with Botox injections and drugs. The most devastating kind of this neurological disorder is generalized dystonia. It usually occurs in children, starting with the foot turning in and the child tripping a lot. Then come the spasms and debilitating pain, and the child is destined to a wheelchair. The only recourse is deep brain stimulation (DBS) surgery, which has been quite successful but is not risk free.

In 1995, not much was known about dystonia, but efforts continue to build public awareness about the condition and fundraisers across the country support ongoing research into its control and possible cure.

Soon after diagnosis, Guy discovered there was interest in forming a support group and, to this day, the Dystonia Support Group of Sudbury and District hosts an annual walk-a-thon to raise money and awareness. Guy became president of the local organization and never hesitates to commend those who have been so helpful over the years.

“Gerry Chenier organized the first three walks before I took over the role. Over the years, Linda Thompson has taken charge of food and refreshment donations while her husband, Harry, delivers their BBQ to the event along with plenty of door prizes. Len Shymkiw takes charge of barbecuing. The Rainville clan has been donating two big baskets of fun stuff for the kids’ door prizes. Brenda Morris, Lise Depatie and Sue Leroux supervise the registration and collection of donations.”

“I have a ‘jobs list’ for the day of the walk so that when participants arrive, they can choose how to help get the event set up.”

“Over the years, Dwayne Backer has brought in more monetary contributions than anyone I know. Dwayne challenges himself to surpass the previous year and always succeeds. He and his wife, Pauline, are very dedicated to the cause.”

“We’re so fortunate to have strong community support. Many years ago I joined with other dystonia leaders to attend Parliament Hill to advocate for dystonia. I met personally with MPs Diane Marleau and Ray Bonin to educate them about dystonia. At a meet-and-greet that followed, we met with senators and members of parliament to educate them about dystonia and the need for funding for research. It was really an exciting and interesting experience, which I was able to share with my daughter, Allison, who was working in Ottawa at that time. You never know where volunteering will lead you.”

For more than three decades, Guy has helped organize, promote and host the organization’s very popular annual Tour of Homes.

“Many people face obstacles that nobody is solving — when IODE sees a need in the community, it tries to fill it. Recently, we provided funds to allow each student at three elementary schools to buy a book from the Scholastic Book Fair. For many children it was the first time that they had owned a book.”

In 2012, Guy was the recipient of the YWCA Women of Distinction Award for her dedicated volunteer efforts to dystonia and the IODE.

“I’m so thankful to my husband for supporting my passion for volunteerism. He worked very long hours in a demanding career, which allowed me more time to dedicate my efforts to projects in the community.”

"In school, we were always taught by the nuns that everyone has a personal obligation to give back to the community, and that we can develop important skills and be leaders in our communities while helping others. If you suffer from a rare medical condition, remember that you are the one who is best equipped to bring attention to the illness by increasing public awareness and understanding. Take what you really enjoy doing and see how you can creatively fit that activity or skill into volunteering. In my case, I love photography, so I create greeting cards from my photos. On the back of each card, I’ve added the dystonia logo to build public awareness. For the Tour of Homes, I take pictures in each home and provide them to the media to promote the tour. I’m also a bookkeeper so I have been the treasurer for our IODE chapter for many years. Volunteering gets you out of the house and you’ll meet people who inspire you and share common goals and interests. Giving back, you get a lot back in return."