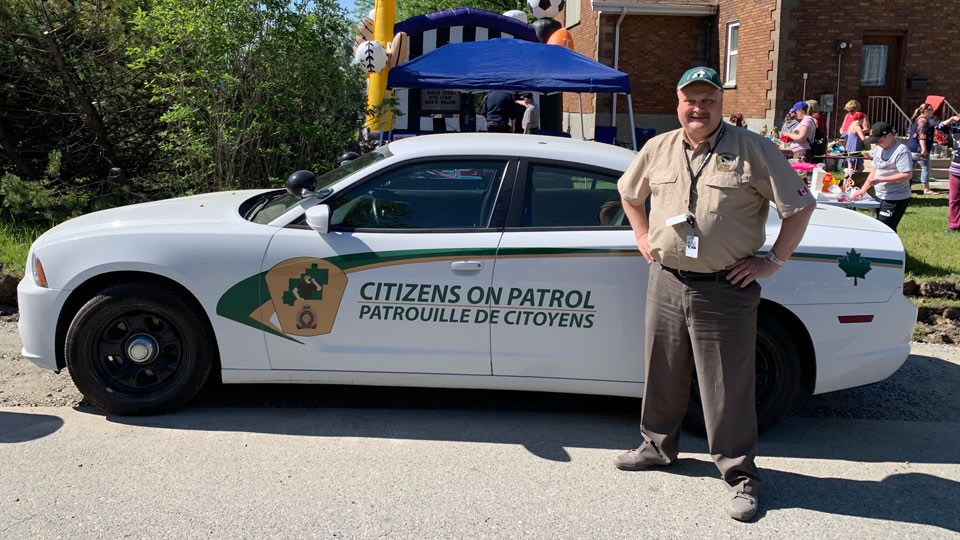 Theo Reed with the COPs car in Copper Cliff. (Supplied)

Originally from Cornwall in South West England, Theo Reed emigrated to Canada in his mid-twenties with his first wife.

The young couple settled in Québec, where Reed established a recycling business in the village of Ayers Cliff.

His next step was a move to Ontario on his own, where he launched a career with Combined Insurance of America.

Reed has operated his insurance practice for 29 years, initially in the Ottawa Valley and, for the last 15 years, in Northeastern Ontario.

Reed met and married his wife, Sherry, a decade ago.

“I remember when we were dating, she told me she’s a foster parent and if I couldn’t accept that, our relationship couldn’t move forward,” he said. Having no children of his own, Reed was more than willing to accept that.

“I was raised in a big family by loving, compassionate parents, so it wasn’t a stretch for me to reach out and support kids,” Reed said.

In England, Reed grew up one of eight children on a small dairy farm. “We harvested our own food and kept a herd of 10 cattle,” he said.

Although his father was employed as an accountant, his salary wasn’t enough to support such a large family. “To supplement dad’s income, my parents hosted summer guests, much like today’s bed-and-breakfast operators,” he said.

From an early age, Reed and his brothers and sisters learned the importance of giving back to community. Volunteering was something the Reed children learned early on.

“My biggest mentor was my mother,” he said. “She helped out at the local food bank and donated a lot of our homegrown foods to the underprivileged.”
Reed’s mother was a true altruist, a generous person through and through.

“I remember she offered a gay couple from a nearby village a place to stay when everyone else scorned them,” he said. “Without hesitation, but with grave criticism from neighbours, our family also took in someone suffering from HIV when no one else would give them the time of day.”

Reed inherited his parents’ compassion and desire to help others.

Over the years, Theo and Sherry Reed have been dedicated foster parents to nine children and youth.

“So many kids in foster care are burdened with a family history of drug abuse, physical and emotional abuse,” he said. “They may have special needs or are experiencing an identity crisis, without a caring adult to support them.”

Reed has been involved in several organizations since coming to Canada 32 years ago. In his adopted home of Copper Cliff, he got involved with the Greater Sudbury Police Services (GSPS) Citizens on Patrol (COPs) program in 2017.

“I was interested in doing some community work and thought about the prospect of volunteering with the police service,” he said. “In fact, as a teenager, I had tried to get into policing but wasn’t old enough to join.”

While visiting a Volunteer Sudbury / Bénévolat Sudbury information fair at the New Sudbury Centre, Reed learned more about neighbourhood watch and the COPs program, and he signed up to become a community volunteer with COPs.

“I saw it as a perfect opportunity to realize my childhood dream of helping keep communities safe,” he said. “And, being self-employed, I also appreciate that the hours are flexible to suit my work schedule.”

He is also very involved on the education side. “We have a booth at the annual classic car show here, which is a great way to reach out to the community about the important work done by COPs and the GSPS,” he said.

“Al epitomizes what it means to be community-minded and get things done,” he said. “He encouraged me to join forces with Citizens on Patrol to help clean our neighbourhood as part of the City of Greater Sudbury Annual Clean Up Blitz that happens in the month of May.”

It was a natural choice to become involved. In 2011, in conjunction with Combined Insurance, Reed had initiated an Adopt-a-Road program on Balsam Street.

“Many communities across the country have this type of volunteer service in place,” he said. Residents, businesses and organizations help clean up the environment in their own neighbourhoods.

According to Reed, “Anyone can do this. Wherever you live, commit to cleaning a specific street. I take care of two streets in Copper Cliff. It’s only a couple of hours’ work every April and October, and we’re helping to keep our town beautiful and healthy.”

When Reed learned a few months ago that Meals on Wheels Sudbury was in dire need of drivers, he immediately signed up. The organization helps people remain independent by offering services to those unable to grocery shop or cook for themselves.

“My route takes under two hours, so I can easily manage a couple of shifts a month,” he said.

Delivery hours are typically between 10:15 a.m. and 1 p.m. “Meals on Wheels understands that volunteers have busy lives, so there’s no commitment required to do a minimum number of shifts. You can volunteer as many days per month as you wish.”

Theo and Sherry Reed encourage Greater Sudburians to think of others as well as themselves. “The world is going through a tough time so it’s even more important to remain positive and be thankful for what we have in life. Helping others is a rewarding way to demonstrate your gratitude.”

Volunteering is not just a word, it’s your state of community spirit to reach out to those in our society who are less fortunate than ourselves.

With the current and unprecedented global pandemic that necessitates everyone self-isolate, we must all maintain a positive mental attitude and a state of mind that continually seeks, discovers and executes ways to win, regardless of the circumstances. Take stock of what you have and be thankful.