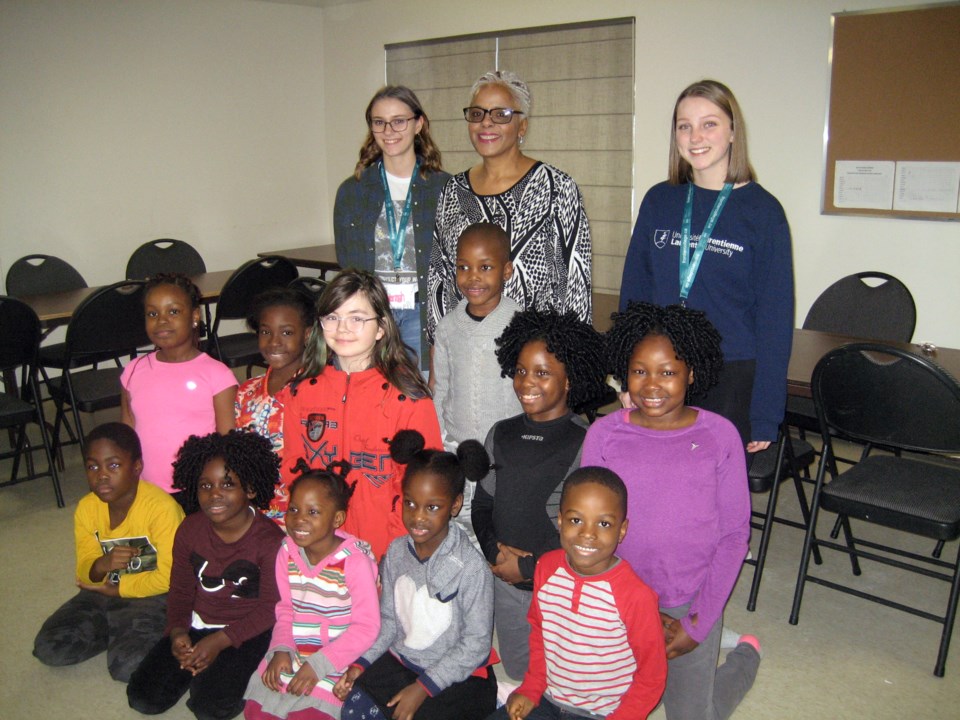 Many families have immigrated to Greater Sudbury from other countries. Among many neighbourhood initiatives she has helped create, June Davis (centre), a.k.a. “the Mayor of Louis Street”, and her volunteers lead after-school programs where neighbourhood children can continue learning and reading to build their skills and self-confidence. (Image: Marlene Holkko Moore)

Affectionately known as “the Mayor of Louis Street,” June Davis is fiercely proud of the area where she was raised. And, as a long-time resident of Louis Street, she has earned a place in peoples’ hearts for her dedication to the well-being of the neighbourhood.

That lifelong passion began in the mid-1960s, when Davis was just a child. The Byard family left the East Coast for Northern Ontario, her father happy to find work in the mines of Sudbury. One of 12 children, Davis was six years old when her family settled into a home in the downtown’s Borgia block. That was, however, rather short-lived as the Borgia was demolished in the late 1960s to make way for the City Centre Mall (today’s Rainbow Centre). Displaced Borgia residents were relocated to houses and apartment buildings constructed on Louis Street.

By age 30, Davis was a widow raising three young children on her own. After working for many years at the former General Hospital, she moved to Alberta, but when her aging parents became ill, Davis returned to Sudbury to help care for them. Not only did she return to Greater Sudbury, she returned to Louis Street and has resided there ever since.

“I’ve come full circle back to a neighbourhood I’ve loved since childhood,” she said.

But upon her return Davis wasn’t happy with how things were in the Louis Street area.

“It just wasn’t what I remembered as a child. I was upset by the drugs and violence we frequently witnessed in the neighbourhood. That’s when I took action to instigate change and work toward erasing the negative stigma,” she said. “I just didn’t want my three kids growing up in that kind of atmosphere.”

Rather than simply accepting the situation, Davis decided to take action. For more than a decade now, she has worked tirelessly to help reverse the negative reputation of the area.

The Louis Street Association is a thriving group of active volunteers who are dedicated to positive change and working together to create a strong, vibrant neighbourhood. Davis has led the way by engaging the city, local police and community agencies in open dialogue and developing proactive plans to improve life in a tough neighbourhood.

“We discuss possibilities and approaches to change, and we take action to realize those positive changes.”

For the association, that has meant getting residents involved in community activities and enlightening them about opportunities.

“For example,” said Davis, “we established a safety promotion committee, where Louis Street residents have a forum to talk with police about issues our neighbourhood faces. It’s important for those concerns to be heard, and to advocate for our future.”

Davis’ efforts have also led to many other initiatives, including a community garden.

“We started off with a donation of four garden boxes that yield fresh vegetables for everyone in the neighbourhood. By this coming spring, that number will have expanded to 18 boxes.”

Residents and their families have really benefited from growing their own food, and many newcomers to Canada have even planted foods from their homeland.

“This is all part of our neighbourhood beautification effort and it really does bring us together as a diverse, inclusive and welcoming community.”

After-school programs are also in place to give the kids a place to do activities, play and learn together.

“It helps keep them off the streets or getting into trouble,” said Davis. “They enjoy organized events like an annual Easter Egg Hunt, fishing excursions, Christmas festivities and art projects.”

Young and old alike also take part in a regular clean-up of Louis Street and Mountain Street as part of their commitment to community improvement.

“All this helps our kids grow up with a strong sense of community and respect for the environment. We’re building character and confidence in them and hope for a bright future. I believe we’re not only effecting positive change, but we’re making Louis Street unique. I hope it inspires others to do the same in their own neighbourhoods.”

“Everyone has a little part of them inside that has the ability to change their community for the good. In the bigger picture, every little bit of effort makes a difference.”