Sharon Beck is a lion of a volunteer

‘Your volunteer heart opens when you give your time to an organization’
Oct 7, 2020 12:00 PM By: Marlene Holkko Moore 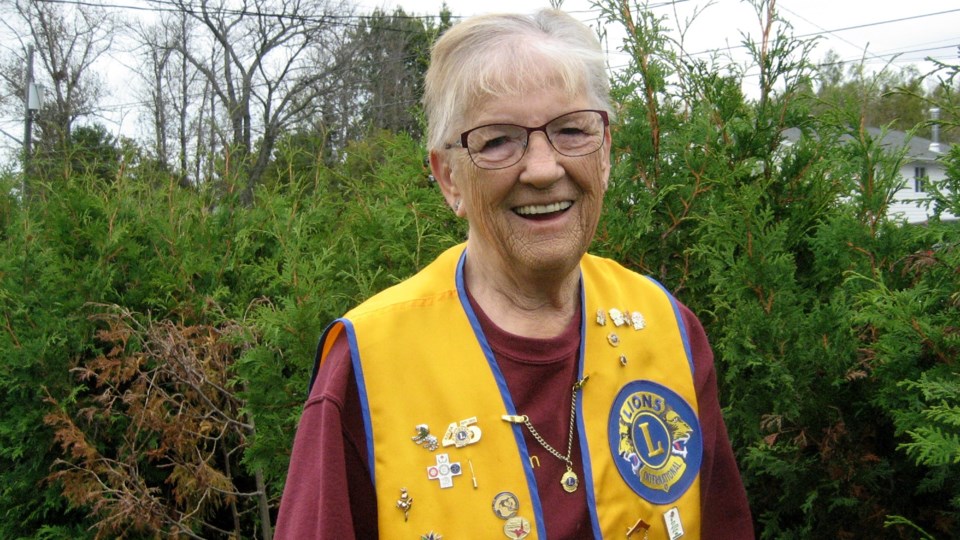 Sharon Beck is committed to family, friends and community, and she believes those relationships are only strengthened through a commitment to volunteerism.

The daughter of an Irish immigrant father who drove truck and a Canadian-born mother who worked as an executive secretary, Beck grew up in the Toronto area. The family moved so frequently that she and her two siblings started a different school almost every year.

“As a result,” said Beck, “we kids didn’t keep friends for very long.”

Although they started off married life in southern Ontario, within a year or so, the young couple was able to purchase a home in Callander, a few kilometres south of North Bay.

“Moving from place to place so much as a child, I hadn’t made any lasting connections, but when my husband and I settled in the North, all that changed. Today, I’m blessed to have many long-time friends, including Janet, my BFF for more than 50 years.”

In 1974, the Vivian family relocated from Callander to Sudbury. Their kids were in school by then, so Beck launched a career at Tim Hortons in the city’s South End.

“I worked at the Algonquin Road Timmies for over 15 years. When I retired in 2008, some of my colleagues had worked at that location for 30 years or more. Many of them have remained good friends.”

The Vivians have a son and daughter.

Tracey, 53, is a mental health consultant at Waypoint Centre for Mental Health Care in Penetanguishene, about 300 km southeast of Sudbury. She and her ex-husband, Trevor, have two sons. Thomas is 22 and Cole is 20. “My daughter is a front-line worker and, like so many, her role expanded exponentially with the pandemic. I’m very proud of her dedication to others.”

Glen, 51, moved to Hawkesbury, about 100 km east of Ottawa, some eight years ago for his job as a process engineering manager in a shingle manufacturing plant. After a medical diagnosis last year and early retirement, Glen returned to Sudbury this September to be near the Northeast Cancer Centre and to be close to family.

Separated for the last 22 years, Beck resides in Val Therese and her husband lives in the French River area. “We’ve remained friends because we both believe in maintaining a strong family unit.”

Beck delved seriously into volunteering when her young daughter joined Brownies. It was a way to be involved in their common interest.

“First, I became a Brown Owl and Pack Leader. Then, when Tracey decided not to go forward and become a Girl Guide, I was the one who continued with Guides.”

Beck was soon leading a division, then training girl guide leaders and heading the district commission.

“Thanks to my daughter’s involvement in Brownies, I found my niche with Girl Guides of Canada.”

Beck was a dedicated volunteer with the organization for 15 years.

After she left Guides, Beck stepped away from volunteering for several years. And, in retirement, she had gone into “a kind of hibernation”, focusing on her home and her large gardens.

“I was kept pretty busy at home, but with my kids and grandkids living out of town, I missed the everyday interaction I had with people.”

That feeling dissipated when her tenants — a mother-daughter team who were Lions Club members — asked if Beck would like to lend a hand with their fundraiser, a spaghetti supper.

“Phyllis and Sandy were not only my tenants; we had become dear friends. I enjoy cooking, so helping out was an easy decision. That first experience with the Lions was wonderful. I felt so welcomed that I asked if I could join the organization.”

That was five years ago. Today, Beck is an active member of the Azilda Lions Club.

She has served as secretary of that branch for the last three years, and has since come on board as secretary to cabinet for the Northern District. There are more than 50 Lions Clubs in Northern Ontario, stretching from Moosonee to Sault Ste. Marie.

“Getting involved with the Lions was a real pick-me-up. Unfortunately, my flower beds have had to take a back seat!”

The pandemic has been rough on almost every not-for-profit organization, and Lions clubs are no exception. “The annual Hockey & Jug Curling Tournament is one of our major fundraisers supporting the charitable work we do, but this year’s event had to be cancelled.”

In late spring, however, the Azilda Lions Club was approached to partner with Dwayne Brown in putting on weekend fish fry events throughout the summer.

“Dwayne’s generous offer helped us pay the bills and keep our club running. We were so sad when he passed in August. He was a good friend to the Azilda Lions.”

Beck also belongs to the Royal Purple. She serves as their treasurer.

“Phyllis is president and her daughter Sandy is also a member. I help sell Dream House tickets and have thoroughly enjoyed my time working the charitable bingos. Funds we’ve raised support our community — in particular, children and seniors.”

Royal Purple is a quiet but powerful club made up of women who are totally dedicated to community work and helping anyone who needs a hand.

“Oftentimes, families have to travel to Toronto for their child’s medical appointments and our organization’s support has helped defray the costs of accommodation and meals.”

The Sudbury Royal Purple Lodge 148 has been active in this community for several decades. Being so busy and not a large group to begin with, members have sincerely appreciated the assistance received through the efforts of Volunteer Sudbury.

“They have connected us with volunteers who helped at our fundraisers. Many were Cambrian and Laurentian students. It was so kind of them to come on board as event volunteers.”

Beck believes that people volunteer from the goodness of their hearts.

“Charitable organizations simply could not carry on without their generous spirit.”

I encourage everyone to explore volunteering and search for an organization that has special meaning to you. You will get far more in return than you give. The support is truly reciprocal. When you are a volunteer, there are so many friendships to be formed, not only locally but around the world. I could move anywhere in Canada and know that I would be welcomed by members of the Lions Club or Canadian Royal Purple. It’s an acceptance and special connection you rarely find. Volunteering is an excellent learning experience. I never imagined being qualified for leadership with the Girl Guides, but the training and mentorship I received gave me the confidence to coach and encourage others. Your volunteer heart opens when you give your time to an organization.