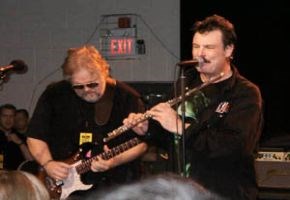 Randy Bachman and Burton Cummings, who can honesty say they are rock &#39;n&#39; roll legends, are expected play hits all night long when their The First Time Around Tour plays Sudbury Tuesday June 20.

There are still tickets available at the Sudbury Arena box office. They are $54.

Bachman and Cummings&#39; 17-stop, all-Canadian run started June 3 in Victoria and features The Guess Who and Bachman Turner Overdrive classics, plus a selection of solo works from both performers.

In the days before radio stations had to play Canadian content, The Guess Who were the first Canadian band to make it on rock charts in the mid-1960s.

The Winnipeg band had hits such as These Eyes, Laughing, and American Woman. Later Bachman had a successful career with Bachman Turner Overdrive and Cummings had several solo hits.
&#160;
The Guess Who reunited for tours in 1983 and 1985, and in 1999 they reunited to perform at the Pan Am Games in their hometown. That appearance was so successful that a year later they embarked on a national tour in 2000 that was followed by a live double-CD.

Bachman hosts a CBC radio show, Vinyl Tap, every Saturday. He played an unplugged gig at Northern Lights Festival Boreal in Sudbury a couple of years ago, and has developed an interest in jazz.

Watch for a review of the concert Wednesday at NorthernLife.ca.

Sudbury families are painting their windows in solidarity — send us your pics!
Apr 1, 2020 2:45 PM
Comments
We welcome your feedback and encourage you to share your thoughts on this story. We ask that you be respectful of others and their points of view, refrain from personal attacks and stay on topic. To learn about our commenting policies and how we moderate, please read our Community Guidelines.