Local band The Puckhogs may not have won the CBC Hockey Night in Canada Song Quest contest in early 2014, but that doesn't matter to them much.
Oct 16, 2015 10:37 PM By: Heidi Ulrichsen 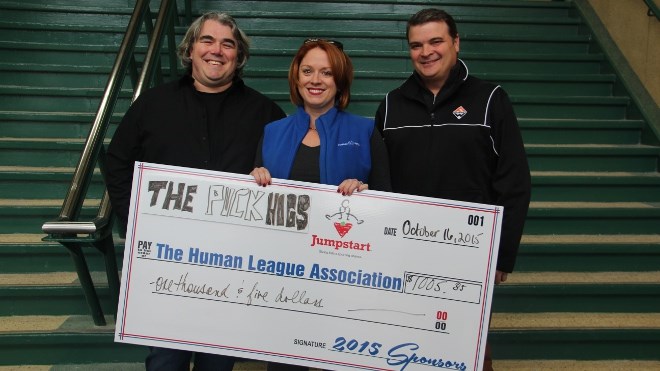 The Puckhogs brought in more than $1,000 for The Human League Association's PLAY program through downloads of their song, “For the Love of the Game.” Fisher Wavy matched the funds, bringing the total donation to more than $2,000. From left are Puckhogs member Sean Barrette, Human League volunteer Leanne Lavoie and Puckhogs member Chris Leblanc. Photo by Heidi Ulrichsen.

Local band The Puckhogs may not have won the CBC Hockey Night in Canada Song Quest contest in early 2014, but that doesn't matter to them much.

The musicians — who ended up as the Song Quest runners-up for their tune, “For the Love of the Game” — say what's happened since has meant a lot more than winning that contest would ever have.

The group — made up of Greater Sudbury musicians Sean Barrette, Chris Leblanc and Brent Wohlberg — then made the song available for download on Bandcamp for $1.

The musicians were hoping to use the song to raise $5,000 to help local kids in need join organized sports programs through The Human League Association of Sudbury.

But nearly two years later, the song had only raised about 10 per cent of its goal, or about $500. So last month, The Puckhogs decided to take one last kick at the can, encouraging people to purchase the song.

The result? The group brought in $1,005.85 through their song sales. Leblanc's employers, Fisher Wavy, then matched the donations, bringing them to a little more than $2,000.

Barrette said all of the band members are parents, and it's hard for them to imagine what it would be like to have to say no to their kids if they wanted to play a sport because of lack of money.

“Somebody's going to get to say yes because of this, and that makes us feel great,” he said.

The Wallace family, who own Fisher Wavy, are well known locally for their charitable efforts, said Leblanc.

“They're very generous,” he said. “They're great people, a great company to work for. I was proud that I was able to arrange for this extra money. It's going to a great cause.”

Human League volunteer Leanne Lavoie said the funds will be used to enrol eight children in hockey through the charity's PLAY program.

She said the Human League assisted 425 children last year, but received requests from 600. This year, the group has already helped 500. “We're nearing the very, very end of the funds that we have in the bank,” Lavoie said.

That's why the donations made possible by The Puckhogs mean so much.

“What they've done today for some local kids is such an excellent example of the type of community we live in,” she said. “They saw a need, and they just rallied together.”

To donate to the Human League, visit humanleaguesudbury.com.