Celebrating paganism with a winter solstice

A solstice is the celebration of the sun’s rebirth. Every year, Sudbury’s pagan community celebrates a summer and winter solstice, noting the longest and shortest days of the year.
Dec 15, 2010 6:42 PM By: Jenny Jelen 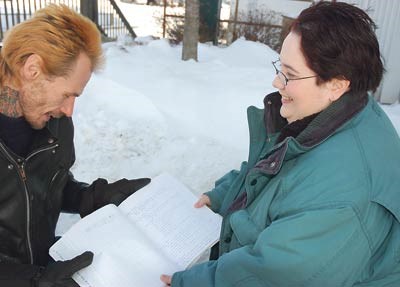 Nicolaas Gillingham and Kristan Cannon-Nixon look through the Book of Shadows as they prepare for the winter solstice, a pagan gathering celebrating the sun’s rebirth Dec. 19 at O’Connor Park. Photo by Jenny Jelen
A solstice is the celebration of the sun’s rebirth. Every year, Sudbury’s pagan community celebrates a summer and winter solstice, noting the longest and shortest days of the year.

Kristan Cannon-Nixon, one of five organizers who helps run both annual events, said its a way for pagans of all denominations to celebrate their beliefs together, and celebrate the shifting of seasons as it’s happening.

She said it’s “absolutely beautiful” that people who hold varying beliefs can get along at one celebration.

Nicolaas Gillingham, one of the other organizers, said pagans commonly practise their religious beliefs in secret, but gatherings like this help them meet others who share their ideologies and develop friendships with them.

Cannon-Nixon said “the main law” of the faith is commonly called the Wiccan Rede, which states “And it harm none, do what thou wilt.” Gillingham said it translates to “do not harm others (or yourself), and do as you will.”

Although there are many “preconceived notions” about paganism, Cannon-Nixon and Gillingham said most of them aren’t true.

“We don’t believe in the devil,” Cannon-Nixon said.

She said they do believe in balance, and since paganism is a “nature-based religion,” environmental issues are important.

The winter solstice is a pagan tradition that predates Christian beliefs, according to Cannon-Nixon. “It’s basically a New Year’s (celebration) and the Christian Christmas all rolled into one.”

She said when Sudbury’s pagan community and others interested in their beliefs gather on Dec. 19 at O’Connor Park, the evening will begin with a potluck dinner.

She said feasting together is an ancient tradition.

Following the meal, a ritual takes place, where pagans gather in a circle to pay “respect to the gods.” Cannon-Nixon said the ritual allows pagans to give thanks for the good things in their lives.

After the ritual, the group will have the chance to participate in “pagan caroling” around a fire, and have the chance to take part in a gift exchange. There will be activities for children, and some local “pagan-friendly” vendors will be set up, too.

Cannon-Nixon said most pagans wear “ritual clothing” to the celebration, which is typically an outfit they wouldn’t wear on a day to day basis.

The winter solstice isn’t just for pagans either. She said anyone who wants to know more about their religion is welcome to attend the solstice. For more information, visit Pagans of the North on Facebook, or phone Cannon-Nixon at 705-673-9369.