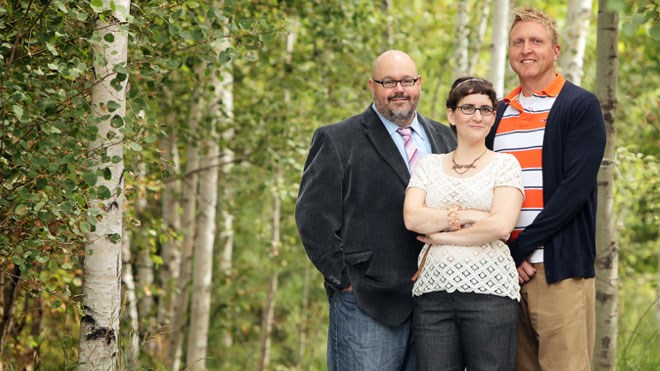 The founders of Copperworks were the driving force behind the creation of Music and Film in Motion (MFM), but left to start their own company.

“We are incredibly proud of the role we played in the development of the film and TV production industry in Northern Ontario,” said Copperworks team member Dennis Landry, in a press release.

“When we formed Copperworks, we decided only to consider playing a role in the sector if we could make a meaningful contribution. We have been having ongoing conversations with our industry colleagues and found that there was a gap in the service offerings in our city.

“For us, it has always been about partnerships in all parts of our business. The right partnerships at the right time — that’s what created this new opportunity.”

The space offers everything a production would require in an office space.

“The idea is to create an offering that is completely turnkey so a production can walk in the door, open their laptops and start working,” said Mike Large of Copperworks.

“We’ve taken care of the phones, the Internet, the copier – just pour a coffee and get to work.”

The space is booked until the end of August, housing two productions – a feature film entitled “Esc” and the new season of the TV series “Hard Rock Medical” produced by Ottawa company Carte Blanche Films that has shot multiple TV series in the Greater Sudbury area over the years.

“Our goal as producers is to find partnerships that benefit both parties, and working with Copperworks we are able to achieve that,” said “Esc” producer Jason Jallett.

“They have created a clean, professional and turnkey space to service a niche in Sudbury's film and TV sector. This type of operation creates value and efficiencies for productions, and allowed us to show up, plug in and get to work. This is a huge benefit to producers in the region.”

"The need for a facility like theirs, catering to the needs of producers such as myself, absolutely exists in Sudbury,” said Tracy Legault, executive producer at Carte Blanche Films.

“For Carte Blanche, the ability to have a home in the North allows us to focus on production and not sourcing out office space, equipment and services. We have a long relationship with the Copperworks team and their knowledge of the industry in Northern Ontario gives them a unique ability to serve producers coming to the region.”

For more information on the space, including photos and floor plans, visit www.copperworksconsulting.ca.