Carte Blanche Films, the production company behind Météo+, has been filming in Greater Sudbury again.
Feb 7, 2011 5:37 PM By: Jenny Jelen 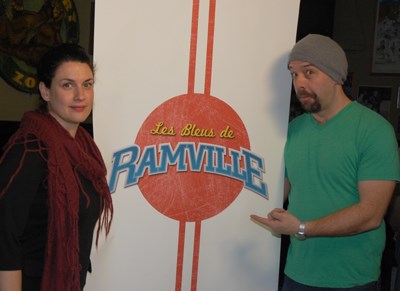 Cast and crews have been working in Chelmsford, Azilda, Garson and downtown Sudbury to film Les Bleus de Ramville, a drama about a fictional hockey team's fan club.

“We wanted a more realistic look with a small-town feel, and shooting on location offers the opportunity for the local community to be more involved in the process,” Tracy Legault, executive producer, said.

Filming for the three-season francophone series began in October 2010. So far, the first five episodes have been completed. Ten more will still be shot for the first season.

Legault said about 70 per cent of the crew is from Greater Sudbury. About 500 local extras will have also been hired by the time the first season is completed.  Many people who were trained for Météo+ have been rehired for Les Bleus de Ramville.

One of those rehired is Stéphane Paquette, who plays Gordie Turcotte in the series. Paquette's character was drafted to the Montreal Canadiens, but never played a game with the team. He eventually moved back to his hometown, Ramville, which is a fictional community somewhere between Sturgeon Falls and North Bay. Paquette said his character is “very content being a used car salesman” in Ramville, but his wife longs for big-city life again.

A musician by trade, Paquette said he has enjoyed acting in both Carte Blanche productions. The Chelmsford native who now lives in Hanmer said he was a goalie on AAA hockey teams in his youth, and hopes he can lace up his skates in upcoming episodes.

After watching footage from the series for the first time at a press conference on Feb. 7, Paquette said he was impressed.

“This is being done is Garson, Chelmsford and Azilda,” he said. “It doesn't have to come from big cities to be good.”

Miriam Cusson, a graduate of Laurentian University, also has a main role in the film.

The first episode of Les Bleus de Ramville will air on TFO in January 2012.

For more information about the series, visit www.ramville.tv.