Growing up gay in Sudbury

BY HEIDI ULRICHSEN When Jamie Solomon was attending high school a few years ago, he was called a "faggot" and other hurtful names. He was the only openly gay student at his school, and a target for bullies.
0
Jul 18, 2006 7:16 PM By: Sudbury.com Staff 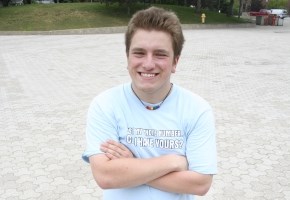 Jamie Solomon was bullied in high school because of his sexual orientation. Although he attended the flag-raising ceremony for Pride Week 2006 at Tom Davies Square Monday others are not so open about their lifestyles.

When Jamie Solomon was attending high school a few years ago, he was called a "faggot" and other hurtful names. He was the only openly gay student at his school, and a target for bullies.

"There was a lot of gay people there (at my high school), but I was the only open one. I was getting abused and verbally attacked by everyone. I tried to manage day by day. It didn&#39;t stop me from getting my education," says the 19-year-old.

"(The bullying) made me feel out of place. Sometimes I felt like I was hated to the point that I didn&#39;t want to live anymore. But I kept reminding myself that there&#39;s people all over the world dealing with this in high schools and elementary schools, and they make it through, so if it&#39;s possible for them, I can do it."

The young man realized he was gay at the end of elementary school, but didn&#39;t come out of the closet until he was 17.

His parents and close friends told him they love him just the way he is, but that didn&#39;t stop bullies from making his life miserable.

"I think they should put the rainbow flag in every school, and try to promote the gay students and say to their students, &#39;We accept you no matter what&#39;."

Solomon has already been in a gay relationship. It&#39;s been difficult for him to deal with people calling him names as he walks down the street with his boyfriend.

According to the website for the lesbian gay bi trans youthline, a toll-free phone line for queer youth in Ontario (1-800-268-YOUTH), Solomon&#39;s experience isn&#39;t unusual.

"Queer people are subjected to discrimination, rejection, verbal assaults, and even physical violence. There are many negative stereotypes about queer people that fuel this homophobia and transphobia," the website says.

"Because of these attitudes, many queer people keep the truth of their sexual orientation or gender identity hidden away-we stay in the closet-invisible."

A 24-year-old man attending the flag-raising event spoke to Northern Life on the condition that his name wouldn&#39;t be printed. He came out of the closet recently, and doesn&#39;t want to be judged by his co-workers.

"Part of the reason why I don&#39;t want my name involved is because there&#39;s still quite a lot of gay-bashing and homophobia. Although I&#39;m out with my family and a lot of my friends, I still can&#39;t quite come out at work," he says.

The young man, who attended high school in the city, says he didn&#39;t come out of the closet when he was a teen because he wasn&#39;t sure about his sexuality yet.

"Like anyone else in high school that was just sort of coming out but they weren&#39;t too sure, I never really acted on it too much. I never really got into the whole gay thing until I started meeting other people who are gay and realized maybe that&#39;s who I was."

Another young man at the event also spoke to Northern Life on the condition that his name wouldn&#39;t be printed. He&#39;s told his mother and some friends that he&#39;s gay, but is afraid his "old-fashioned" father will find out.

The 20-year-old says he wasn&#39;t persecuted because of his sexuality at his Valley East high school.

"I hung out with people who didn&#39;t care, and that was it," he says. "Sudbury has gotten a lot better than it was before for gay people. The whole pride thing is really open now.&quot;