Indigenous hip hop and the French-Canadian nightmare: Up Here 5 promises a wild lineup of than 40 acts 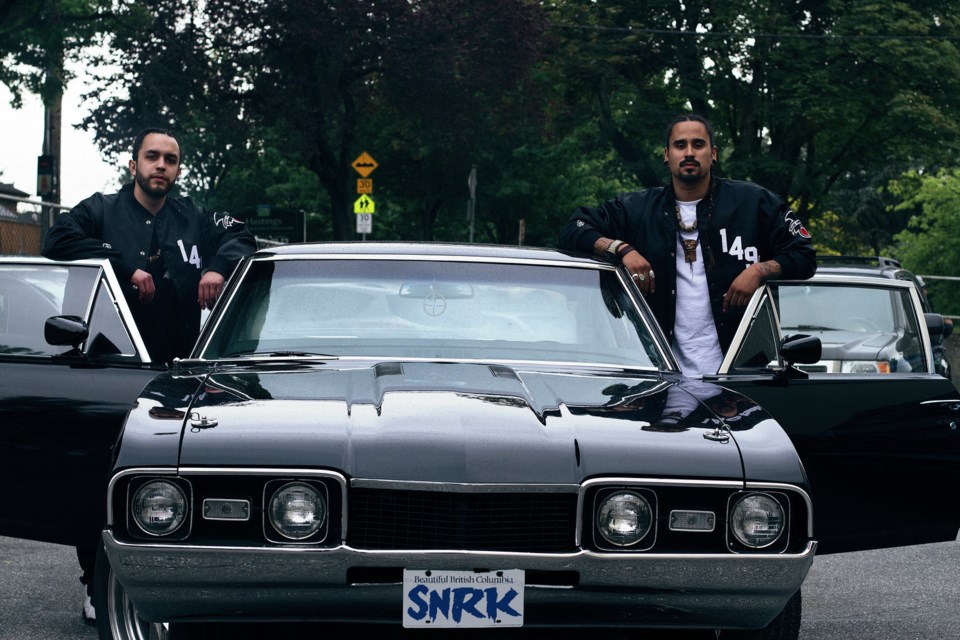 Snotty Nose Rez Kids is one of the acts at this year's Up Here festival. (Supplied)

Up Here, Sudbury’s urban art and music festival, has revealed the headliners and emerging artists that will be a part of its musical programming.

The festival, back for its fifth-anniversary edition, runs Friday, Aug. 16 to Sunday, Aug. 18 in downtown Sudbury.

The festival’s signature geodesic dome (and pop-up bar!) will also return to Durham Street. The main dome area will have its own unique schedule of musical acts and DJs to keep the party going under the sun and the stars.

Access to the festival’s main site is free throughout the weekend. Festival-goers will experience three days of concerts by more than 40 established and emerging acts, witnessing the live creation of new large-scale murals and art installations.

This year’s selection of local artists and public art programming will be announced mid-May.

Passports are now available at UpHere.com for only $110. Individual tickets will go on sale mid-May when the complete lineup and schedule are revealed.

Three nights at the Grand Theatre

Up Here curates an ambitious musical program in line with the event’s signature spirit of curiosity and discovery.

Hailing from the Bronx, ESG formed at the start of Hip-Hop in 1978. They became one of the most sampled groups ever among their contemporaries including Public Enemy, LL Cool J, Marley Marl, and Grandmaster Flash.

Shortly afterwards, they were adopted by the underground dance scene. Today, after a career spanning 41 years, ESG’s sparse, raw, percussion-led sound continues to inspire and influence new generations. This will be their first concert in Canada since 2006.

Their music is best described as thought-provoking club bangers. And their live shows prove it. Audiences will dance and sweat, but they’ll leave with new knowledge. The group is behind the song Skoden that inflamed social media in 2017 and was one of the inspirations behind the Skoden piece on the Sudbury water tower in 2018. Their new album Trapline is out May 10.

Montréal’s Milk & Bone create melodies that are both dreamy and harrowing. Made up of electronic textures and layered synths, the duo’s sonic universe distinguishes itself from the electro-pop genre "thanks to their perfectly paired vocal colours."

Their sophomore album Deception Bay was released in 2018 and won them the Juno for best electronic album of the year.

The self-proclaimed “French-Canadian nightmare” Hubert Lenoir will rattle the Grand with his blend of glam-rock, pop, R&B and soul. His first album Darlène is a “postmodern opera about the coming of age of a generation.” He is a messenger of a new era, free and uncontained by imposed norms.

Reykjavíkurdætur is an all-women hip-hop collective from Iceland united by their love of hip-hop and the urge to rebel against the conservative misogynistic values of modern society.

They have made a huge impact on the music scene in Iceland since they first appeared on the scene in 2013. Now they’re taking the world: tearing down walls and plowing the way for future generations.

Ethiopian-born and Montréal-based rapper Naya Ali burst onto the Québec hip-hop scene like a breath of fresh air.

Her flow, depth, and delivery promise versatility in a uniquely hard hitting and melodic way. Her entry into the game is sure to make a mark.

Delivering a satisfying mix of poppy, rock ‘n’ roll anthems with a pinch of punk attitude, Pale Lips have set themselves apart as a four-piece that always delivers a good time.

Police des moeurs is a synth-pop band formed in Montréal. They play cold, melodic, and nostalgic music for broken hearts and dark minds. Police des moeurs is the soundtrack for the nuclear night, a transition moment between the end of utopia and the final ecological disaster. The world after the future.

Xarah Dion ushers in a unique yet classic sound, infused with coldwave, left-field electronics, and techno, laced with spoken and sung vocals. Dion's new album Plein Nord is a synthesis of her past achievements and dives further into progressive structures and incisive sonorities. Xarah Dion is the ethereal distilled to feverish  sequences and heavy rhythms.

Master guitarist and improviser Yonatan Gat is in a genre all to his own. Unable to play shows in his home country of Israel and refusing to take part in its mandatory military service, Gat relocated to New York City in 2013 and quickly became known as one of the world's top performers.

Currently performing as a four-piece, the new formation combines Gat’s sound with the Eastern Medicine Singers, a group of Indigenous Algonquin drummers from Massachusetts.

In addition to his many hats (creative director at Sappyfest, running You’ve Changed Records, playing guitar in the Constantines), Steven Lambke is one of the finest songwriters this country has to offer. Intimate and universal all at once, Lambke’s songwriting is pristine and his position as one of Canada’s greatest lyricists doesn’t seem to be changing anytime soon.

Camilla Sparksss is a Swiss-Canadian singer, songwriter, musician, and visual artist originally from Kenora in northwestern Ontario. Her music is an instinctive mixture of experimental, lo-fi electronic pop, and melodic collages of a wide range of genre styles performed with turntables, fat synthesizers and cutting vocals.

Cartel Madras is a Calgary-based hip-hop sensation shaking things up across the country. Hailing from South India, sisters Contra and Eboshi are rappers now being hailed by fans and eager listeners-on as they explore sexuality, identity, freedom, race, colour, and gender through their music.

Charlotte Cardin is a brilliantly unique powerhouse that has taken the Québec industry by storm. Without artifice and with a disarming naturalness, she perfectly marries enchanting musicality with poignant emotions. Mixing pop and R&B, the singer's ambitious universe brings magic to all her performances. This special concert is presented by SiriusXM in collaboration with Pop Montréal.

Art d’Ecco is a multitude: an unapologetic, inclusive rock and roll mystic in a wig and lipstick. The fluidity that d’Ecco embraces had its day in the sun with glam rock’s celebration of androgyny, but the mainstream in 2019 is painfully lacking in beyond-the-binary experiences. d’Ecco wants to change that.