It's a hard-rock life for Charlie Rivière

With the impending arrival their new bundle of joy, he's not sure how he's going to pay for school. Paquette said he understands this conundrum: his wife, Tammy Stevens, is training as a nurse practitioner, meaning they're out one income.
Jan 14, 2015 2:36 PM By: Heidi Ulrichsen 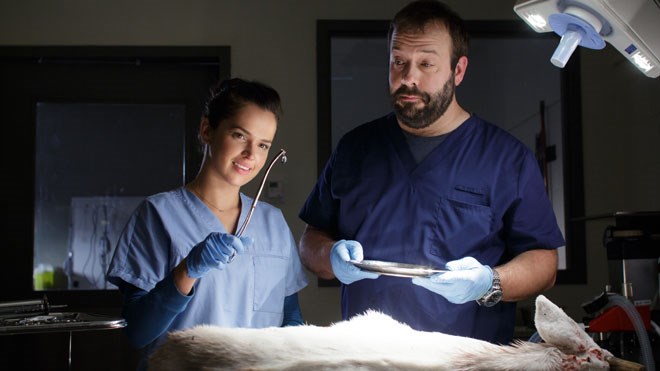 With the impending arrival their new bundle of joy, he's not sure how he's going to pay for school.

Paquette said he understands this conundrum: his wife, Tammy Stevens, is training as a nurse practitioner, meaning they're out one income.

He also shares some of his character's personality traits.

“If anything's going to happen to somebody, it happens to Charlie,” Paquette said, adding that he's often found himself in odd situations.

And then there's the fact that when "Hard Rock Medical" was searching for a location for Rivière's house, Paquette offered up his own Hanmer home. Paquette's real-life daughter, Ambroise, also plays his TV daughter.

These similarities aren't just a coincidence, though. Paquette said he thinks as the show's writers have gotten to know him, they've started writing the character in a way that resembles his own life.

Paquette revives the role in the second season of "Hard Rock Medical," which premieres on TVO at 8 p.m. Feb. 15 with two back-to-back episodes.

For Rivière, the eight-episode second season is largely about his financial woes. He even considers selling his beloved Harley Davidson.

“It's the woes of, you've got to make choices, man,” Paquette said. “Do you keep that materialistic thing you love so much like the Harley, or do you sell it and feed your kids and pay for your schooling?”

Rivière isn't the only character with major life challenges. One of the professors, Dr. Fraser Healy — played by well-known Canadian actor Patrick McKenna — struggles with mental health issues and addiction.

Medical student Nancy Siebolski is forced to confront a challenging relationship with her soon-to-be ex-husband when she finally comes face to face with his new fiancee.

Northern Ontario itself is a character, with the wilderness or the mines as a backdrop. Sudburians should keep a keen eye out for glimpses of local landmarks such as the water tower or the MacKenzie Street murals.

Paquette said he loves that aspect of the series.

“If you stick to the classroom, it could have been filmed anywhere,” he said. “It's a quality production. It's cool that Sudbury's on the map.”

He said he's received enthusiastic feedback to Hard Rock Medical's 13-episode first season in 2013, as well as questions about when the show is coming back.

“The one thing I always get is they always tell me it's too short,” Paquette said. “They say this should have been a one-hour show instead of a half-hour show. If people are saying it's too short, that means they like it for sure.”

Season two episodes will be available online at tvo.org/hardrockmed following the broadcast.