Joanne Polack (who goes by her lifelong nickname, JoPo) and her husband PJ Larabie may both be musicians, but Larabie is also a safety rep at Vale's Creighton Mine, and works at the 8,000-foot level.
0
Nov 27, 2015 4:09 PM By: Heidi Ulrichsen 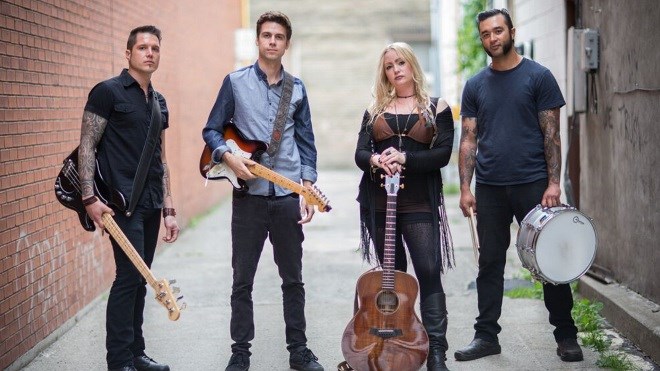 JoPo and the RiZe recently released a single, Miners Town, dedicated to those who work underground. Supplied photo.

Joanne Polack (who goes by her lifelong nickname, JoPo) and her husband PJ Larabie may both be musicians, but Larabie is also a safety rep at Vale's Creighton Mine, and works at the 8,000-foot level.

As many Sudburians can attest, it's a bit of a nerve-wracking thing being the spouse of someone who works underground. There is, after all, inherent risk in descending so far beneath the surface of the planet. It really is another world down there.

That's why JoPo, who was born and raised in Sudbury, and does music therapy at a long-term care home for her day job, decided to write "Miners Town" as a tribute to the men and women who work underground.

“It's all about the world that's going on under our feet,” JoPo said. “It's pretty amazing how men and women in the industry can do this kind of dangerous work.”

The chorus is as follows: “I couldn't imagine not seeing the sun, it's gotta take a toll on their souls, these women and men working so hard, gotta take the time to recognize.”

JoPo and the band she formed last year — known as JoPo and the RiZe — recently released the song as a single. Q92 gave it some local airtime, so you might have heard it already.

It's a heck of a tune, blending blues, country and rock influences, as well as found sounds made by drills and socket wrenches to give it an industrial feel.

The band — which features Jamie Dupuis, Andre Proulx (who's also a miner) and Ben Wardo — is selling the single online in an attempt to raise funds for a full album, which they're currently working on.

The single was recorded live to tape by sound engineer Billy Bruhmuller.

Thanks to the connections of their manager, Suzanne Shawbonquit, the song was mastered by Ron Skinner, who's worked with the likes of Shania Twain and Blue Rodeo.

“He listened to the song, and he liked it, and he agreed to master it, which is awesome,” JoPo said.
“That sort of brings it up to radio quality sound. If you spend the extra money and you get the right people to do it, it sounds pro. We hope to do all of our other songs with him.”

While JoPo, who released a solo album in 2013, is currently fronting a band, it wasn't so long ago that she was, in her words, hiding behind a drum set. For years, she was a drummer and backup singer in bands across the province.

“There was one song where I'd come out front and play the guitar, and they said 'We really like you as a drummer, but you should totally be a front person,” she said. “For eight years I said no because I just wanted to hide behind the drums. I just started songwriting and then taught myself to play guitar. Badda boom, badda bing, here we are. Nuts, eh?”

Those interested in purchasing a digital version of "Miners Town" can do so through iTunes, Apple Music, Spotify, CD Baby, and Amazon, as well as a few others.

JoPo and Proulx will also be performing the song on the Lions Children's Christmas Telethon on CTV at 7:15 p.m. Dec. 5. The band also plans on hitting the road next March for a Northern Ontario tour. Dates will be announced soon.

Tommy and his mommy deliver kindness to neighbours, ninja style!
May 21, 2020 9:50 AM
Comments
We welcome your feedback and encourage you to share your thoughts. We ask that you be respectful of others and their points of view, refrain from personal attacks and stay on topic. To learn about our commenting policies and how we moderate, please read our Community Guidelines.