Picking up the pieces

Leanne and Brad Hulme have been married for nearly nine years. They live together, they work together and they facilitate a divorce course together. But before they built their relationship, they had both been in failed marriages.
Jan 17, 2012 6:23 PM By: Jenny Jelen 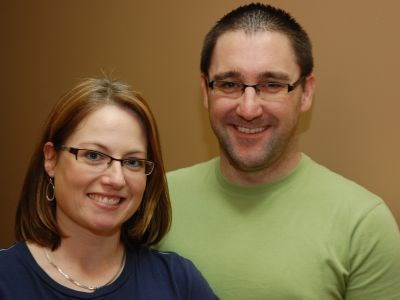 They live together, they work together and they facilitate a divorce course together.

But before they built their relationship, they had both been in failed marriages.

It left them with firsthand knowledge of just how challenging the big "D” can be.

“People don't realize how much they go through in divorce,” Leanne said.

Even though the two have been out of their previous marriages for 12 years, they agreed they still feel pangs of anger and upset when going through some of the segments of Divorce Care, their 13-week course lets single people “unpack” their emotions, deal with major lifestyle changes, learn how to make it on their own and start out in the right direction.

Other areas the program cover include the logistics of the single life, like financial matters.

“We end up taking so much baggage from one relationship to another,” Brad said.

The couple agreed that their struggles gave them real insight into making a difference in the lives of others.

Throughout the winter months, the couple will listen, share and offer insight from the Divorce Care program.

“A lot of people feel when they're divorced, they have this scarlet letter,” Brad said. It's just not the case though — “everybody has some level of mess they need to deal with.”

That's what the program is for.

“It's a really practical curriculum,” Brad said. “By the end of it, you're by no means cured ... but you have the tools to face the new reality you're in.”

In conjunction with the Divorce Care program for adults, another couple is offering a similar program geared toward kids. The same material is covered, so parents can have relevant conversations with their youngsters, who often feel the “traumatic” experiences that come with divorce.

Both programs are offered at Valleyview Community Church (VVCC), located at 2891 Martin Rd. in Blezard Valley.

Jason Tripp, pastor of VVCC, said his parents used to facilitate the program at Glad Tidings.

Watching their experiences with the program made its purpose very clear.

“(Divorce) leaves long-term scars if it's not dealt with,” he said, and added people who have been out of relationships for weeks, months, years or even decades can benefit from taking the course — taking it more than once doesn't hurt, either.

Any and everyone is welcome to participate in the program. A $10 registration fee is charged — children who come with parents are admitted for free.

Additional information about church programs is available at valleyviewcommunitychurch.ca.

Wiki musician Crystal Shawanda on living in Nashville amid ‘terrifying’ U.S. COVID surge
Aug 6, 2020 1:00 PM
Comments
We welcome your feedback and encourage you to share your thoughts. We ask that you be respectful of others and their points of view, refrain from personal attacks and stay on topic. To learn about our commenting policies and how we moderate, please read our Community Guidelines.