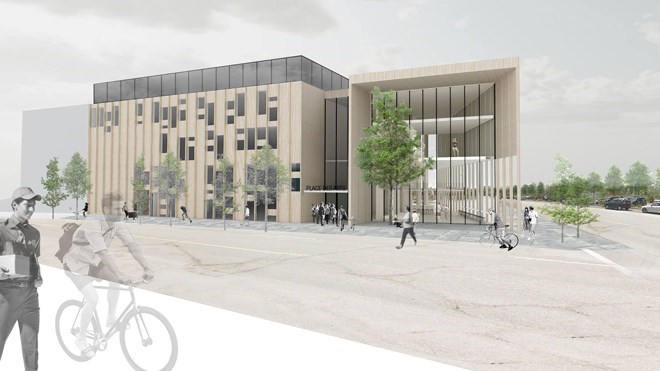 The Yallowega Bélanger Salach Architecture + Moriyama & Teshima (YBSA+MTA) consortium have been named as the architects who will produce the design, plans and final specifications for the Place des Arts building. (Supplied)

The Yallowega Bélanger Salach Architecture + Moriyama & Teshima (YBSA+MTA) consortium have been named as the architects who will produce the design, plans and final specifications for the Place des Arts building.

A press release said this team “brings together experts in the design of cultural buildings and performing arts centres and in construction in Northern Ontario.”

“We are delighted to have a team of experienced, inspiring and sensitive architects on board,” said Place des Arts president Stéphane Gauthier.

“We are entering a phase where the details of the project and our needs will turn into concrete, poetic, livable spaces.

The YBSA + MTA consortium was the best at demonstrating its capacity to produce a landmark building while addressing the technical challenges presented by specialized collective spaces and the downtown terrain.

We are already looking forward to unveiling the final plans for Place des Arts in July 2018.”

The YBSA + MTA consortium is composed of experts based in Sudbury and Toronto, a number of whom are Franco-Ontarians. Its members have worked on various major cultural projects, including the Canadian War Museum in Ottawa, the Waterloo Region Museum and Cultural Centre, the Niagara Falls History Museum, the Discovery Centre in Halifax and the Ismaili Centre in Toronto.

Locally, they are better known for their work in designing the highly acclaimed building that houses Science North.

They are also behind the creation of the recently completed Northern Water Sports Centre, Laurentian University’s Clifford A. Fielding Research, Innovation and Engineering Building, and the Sainte-Anne-des-Pins Parish Church.

“As Francophones, this new, leading-edge facility will be our signature, another way of expressing who we are. It will be our ‘chez nous’.”