Why would someone want to pay to see music that's hundreds of years old when they could just listen to it online for free? Dawn Cattapan, executive director of the Sudbury Symphony Orchestra, said there is an “intangible but intensely-felt bond” that
Apr 11, 2013 8:32 PM By: Jenny Jelen 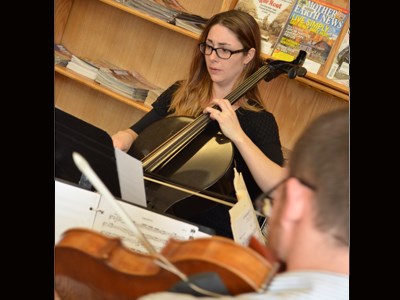 The Sudbury Symphony Orchestra is heading into its 38th season, and audiences can expect more of the live performances that "tell stories and captivate the imagination." Photo by Jenny Jelen.
Why would someone want to pay to see music that's hundreds of years old when they could just listen to it online for free?

Dawn Cattapan, executive director of the Sudbury Symphony Orchestra, said there is an “intangible but intensely-felt bond” that creates a certain sort of stage magic only possible when 50-some musicians take the stage.

“Unlike a CD, no two times we perform are ever alike,” she said.

Instead, each performance is infused with an “extremely vibrant” energy, where each individual performer helps make the show come to life.

As the Symphony heads into its 38th season, audiences can expect more of the live performances that “tell stories and captivate the imagination.”

Cattapan said it will be a “vivid season” with “unforgeable performances.”

It's not just for the regulars either. The symphony has launched two programs to make itself more accessible. Through Share the Music, free tickets will be distributed to young people who would not otherwise have the opportunity to experience live classical performances.

Amped Up! will also make the symphony more accessible to younger demographics.
Anyone 29 years old and younger can purchase single tickets to concerts for $13. There are also season ticket prices for young people.

Upcoming performances for the 2013-14 season include:

SSO Sparkling – Oct. 19, 2013 – The SSO is paying tribute to the “Glitter Man” Liberace. Maestro Brian Jackson, who has become an SSO favourite, will lead the symphony through favourites like Flight of the Bumbelbee, My Fair Lady and That's Entertainment.

SSO Joyful – Nov. 23, 2013 – The SSO will be playing along with the animated film The Bear, just in time for Christmas. Sudbury's own Pamela Teed will narrate the family friendly show. Arts North will also be on hand to offer free kid-friendly activities in the lobby.

SSO Timeless – March 29, 2014 – The SSO will finally say goodbye to its beloved piano, and kickoff a fundraising campaign for a new one, when special guest Sheng Cai will solo in Liszt's Piano Concerto No. 1. A presentation of Haydn's Symphony No. 45 entitled Farewell will also be performed.

SSO Artsy – April 29, 2014 – The symphony is colliding with the Art Gallery of Sudbury for their final concert of the season. Audiences will feel as if they were walking through an art gallery as they listen to the sounds of Mussorgsky's Pictures at an Exhibition, while artists actually paint canvasses live to sounds of the orchestra.

There will also be an off-subscription presentation of The Red Violin in honour of the Academy Award Winning film's 15th anniversary. After the film screens at Collège Boréal's concert hall, the SSO String Quartet will perform a short concert including music from the film.

For more information about the SSO, visit sudburysymphony.com.