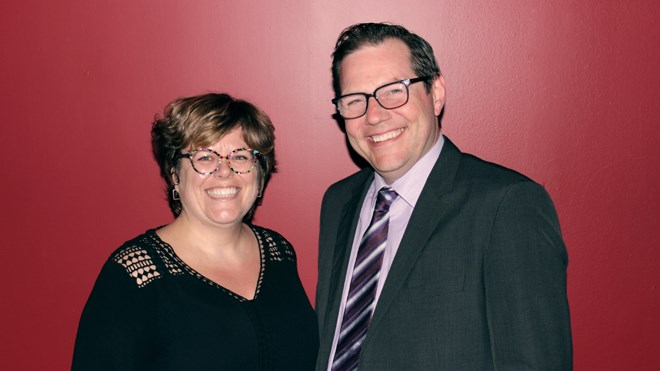 Sudbury Theatre Centre and Le Théâtre Du Nouvel-Ontario are both celebrating their 45th anniversary seasons in 2016-2017.

But the city's major Anglophone and Francophone theatre companies have never actually created a piece of theatre together before.

That will change this fall, when the two companies co-produce Saskatoon native Gilles Poulin-Denis' “Rearview,” nominated for a Governor General's literary arts award in 2010.

The idea of co-producing a play started floating about in 2014, when STC artistic executive director Caleb Marshall joined the theatre company.

TNO artistic director Geneviève Pineault took her new colleague out for lunch, and the pair decided to work on a collaborative piece for what would be both companies' 45th anniversary.

“I ended up sending him the script for 'Rearview,'” Pineault said. “I knew the play in French, and I knew Gilles Poulin-Denis was working on an English translation. And so I thought 'Why not?'”

The English translation, by Maureen LaBonté, received a workshop and public reading by Pat the Dog Theatre Creation at its PlaySmelter Festival in Sudbury last October.

To be presented in French by TNO and English by STC, “Rearview” takes place on a Northern Ontario highway on the outskirts of civilization.

Twenty-seven-year-old Guy, played by local bilingual actor Ryan Demers, fixes his eyes on the road ahead, and keeps his foot on the gas.

The speedometer is stuck, so he doesn't even know how fast he's driving. He has no idea where he is or where he's headed, but memories from the mirror are closer than they appear, and the longer he drives, the more he feels a need to figure out the troubling details of what he's running from.

“From a philosophical point of view, it's something we should be doing as leading artistic institutions in our city,” he said.

“It becomes a real celebration of 45 years of professional theatre in Sudbury. We're working to really integrate artists and technicians and craftspeople from both companies, so it will be a creation by both companies.”

“I think it's just a natural thing that we're co-producing,” she said.

She said she thinks everyone will enjoy the play.

“To see a local actor in a solo piece is always fun,” Pineault said. “It's a generational piece, but pretty much anyone can identify with it.”

“Rearview” will be presented in its original French-language version at TNO Oct. 13-22. It will have its English-language world premiere at STC Nov. 3-9.

Both STC and TNO are releasing their full season lineups over the next few weeks — STC on April 13 and TNO on May 12.

Keep watching NorthernLife.ca for full details as they emerge.