“Hit The Ice” is set to launch its second season this week, with four players from Ontario, including Sudbury resident, 18 year-old Khadyn Butterfly.
0
Feb 25, 2014 5:26 PM By: Mariyam Salmanzadeh 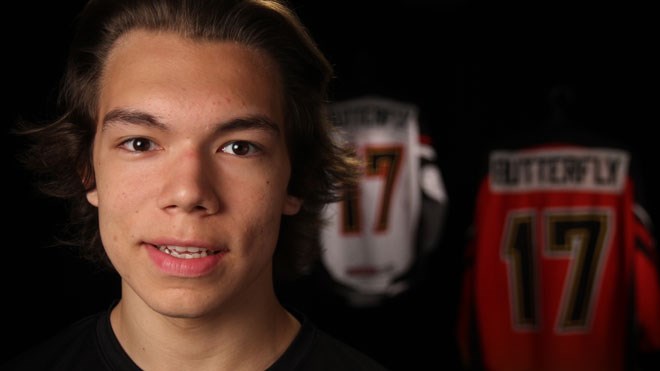 John Chabot returns as head coach to prepare Butterfly and 24 other 16- to 18-year-old Aboriginal hockey prospects for showcase games in front of junior and NCAA scouts, ultimately giving them the opportunity to take their hockey career to the next level.

The show's co-director, Sonia Boileau, says the show begins with Chabot attending the National Aboriginal Hockey Championships to scout his team and create a roster of the best players from each province. Hit The Ice is produced and directed by Jason Brennan.

Among them is Sudbury’s Butterfly, originally from Moose Cree First Nation, who played Junior A with the Nickel Barons during the 2012-2013 season.

Boileau says Butterfly “was one of the top players in the entire tournament and John definitely wanted him on the team.”

“The players were also very fortunate as they had many NHL pros work with them both on and off the ice, like Maxime Talbot (Anaheim Ducks), Pascal Dupuis (Pittsburg Penguins), Marc Methot (Ottawa Senators), Derrick Brassard (NY Rangers), Jordan Nolan (Stanley Cup winner LA Kings) and many more,” says Boileau.

While there are many guests, every episode revolves around the players themselves and their journeys, explains Boileau.

“They all have their highs and lows; from injuries to run-ins with other players or with coaches, to being homesick or just being sick,” she says.

“It is a TV show but above all it’s a chance for talented Aboriginal hockey players to get noticed by scouts who wouldn’t otherwise get to notice them.”

Sudbury families are painting their windows in solidarity — send us your pics!
Apr 1, 2020 2:45 PM

Hey Sudbury shutterbugs, we still want your photos for our In Focus feature
Apr 1, 2020 1:30 PM

Tommy and his mommy, Day 13 - growing grass heads for the garden
Apr 1, 2020 10:01 AM
Comments
We welcome your feedback and encourage you to share your thoughts on this story. We ask that you be respectful of others and their points of view, refrain from personal attacks and stay on topic. To learn about our commenting policies and how we moderate, please read our Community Guidelines.