The blobettes are coming to GNO this week 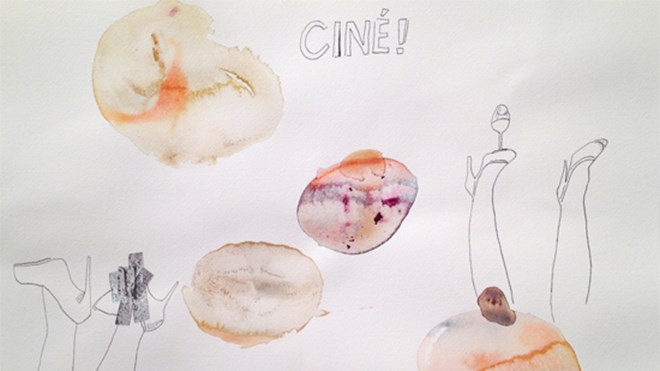 Toronto artist Ron Loranger will create a new 30 foot artwork populated with a community of newly minted blobettes from Oct. 12 to 16 at Galerie du Nouvel-Ontario. Supplied photo.
Toronto artist Ron Loranger’s work is immediately playful and boisterously expressive. Through the careful manipulation of watercolour pigments, the artist has been exploring the shapes he’s nicknamed “blobettes” for more than 20 years of artistic practice.

During a residency at Sudbury’s Galerie du Nouvel-Ontario (GNO), he will create a new 30 foot artwork populated with a community of newly minted blobettes.

The blobettes (a peculiarly franco-ontarian play on the word “blob”) are what’s left once a pool of liquid, patiently mixed with pigment, evaporates. The resulting forms stretch out, bounce around and interact with one another on white watercolour paper.

While certainly abstract, the blobettes do bear a certain resemblance to amoeba or other unicellular organisms spied through the microscope. Each blobette is a world unto itself, a microcosm of intermingling colours and textures.

In addition to the blobettes, Loranger’s artwork includes line drawings of objects and symbols plucked from the various newsfeeds he consults daily on his smartphone. And so the blobettes rub up against a variety of seemingly random things such as underwear, the old TVOntario logo, or solitary words ripped from their original context.

With all of Facebook and Instagram at his disposal, not to mention his favourite online newspapers, you could say that Loranger produces digital art in reverse, reproducing by hand the ephemeral shapes drawn by pixels on a screen.

While the blobettes are veritable pools of colour, their surroundings are rendered in black and white. It would seem perfectly normal to see them peel themselves off the paper and float up to the cosmos like the giant amoebas or tiny planets they resemble.

Originally from Kapuskasing, Ron Loranger is a Franco-Ontarian visual artist based in Toronto. His practice involves watercolour and India ink on Arches paper, but also takes the shape of painted installations in urban settings.

Loranger is very much involved in the world of artist-run centres: indeed, he has been part of several boards and committees, such as B.R.A.V.O.-SUD, Galerie du Nouvel-Ontario (GN-O) and Le Labo.

His professional experience includes exhibits in private galleries in Toronto, New York City and Berlin, and in public galleries, such as Kapuskasing’s Galerie Paquin, the Sudbury Art Gallery and the Glendon York University Gallery.

He also took part in the Biennial of Textile Art in San Jose (Costa Rica) and the Fair of Alternative Art of Sudbury (FAAS). His works are part of private collections throughout North America and Europe.