You don’t hear as much about Take Off Pounds Sensibly — better known as TOPS — as much as you once did, but for many people it has been key to healthier eating
0
May 27, 2019 11:52 AM By: Carol Mulligan, for Sudbury.com 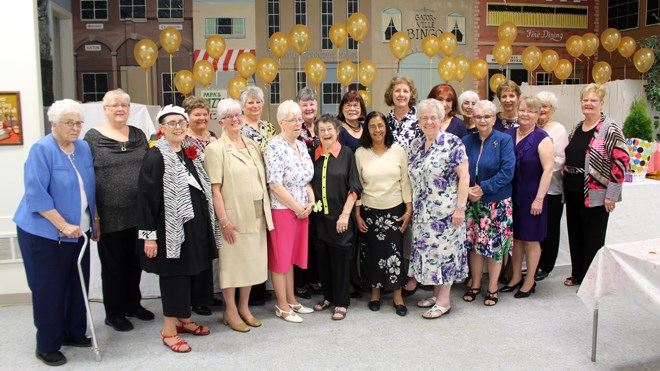 Members of the Lively chapter of Take Off Pounds Sensibly (TOPS), a weight-loss and healthy eating group, celebrate the chapter’s 50th anniversary on May 22 at Trinity United Church in Lively. (Matt Durnan / Sudbury.com)

Evelyn Cole doesn’t remember a time she wasn’t overweight. The 87-year-old doesn’t know how she tipped the scale at birth but recalls an aunt visiting when she was 13 and telling her mother: “Put a corset on her, she’s so fat.”

Cole struggled with her weight all her life, trying unusual diets and gimmicks including treatment at a place on Edna Street in Sudbury where one’s body fat was rolled with a spring-loaded machine. Cole called it torture. She lost a few pounds but quickly put it back on.

She was never obese, but when Cole was 37, she took the well-intentioned advice of a friend – a thin friend – who suggested she attend the first meeting of a group called TOPS (Take Off Pounds Sensibly), being held in the basement of a resident’s home in Lively in February 1969.

Cole was there when the Lively TOPS received its charter that year and was delighted to celebrate the club’s 50th anniversary at a dinner May 22 at Trinity United Church in Lively. The event featured former and current TOPS members as well as invited guests and dignitaries.

When the chapter began, members called themselves the Lively Livewires, and weighed in behind a bed sheet hung in the basement meeting room. The person who gained the most weight that week was required to wear a pig bib. Cole admits she wore that bib on more than one occasion and, while it embarrassed some people, it didn’t bother her. TOPS has long since abandoned the practice.

The group’s philosophy is built into its name — eating sensibly — and it has worked for Cole for five decades. No fad diet, members eat meals based on Canada’s Food Guide and the advice of their family physicians. (You must have a doctor’s note to join.)

When the Lively chapter began, Cole was the busy mother of three children aged 17, 15 and six. She made a commitment to attend TOPS every Wednesday evening, regardless of what else was going on in her life. It’s a promise to herself she has kept for 50 years.

Her husband used to tell the family not to expect Evelyn to do anything else Wednesday night because she would be at her TOPS meetings.

“I lived for Wednesday nights, to see whether I gained or lost weight,” Cole said this week.

When she “graduated” from the program eight years ago, she had lost 52 pounds – despite the fact it usually gets more difficult for people to shed weight as they age.

The TOPS philosophy of sensible eating and “not crazy dieting” did the trick for Cole and still does for a steady group of 15 to 20 people who attend weekly meetings at Lively District Secondary School on Wednesdays. Meetings run from 5:30-8 p.m. and feature weigh-ins and guest speakers on a wide range of topics.

Members establish realistic weight goals in concert with their physicians and work toward them without the pressure of some other weight-loss programs. It would take the plucky senior 42 years to reach her goal weight and become a member of TOPS’ maintenance group KOPS (Keep Off Pounds Sensibly). In those eight years, Cole has never strayed more than two pounds above her goal weight. (Members have a 10-pound leeway of being seven pounds under and three pounds over their goal weight.)

The healthy lifestyle Cole took up 50 years ago has stood her well.

“I’m amazed at the things I can do,” she said this week, adding that she can outdo people 25 years younger than her.

TOPS has kept Cole “on the straight and narrow” for five decades, she said, and she believes it is as relevant a program today as it ever was. In these days of low-carb, no-sugar diets, Cole says members can eat any food they like if they plan for it. She rarely goes a day without three small squares of the dark chocolate she loves so much.

She stuck with the program “because I was dedicated and I was involved,” said Cole, who is group leader. She also enjoys the camaraderie of the group.

It costs $46 a year to belong to TOPS and there’s a monthly fee of $6. Members receive a magazine with healthy eating tips and inspiring stories of people who have lost weight. Cole is proud to have been featured in the magazine for her efforts.

TOPS, which has two groups in Sudbury as well as the Lively chapter, does not meet during the summer months. New members are always welcome. For more information, visit TOPS’ website at TOPS.org.

Carol Mulligan is an award-winning reporter and one of Greater Sudbury’s most experienced journalists.

Here are 7 stories to start your day
0