Up Fest: This might be the coolest weekend this summer

Murals and the cute oh-so-Sudbury buttons with sayings such as “Wolf on a Wire” and “I love the smell of sulphur in the morning” are also the We Live Up Here crew's doing. The friends, with the help of numerous volunteers, step things up a notch Aug.
Aug 10, 2015 3:35 PM By: Heidi Ulrichsen 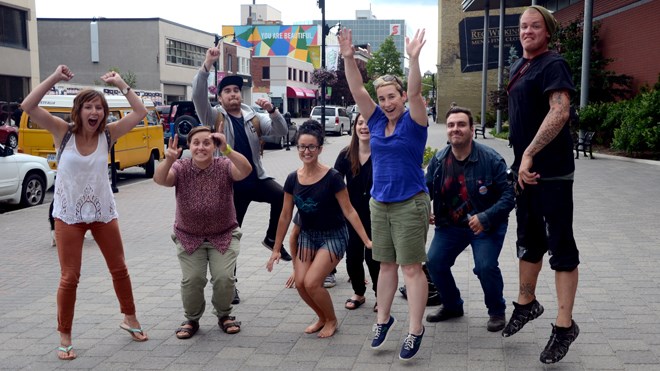 The organizers of Up Fest can't wait for the brand-new Aug. 13-15 art and emerging music festival. Photo by Arron Pickard.

Murals and the cute oh-so-Sudbury buttons with sayings such as “Wolf on a Wire” and “I love the smell of sulphur in the morning” are also the We Live Up Here crew's doing.

The friends, with the help of numerous volunteers, step things up a notch Aug. 13-15 with Up Fest, a new art and emerging music festival.

A Tribe Called Red, a Canadian electronic music group, who blend instrumental hip hop, reggae, moombahton and dubstep-influenced dance music with elements of First Nations music, particularly vocal chanting and drumming, are among the entertainers. Tanya Tagaq, an Inuk throat singer from Nunavut, will also perform, as will Suuns, a rock band from Montreal.

Durham Street will be closed down for the festival — in a quirky turn of events, organizers will lay down sod on the street — and will be renamed the Shkagamik-Kwe Playground for the occasion.

Some of the performances will take place on Durham, as well as other venues throughout the downtown, including The Townehouse Tavern, Fromagerie Elgin and the Grand Theatre.

Those that download the Up Fest app will be privy to surprise downtown concerts during the festival.

“Oh man, it's going to be crazy,” said Pelletier. “It's emerging music, so people should come in with an open mind and expect the unexpected and get ready to discover some artists that they don't know and be completely blown away.”

If that weren't enough, seven murals are being created in the downtown in the lead-up to the festival.

“They'll be there for decades to come,” Knapp said.

A Rainbow Concrete cement truck will be painted in the middle of Durham Street during the festival, creating a moving mural.

There'll also be several art installations, including a 40-foot kaleidoscope in Memorial Park and projections on downtown buildings.

An exhibit called Dear Sudbury by artist Taylor Jones will be set up at the Grand Theatre. It will feature people's old photos of Sudbury, which are rephotographed in context.

Up Fest is capped off with an all-night art crawl Saturday.

“It's going to be a lot of little, beautiful moments,” Pelletier said.

To learn more about Up Fest, or to purchase tickets, visit UpFest.ca, visit Up Fest on Facebook or download the app at the Apple App Store or on Google Play.