UFO researcher Michel Deschamps was young when he first laid eyes on a UFO in Hanmer. “At nine years old, I wasn’t sure if I just memorized something I saw on TV,” he said. “Years later, I still doubted myself.
Jun 16, 2010 7:28 PM By: Jenny Jelen 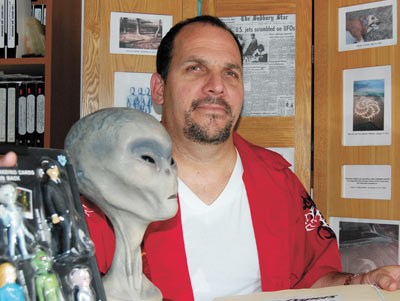 UFO researcher Michel Dechamps has compiled all of his local findings on a website, www.noufors.com. The website includes information about local sightings, UFO encounters and how to spot a UFO from a plane. Photo by Jenny Jelen

UFO researcher Michel Deschamps was young when he first laid eyes on a UFO in Hanmer.

“At nine years old, I wasn’t sure if I just memorized something I saw on TV,” he said. “Years later, I still doubted myself.”

He has been researching UFO encounters for years. His scrapbook holds about 350 newspaper clippings from 1947 onward, and he has filled an entire bookcase with documentaries and videos. He has given lectures about extraterrestrial life, and appeared on talk shows.

“I’m still astonished by all the stuff I’ve found,” he said.

“People have assumed that I’ve jumped to conclusions,” he said. But nothing makes its way to his website, www.noufors.com, without thorough research.

“I want to make sure I verify stuff.”

Northern Ontario UFO Research and Study (NOUFORS) tracks the history of UFOs in northern Ontario. The three-year-old website was created for educational purposes, to help people share their encounters and learn more about UFOs.

“Knowledge is meant to be shared,” Deschamps said.

We don’t have anything that flies that fast.

On noufors.com, he lists some quick ways to determine if flying machines are simply planes, or if they are actual unidentified flying objects.

“Planes move in a very, very predictable way,” he said. “These things don’t.”

He said characteristics like shape, colour, size, speed, behaviour, sound, level of strangeness and duration of the sighting can be telltale signs.

Deschamps said one reported UFO sighting was measured by an employee at the former Radar Base in Hanmer. The employee clocked a flying object at 20,000 miles per hour. “We don’t have anything that flies that fast,” he said.

The way an object maneuvers can be a sign, too. The rate it accelerates, and how it moves from left to right and front to back are all indicators.

Deschamps said sightings can happen any time of day, in any place. However, they usually occur when they are least expected. He said after someone has one UFO sighting, they will often have more, because they are more aware of what they’re looking for.

Even though he said he is certain of their existence, Deschamps isn’t fearful of UFOs. He said he believes if they wanted to cause harm, they could have done it by now.