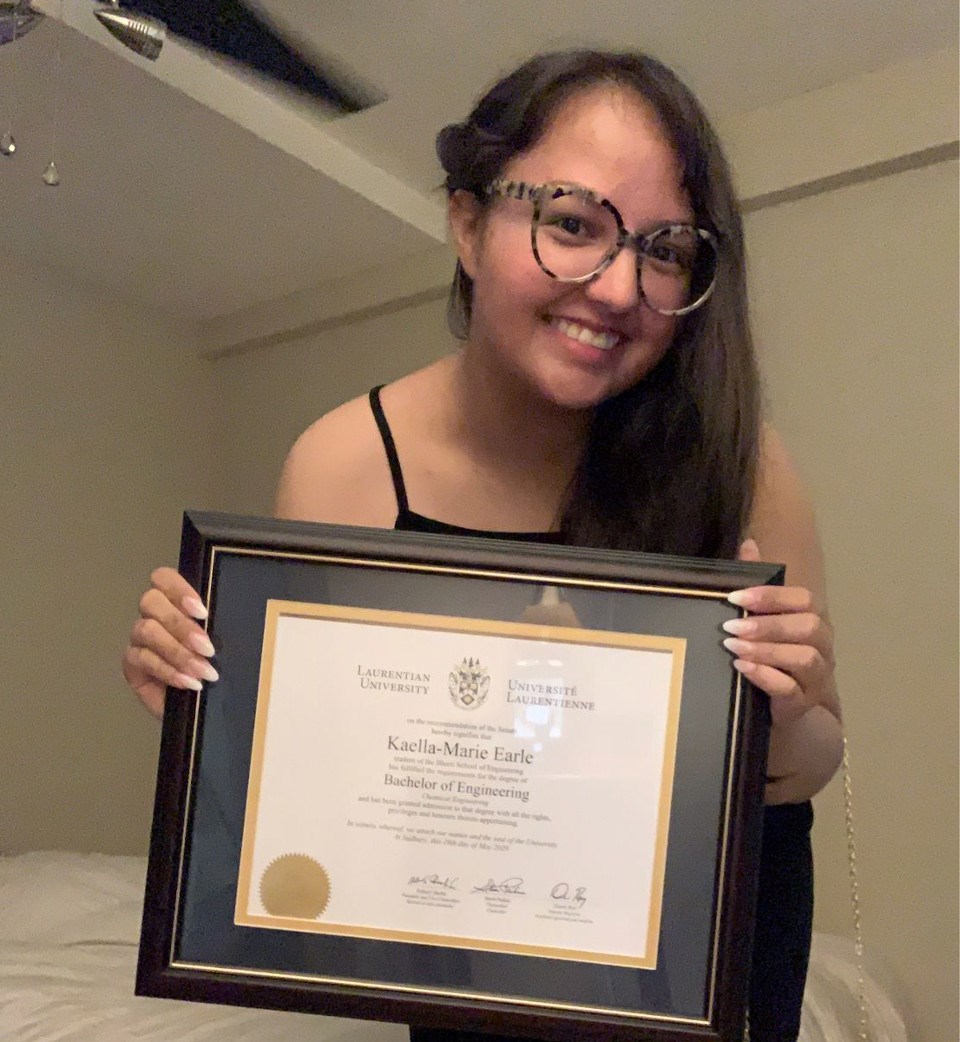 An aspiring Indigenous leader from northeastern Ontario is ready to make her voice heard in a national forum.

Kaella-Marie Earle, an engineer-in-training with Enbridge Gas and member of Wiikwemkoong Unceded Territory on Manitoulin Island, is taking a seat with the inaugural Indigenous Advisory Committee of the Canada Energy Regulator (CER).

The CER was formed in August 2019 to replace the former National Energy Board, the federal regulator of pipelines, power lines and imports and exports of energy products. The updated mandate of the Crown organization is to transition Canada to a low-carbon economy and bring about greater participation for Indigenous people in the energy sector.

Earl is one of eight people recently named to the newly formed committee. She’ll meet her colleagues when the group convenes - virtually - for the first time next week; the first of four annual meetings over her two-year term.

The committee members are drawn from First Nation communities and organizations across Canada, each representing a diverse range of knowledge and unique perspectives of the industry.

Included among those respected voices is Chief Harvey McLeod of the Upper Nicola Indian Band, whose territory lies across the Trans-Mountain pipeline route in northern British Columbia.

Earle said it's the first time a Crown corporation has instituted such a committee.

“It’s pretty special for that reason alone,” said Earle, a Laurentian University engineering graduate and who works as a construction project manager for Enbridge Gas in the Chatham-Kent area of southwestern Ontario.

“It’s incredible that I was chosen. I feel really lucky and humbled by that.”

Earle applied for the position earlier this year after skimming the CER posting on LinkedIn. Though not initially sure of the parameters of the committee’s responsibilities, she thought: “I would love to be a part of this.”

The committee won’t be making decisions on specific energy projects but will assist the CER’s board of directors on strategy issues.

On the board is one of Earle’s mentors, Melanie Debassige of M’Chigeeng First Nation on Manitoulin Island. Debassige is the executive director of the Ontario First Nations Technical Services Corporation and was celebrated last year as one of Canada’s Top 100 most powerful women.

“I think it’s important to acknowledge her,” said Earle. “I think it’s amazing that’s she done this and she really blazed a trail for me to even exist at that level.”

Earle’s earlier internship with Enbridge served to reinforce a belief that Indigenous people must be included in energy projects at the earliest stage of development. She remains a staunch advocate for the inclusion of women and Indigenous people in the energy and natural resources fields.

Within the last year, pipeline projects in Canada have been an intense focus of environmental protests and Indigenous activism, particularly in Alberta and British Columbia.

The conflict surrounding these large infrastructure projects probably played a factor in the committee’s creation, Earle suspects, but she believes it’s largely the outcome of building social pressure being applied across the entire energy landscape.

Many progressive organizations, she finds, are recognizing the need to address reconciliation and participation by Indigenous people and are implementing plans to achieve those goals.

“A lot of companies have no grasp for how relations need to occur,” Earle said. “And I’ve seen a lot of success from energy companies that provide Indigenous relations support at the top of the team, at the executive level.”

Indigenous people, she said, are the original inhabitants of the land, have unique agreements with the Crown, and can’t be lumped in with other project stakeholders. “They have to be made separate from everyone else.”

When asked for her perspective on being an Indigenous women, embarking on a career in a STEM (Science, technology, engineering and mathematics) field during a time of national reconciliation, Earle laughs, pauses, and offers that she feels optimist about Canada’s future.

“In the past couple of years in my engineering career, I’ve noticed a lot more Indigenous people coming into the industry in leadership roles; lawyers, engineers, environmental scientists.

“Many of those people go into these careers with the goal of weaving in their cultural knowledge to either battle climate change, bring some sort of improvement to their home community, or advocate for Indigenous people in the workplace.

“Because of seeing that, and the positive impact it’s having on industry, I would say that I feel mostly hopeful about the future.”

One idea Earle wants to bring forward is the creation of a collaborative database for industry to better consult with First Nations on energy projects.

“Every Indigenous nation is considered sovereign. They have their own consultation and permitting requirements and protocols that are unique to that community.

“The problem with that is there is no standard way of approaching how each company has to talk to them about what’s happening (project-wise).”

Such a database, she believes, would serve as a critical cultural bridge to help steer the consultation process, provide meaningful engagement, deliver palatable project information to the communities, save companies money, and provide down-the-road project procurement opportunities for communities.

“A tool like this, perhaps if it came from industry and CER would help that engagement become more meaningful. Definitely something I would advocate for.”

Was this made in Ontario? Province unveils directory for that
Nov 6, 2020 8:00 AM
Comments